Skip to content
Home
All News
Germany to Georgia – The Museum of Georgian Script
The estimated reading time is 4 minutes
Nini Longurashivili
May 2, 2022 at 7:02 pm

„Art is a constantly evolving process that expresses changing themes and attitudes. Today, I can boldly say that as an artist, I know myself well, though the process of self-searching is endless,“ says Teona Kokhodze to Forbes Georgia. Our respondent is an artist, who since her youth developed a strong interest in art creation and performance.

„After winning the Argentinian ‘Bienal Internacional de Arte Infantil y Juvenil’ in 2001, I decided to continue painting, which looking back upon now was certainly the right path. I have had a number of exhibitions not only in Europe but also in the USA. From 2014 to 2015, I took part in the international art residency ‘Pilotenkueche,’ based at the Spinnerei Galerie in Leipzig.

I work primarily through the medium of mixed media painting whilst also experimenting with sculpture and installation artwork. In 2015, I was accepted into the Academy of Fine Arts in Munich.“

It turns out that the beginnings of your career are connected to Germany?

Discovering Emil Ruder, Massimo Vignelli and Wolfgang Weingart was a life-changing experience; a whole new world appeared in front of me, and I immediately wanted to dive into it! So, I decided to move to Berlin to realize my dreams.

The education and knowledge that I gained in Germany helped me to develop discipline, critical thinking and a sharp eye for detail, which I believe is necessary for any successful design project – good design means always questioning assumptions and being able to justify the presence of every tiny element. Moreover, the experimental approaches that I was taught at university opened my mind to the world.

From an early age, I began to develop a strong interest in art and performance. In 2001, I was awarded the prestigious annual Argentinian prize for international youth art. After graduating from the competitive environment of the Tbilisi State Academy of Arts, I was accepted into the Academy of Fine Arts in Munich, in the faculty of graphics. During a process of constant research, from 2010 onwards, I had two solo and multiple group exhibitions not only in Europe but also in the United States. In 2018, I continued my study in communication design at BTK – College of Design Berlin. 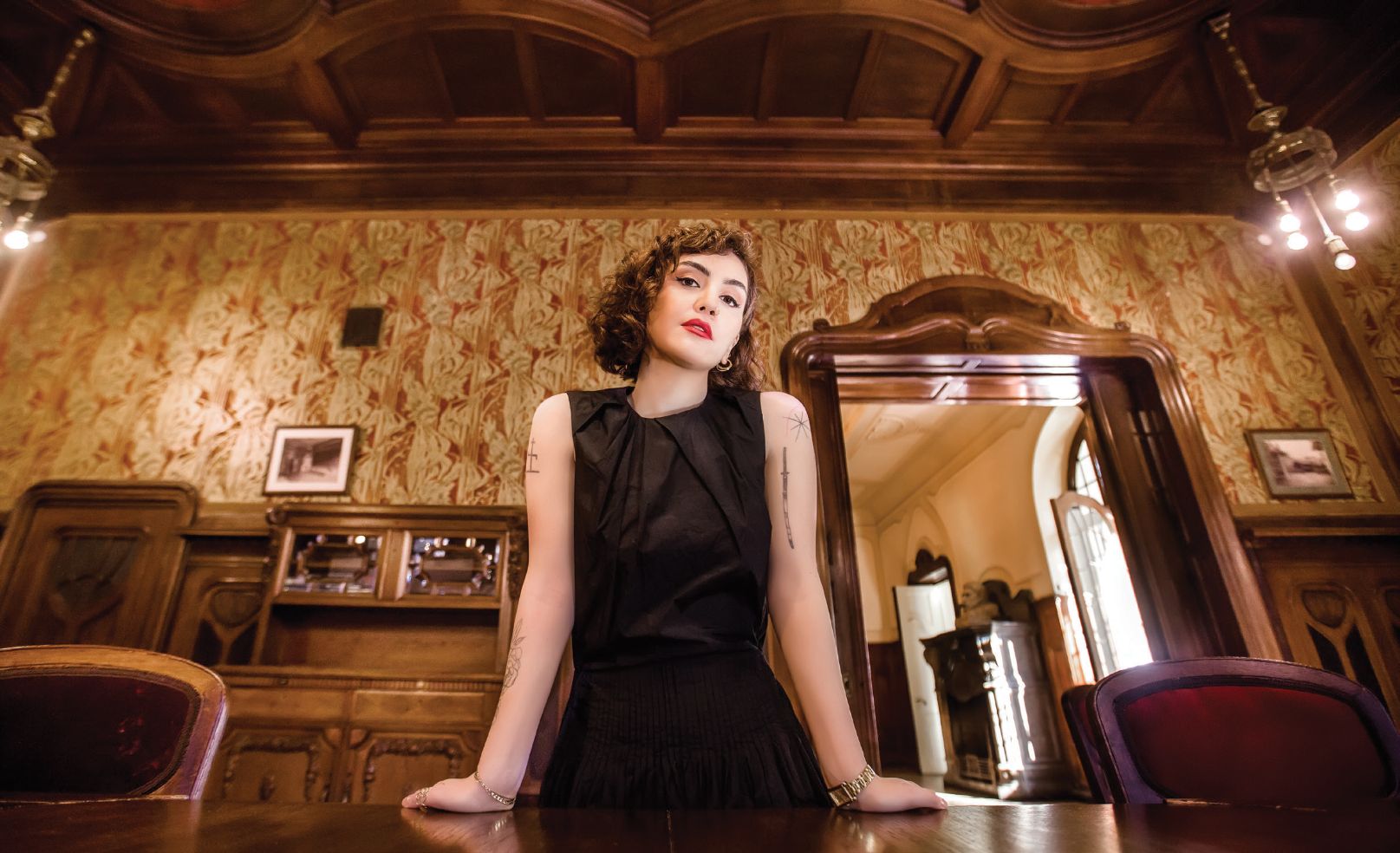 After living and studying in Germany, how has the country impacted you professionally?

At university, whilst still a student, I was offered a job at an art and design graduate exhibition. I have extensive experience in this field, but it was interesting for me to organize specifically an online exhibition. During the Coronavirus pandemic, students were not allowed to exhibit their course work in physical spaces. My task as a communication designer was to create an online exhibition space where visitors could view artists’ works live and interact with the artists. This project turned out to be a big springboard for me, and I have been working in this field for about four years now. My posters were presented at the ‘Mercedes Benz Arena Berlin;’ it is really lovely when you see your work physically out in the world.

You worked on a project called ‘The Museum of Georgian Script,’ which sounds fascinating – what motivated you to work on this project?

I have just finished my diploma project entitled ‘The Museum of Georgian Script,’ which I have been working on intensively for the last six months and it was recognized as the best piece of coursework in my class.

My desire to focus on the earliest stage of Georgian script was rooted in the mysterious circumstances that led to its creation in terms of paleographic and visual development. Gaining knowledge, specifically the system of its structure, rules of sustainability, and the initial dominant forms, helped me to create not only a logo system for the museum but also work on its visuals and sub-identities.

‘The Museum of Georgian Script’ is a fictional institution of living thought. The building illustrates and documents the story of Georgian writing development from its beginnings to the present. As such it acquires, conserves, researches, communicates, as well as shows the tangible and intangible heritage of humanity. The museum provides a space for the material culture that is currently preserved in several different institutions. The collection is accessible to the public and provides visitors with an accurate and complete retrospective history of the Georgian script.

Tell us more about the architecture of the museum.

The architecture of the museum, like the branding, is inspired by AsoMtavruli script forms, which involve a combination of a circle, a half-circle, and a straight line. The multifunctional building includes spaces of different sizes, permanent and temporary exhibitions, a library, a research centre, an open space for workshops, a storage room, a museum shop, and a cafe. Each floor depicts the stages of evolution of the Georgian alphabet, which are exhibited chronologically and are connected to the central atrium. The first floor covers the nearest phase of development up until the military period; Nuskhuri is located on the second floor, and the third floor is an illustration of the artefacts around AsoMtavruli.

The creation of ‘The Museum of Georgian Script’ serves to raise awareness of this topic among both Georgian and foreign visitors.

Was that your desired goal?

My desire was to gain experience in Germany, at the same time, I always wanted to implement a Georgian project there – a part of my culture – that, in the end, reflected very well on my dissertation.