Skip to content
Home
All News
The Quality of Construction in Georgia Is Growing
The estimated reading time is 6 minutes
Forbes.ge
December 22, 2021 at 3:00 pm

The global recession caused by the coronavirus pandemic has engulfed almost every area of ​​the global economy. However, there are isolated examples that even in the most negative situations, sometimes truly amazing things happen. By the end of 2021, it became clearly visible that the housing construction sector in Georgia is undergoing active development. In the face of difficult world realities, this most important component of the national Georgian economy has shown record growth.

The official reports of the state statistical office “Sakstat” contain information on a huge number of building permits issued in 2020-2021, in total, more than 5 million square meters of housing under construction and commissioned. This made it possible for Georgia to overtake many of the much more successful countries of the European Union according to these indicators.

Real estate sales in 2021 grew significantly, despite a slight decrease in some specific areas. Experts say that today the market is intensively compensating for the opportunities lost during the quarantine period. Tbilisi and Batumi predictably remained the sales leaders – the aggregate share of these markets is more than half of the national one.

At the same time, there is one major problem – the quality of construction. This issue is not something exclusive, as experts say, it is common in all southern countries. The low quality of the facilities being built is caused by the desire of developers to cut costs by saving on building materials and labour. It means a deterioration in the quality of the final product. In Georgia, this topic has many times become the subject of discussion in the media and in local authorities, and several times this has ended in tightening building regulations.

In general, this gave a positive result – the quality of construction began to improve, coming to the fore in terms of quantity. This allowed progressive developers to stand out in an increasingly competitive environment. Clients have also become more demanding and now it is not enough for them to offer just a product – it must be built in accordance with new requirements. This path was once passed by all developed Western markets, and today it is Georgia’s turn to grow to new world standards.

It is very expensive to fix issues in mass buildings. Historical fact: in the early 2000s, part of the high-rise buildings built in the 70s had to be massively dismantled in New York. In just 25-30 years, metal fatigue led to the fact that their structures became weak, and buildings could collapse at any moment. In their place, new skyscrapers were erected, which complied with much stricter regulations.

Experts agree that the buyer is becoming more choosy, therefore, as elsewhere in the world, those companies that will work for progress will win in Georgia. Such developers are already considering not only the current but also the future requirements of the building regulations. This gives them the opportunity to be two steps ahead of their competitors since their houses already have a margin of safety of at least 150-200 years against today’s standard 30-50 years. The main conditions for achieving such indicators of durability are the highest quality of building materials and the use of innovative technologies in work.

As an example of working at the level of world standards, we can mention European Village LLC – the leading company in this area. The company engaged in low-rise construction on the Black Sea coast in the vicinity of Batumi. The principles of work applied by the company have already become a certain starting point by which one can judge the tendency of introducing international norms in Georgia. The company builds premium and elite class villas in the most sought-after resort locations using the most advanced technologies today.

Experienced builders know that a solid foundation is key to a building’s longevity. Therefore, the base of the house will always be fully insulated and waterproof, despite the subtropical warm local climate. This guarantees reliable protection against the negative effects of atmospheric precipitation, groundwater and provides an excellent thermal efficiency of the building. The foundation must be equipped with a moisture removal system, and the soil under the base of the house is strengthened with solid rock.

The Black Sea coast of Adjara is seismically unstable – from time to time there are quite tangible earthquakes here, therefore all the villas of the European Village are designed with this issue in mind. Moreover, the building structure has a safety factor 1.5-2 times higher than the required standard. Reinforced concrete parts of the building are made using a penetron – a waterproofing component that enhances the level of water resistance up to class w20 and improves the properties of concrete up to grade M600. Thanks to this, the maximum protection of the walls of the house from mould and mildew is achieved, and the service of the reinforced concrete structure is possible for up to 200 years.

The characteristics of the building blocks from which the walls of the building are constructed are also of paramount importance. The European Village company builds from a durable double ceramic block, produced in Georgia using Spanish technology. Most other developers use inexpensive foam blocks or cement blocks, so the standard wall thickness of their houses is 20 cm. Premium and elite class villas boast external walls 40 cm thick. This standard is usually used in countries with cold climates, therefore for subtropical Adjara, this is an extremely high level, which is practiced only by European Village LLC. Walls with a thickness of 40 cm increase the thermal efficiency of the building by three times, its durability and strength. The house will serve several generations of residents for 150-200 years.

The leader of the suburban real estate market pays great attention to fire and the environmental safety of materials. Insulation of the facade is made from a non-combustible layer of EPS and XPS, and then covered twice with a moisture-repellent putty and three times with Terraco acrylic silicone paint.

Waterproofing of houses is a priority in the work of the company; in conditions of high humidity of the local climate, this is of decisive importance. To protect the house as much as possible from dampness, a separate waterproofing of the roof, slopes, terraces is performed using combined preparations from the Swedish brand Terraco. A triple layer of waterproofing is successively applied to all surfaces which give the best reinforcement possible. 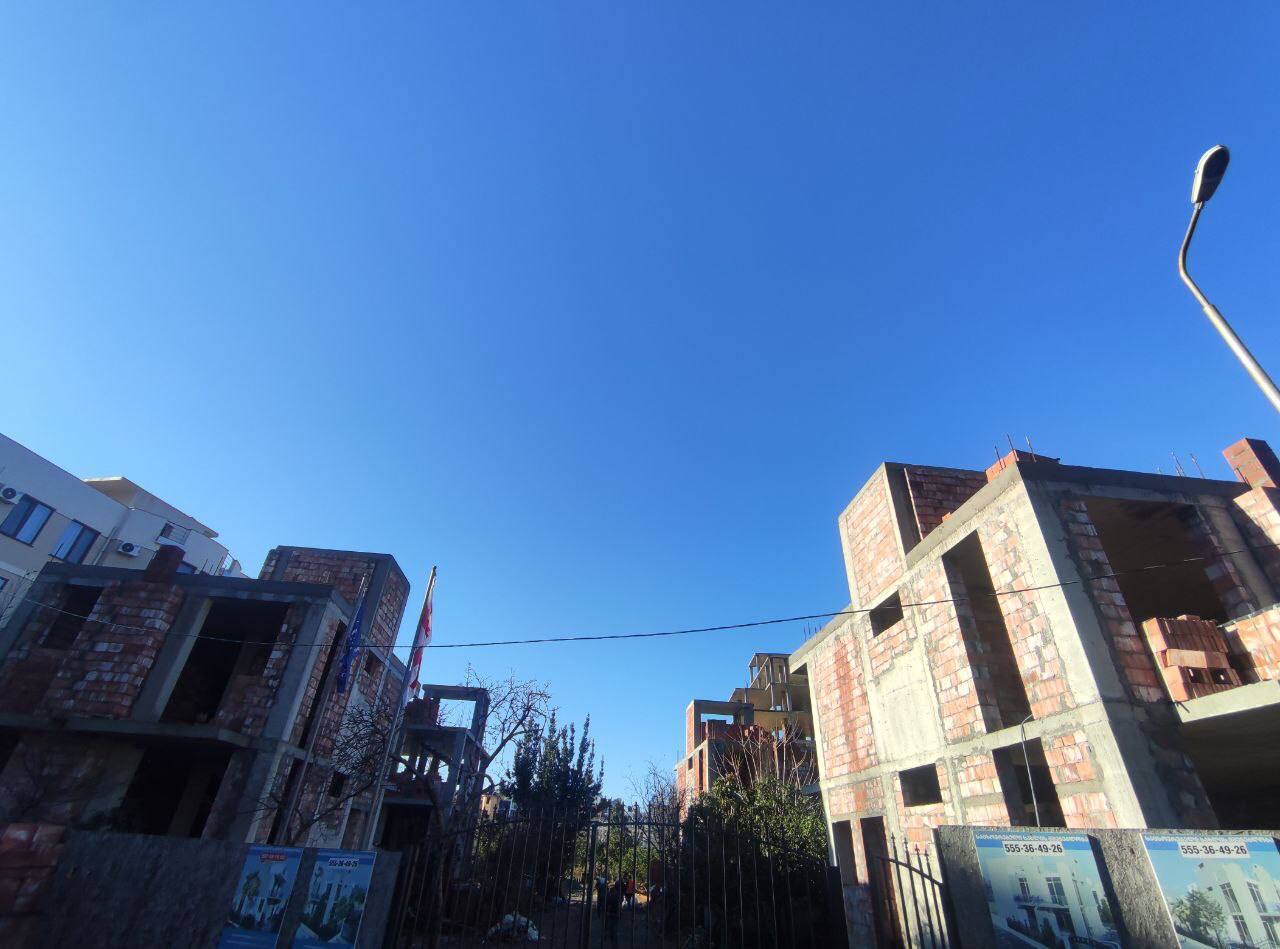 To prevent heat loss and ensure a high level of noise protection, all villas are equipped with Rehau metal-plastic windows (Germany) with double-glazed windows. The European quality profile copes with its functions much more efficiently than the cheaper Turkish counterpart widely used in Georgia. The developer of European Village does not save on finishing materials either; Persian marble, porcelain stoneware from Spain, natural wood, etc. are used inside.

When buying real estate by the sea, it is very important to understand its investment potential – the longer the life of the house, the more profitable the payback is. Therefore, houses that are built for 200 years are much more profitable than houses with an estimated service life of 30-50 years. The absence of the need for frequent major repairs is another strong argument in favour of more expensive and high-quality houses. And, of course, the most important component of the investment potential is the location of the property. Land by the sea is a limited resource that is constantly increasing in value. Thanks to this, the capitalization of such real estate is growing every year.

Such a comprehensive and professional approach to construction ensures the increased development of the Georgian real estate market. Increasing competitiveness makes it possible to stimulate the inflow of foreign investment into the country, leaving behind such popular resort real estate markets as Turkey, Bulgaria, Montenegro, etc., where, unfortunately, problems with the quality of construction exist.

The leaders of the Georgian market are shaping the vector along with other companies in the industry, striving to win in the growing competition. Therefore, today other companies are already gradually coming to an understanding of the need for heat and waterproofing of load-bearing structures, and some have begun to build from ceramic blocks, but so far only walls from a single block.

Experts say that now this process cannot yet be called massive and active. But the fact that some elements are already beginning to be used by individual construction companies can be viewed as an important positive moment, indicating the beginning of the Georgian developers’ entry into a new world level.