The Most Attractive Countries For The World’s Workers

Around The World, the desire to move between countries for work reasons is becoming less desirable. The Boston Consulting Group conducted a major survey of 366,000 people across 197 countries about labor trends and work preferences. 57 percent of those polled said they would move abroad for work, a decline on 2014’s 64 percent when the question was last asked. The developing world had the highest desire for a relocation abroad with 90 percent of India’s repondents and 70 percent of people in Brazil saying they would be willing to move to another country for the right job.

In 2014, the U.S. was named the most popular work destination worldwide and it remains in top-position this year. 34 percent of the survey’s respondents said they would be willing to move to the U.S. for work reasons. In Europe, the UK was the most popular destination for foreign workers in 2014 but due to Brexit, it has now slipped down the ranking to fifth place overall. The UK has been replaced by Germany which comes second in the ranking with 26 percent of foreign workers considering it their most attractive potential destination. Given its meteoric economic rise, China is conspicuous by its absence from the list and the only Asian entry is Japan in tenth place. 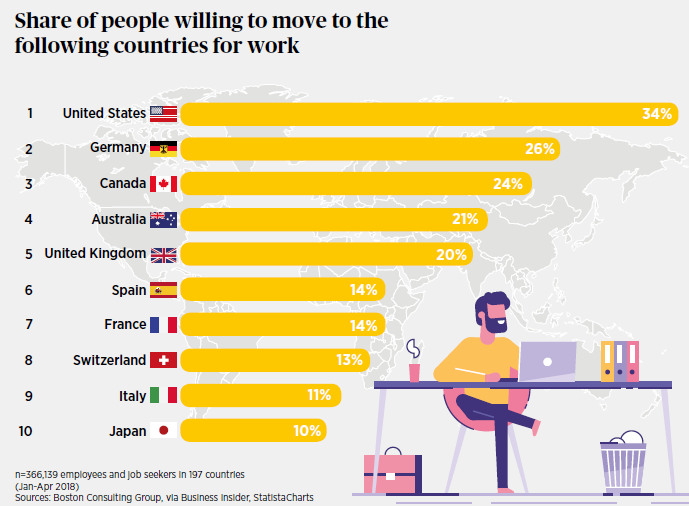 How Much do People Trust Banking Systems in Georgia

Is Georgia the Leading Country in Regards to the Number of Tourists Per Citizen?
23 ოქტომბერი, 2018