The World’s Most Valuable Soccer Teams 2019

It’s still raining money for the world’s most valuable soccer teams because they attract an incredible number of fans inside stadiums and in front of televisions, particularly for the Champions League.

Sponsors salivate, paying more and more money to attach themselves to these teams, knowing their players are global billboards whose likenesses are embedded in the hearts and minds of billions.

Real Madrid reportedly sold its sponsorship rights to Providence Equity recently for an upfront payment of $224 million over the first four years of the deal. Last season represented the start of Barcelona’s $246 million shirt sponsorship deal with Japanese e-commerce group Rakuten, as well the start of a ten-year kit agreement with Nike worth at least $174 million annually. At the end of 2018, Juventus announced a kit deal extension with Adidas worth $457 million over eight years.

Money is also increasing for media rights, especially for the Champions League. In 2017, Turner and Univision bought the U.S. rights for the Champions League in a three-year deal beginning with the 2018-2019 tournament for close to $100 million a year, nearly twice as much as Fox had been paying. The prize money pool for the 2018-2019 Champions League is a record-breaking $2.28 billion, 30% more than the previous year. The two finalists - Liverpool and Tottenham Hotspur - stand to earn between $104 million and $117 million.

Television payouts are also going up for domestic leagues and international packages. The Premier League’s domestic and international broadcast rights for the next three year cycle will be up a combined 8%, according to a recent report by Deloitte. Last year, ESPN reportedly agreed to pay $165 million over three years for a package that included Serie A and FA Cup rights. Streaming deals serve to bring in a few more bucks (Amazon) or expand the sport’s audience (Facebook).

Stadium naming rights could be the next money spigot for soccer. According to a recent study by Duff and Phelps, six teams in the English Premier League—Bournemouth, Arsenal, Brighton and Hove Albion, Huddersfield Town, Leicester City and Manchester City - inked a stadium naming rights deal last season worth a combined $57 million. Duff & Phelps believes the remaining 14 Premier League teams are leaving a combined $127 million a year on the table, with Manchester United topping the list at $35 million.

Bottom line: The 20 most valuable teams are worth an average of $1.75 billion, 3.4% more than last year. In euros (the base currency used for the valuations), the average team value is 1.56 billion, 8.8% more than the previous year. The average revenue and operating income (earnings before interest, taxes, depreciation and amortization) for the 20 most valuable teams during the 2017-2018 season were $499 million and $77 million, respectively.

After a two-year hiatus as soccer’s most valuable team, Real Madrid is back on top, worth $4.24 billion. Real Madrid reaped $100 million from winning its third consecutive Champions League in 2018 and is reportedly on the verge of signing the most lucrative kit deal in soccer history—$1.8 billion over 12 years with Adidas. 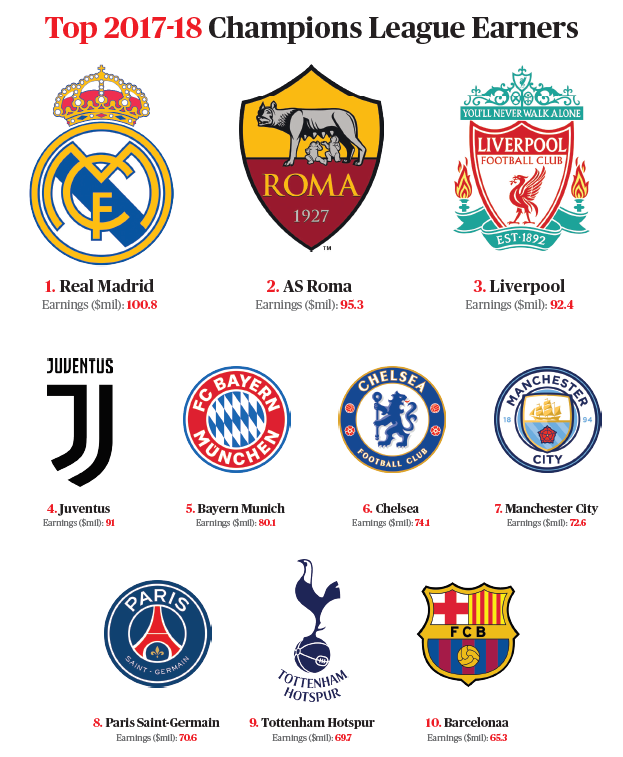