I don’t think you will become a doctor, as your parents want you to become. Try business instead,” states Tamar Gakharia, my interviewee, when I ask her about her career choices. It is what her grandfather used to say to her. Tamar listened to him, it turns out, as not so many years later, she found herself in business management – a sphere which was novel to the Georgia of those years. “It is a train that leaves now, so getting a seat today will pay well in the future,” thought Tamar when applying for the Business Administration program at the Caucasus University. She was right. Today, Tamar Gakharia is the Chief Financial Officer of CBS Group – an investment management company representing crucial Georgian assets, including Telasi and Tbilisi Energy.

Yet, Tamar is no ordinary CFO, either. She has led all the major deals that CBS Group has executed over the last few years, including the recent acquisition of VEON Georgia – one of the country’s leading telecom operators. So, this is where our conversation began, but it was not where it ended.

“We drive this car together.”

Tamar, you directly managed the acquisition of VEON Georgia, which coincided with the Russia-Ukrainian war. How was the transaction put together?

The VEON Georgia deal was no walk in the park. The negotiations did not begin during the war, nor because of the war, but rather three years ago. The war presented itself as an obstacle, as completing the deal required more time, resources and energy; securing the necessary funding also became troublesome. In addition, we did not want to finance sanctioned people, nor participate in a deal that would indirectly benefit them, so we had to consider newly formed compliance procedures. In the end, the deal was closed, and we acquired a 100% stake in the company. It was purely a business decision to buy out VEON Georgia. Yet, it is a great deal for our country, too.

Tamar, what other deals completed by CBS Group under your direct management could you highlight?

I do not think “direct management” describes the processes at CBS Group. For a transaction to happen, a team unites under a single goal. Therefore, I am a person capable of motivating not only my team members but also myself. CBS Group is like a car. Can you, for instance, determine which part of the car is more vital: The engine, transmission, or brakes? All are equally important as the driver cannot move forward without an engine, cannot speed up if the transition does not work, and cannot feel safe with faulty brakes. This analogy resembles the culture at CBS Group: All team members are essential as we drive this car together.

Driven by this motto, I am directly involved in all the processes CBS Group goes through, including M&A transactions, turnaround management, and operational activities of managed assets. Thus, differentiating between the numerous deals we closed or the successful cases we had over these years is a tough assignment. Each transaction has its success story worth telling. For example, the divestment of a brewery was my first decision at CBS Group. It was not a big deal, but its timing was perfect, and I was very young. Yet, the constant restructuring of our portfolio is no less exciting. Among other noteworthy deals, I would like to mention the two-phase sale of Caucasus Online, the sale of the shares of Europe-bet, and the acquisition of shares of Tbilisi Energy and Telasi. Investments in companies we built from the group or cases in which we initiated change management, as with the Georgian National Lottery or Marnaveli, are no less significant.

“Ideas won’t work unless you believe in them.”

What strategy do you employ when adding companies to your portfolio? What are the main factors that form your investment decisions?

Any investment incorporates risk, and no one can fully mitigate it. What I like about our shareholder is that his decisions are not affected by the probabilities of success or failure. He believes in the idea he is implementing and is confident in his ability to overcome loss, whether his initiative is emotional, philanthropic, or rational. It is his enterprising spirit that shapes our work environment. When it is up to me, however, it all begins with calculations. Several factors are crucial: Market timing, growth outlook, a synergistic effect between portfolio companies, and risk diversification. One of my favourite matrices for skimming decisions is the CANSLIM rule, maybe because the word SLIM is associated with something desirable – getting slim [laughs]. I have adapted this rule to the Georgian reality.

Telmico, Telasi and Tbilisi Energy represent an important part of CBS Group’s portfolio. Why are you attracted to natural monopolies?

Let me define the terms natural monopoly and exclusive license. A monopoly is where a particular industry has high infrastructural costs and barriers to entry to allow a company, often the first supplier in a market, to have a monopolistic position. Exclusive licenses, however, are granted to the private sector for developing or maintaining critical industries, which, relative to the market size, would not exist or generate profits in highly competitive markets.

In a turbulent economy like ours, balancing the portfolio with companies relying on stable demand for their products and services is crucial. However, there is a trade-off. We have lower risk exposure but bear capped profitability and growth potential. High risk means high return, but often it is better to give up high profits and hold stable margins. This enables you to compose a balanced portfolio or get a synergistic effect from such businesses. Instead, one is responsible for transparency and compliance with demanding regulations.

Tamar, seeing a young woman such as yourself taking up an executive role at such a large company is rare not only for Georgia but also for more socially developed countries. So what does it mean to be the CFO of CBS Group?

A woman always and everywhere adds additional value. During my MBA, I read an article in which the author argued that women take up only 20%-25% of executive positions and 29%-33% of high-level management positions available globally. This phenomenon comes down to a simple fact: Apart from a regular full-time job, women must work as mothers, housekeepers, cooks, and more. Taking care of everything is already hard, yet it gets trickier during transitions in life, such as marriage, pregnancy, and motherhood. Here comes the moment when we may decide it is easier to quit working. There are many reasons: No clarity of thought, the uncertainty of one’s abilities, social pressure, or a lack of willpower. Being honest with oneself is imperative; if one’s dream is self-realization, one should never abandon it. It is easier to run the marathon of life if you love what you do.

Becoming the Chief Financial Officer was a turning point as my responsibilities grew enormously. I had a child, and my personal life was turbulent. I was the only breadwinner, which empowered me to accept this challenge. I feel fortunate to work in this great organization under male superiors with no bias against women. As a result, I have never faced the idea of giving up. This support is particularly crucial when you work inordinate hours and have children who require nourishment, care, and time. 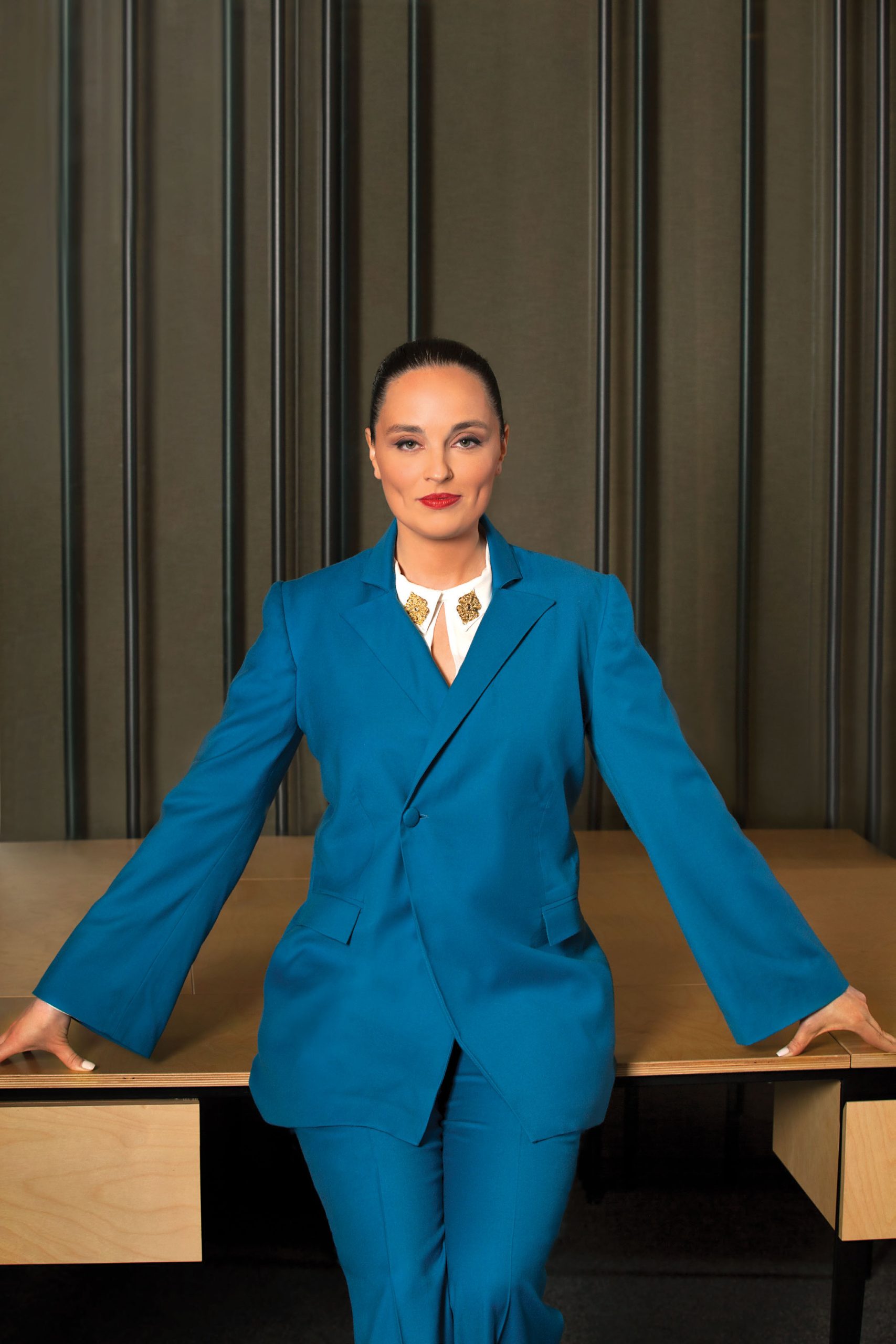 CBS Group is not just a job for me but rather something more. It allowed me to get to know people, gain experience and taught me how to live. I have two children, and to have this knowledge is priceless, as I can pass it on to them. They can leverage me being a working mother; I never feel guilty about it. I am enthusiastic about what I do and grateful to my family and kids for teaching me how to lead with empathy. The key to success on the job or at home lies in humility, humanity, and love.

“There is no substitute for hard work.”

What did you do before joining CBS Group?

Before joining CBS Group, I worked at one of the leading Georgian banks, where I moved between positions. Entry-level jobs rapidly transformed into occupations that many consider successful for a person my age. Working in a bank gave me broad experience, as banks are the dynamos of development in our country, and when you work there, you are on that train. There I learned one of the most important lessons of my life – there is no substitute for hard work. I proved myself every day, but it was worth it, as, in the end, CBS Group noticed and recruited me. I have never been afraid of leaving my comfort zone as this is the only way to upgrade and develop into a better version of myself.

“The story of one Khachapuri”

You studied business management both at a bachelor’s and master’s level, the latter at the Grenoble School of Management. When and why did you decide you wanted to connect your life to this field?

Ever since I was little, I have enjoyed writing and numbers. Whenever I look at financial statements, numbers tell me a story. Age, for instance, was never a mere number for me, as I always presented it as a unit of experience. That is the same in business. You create something that is ultimately a number, representing the return on the work you put in.

Let me tell you a story about how I grasped the principle of supply and demand. It was at my grandparents’ summer house, where I used to spend a lot of time when I was growing up. Whenever I wanted to eat khachapuri, my grandma had nothing but flour, while some of my neighbors had cheese, and others had eggs. It was the 90s. I would go on a journey to fish for some trout in Lugela Canyon with my grandpa to solve this imbalance. We would return with fish, which I would use as a commodity to barter with our neighbors for eggs and cheese. With all the ingredients, my grandma made delicious khachapuri, which we all enjoyed. It is like sharing shareholder value and capitalizing on investment, right?

That little girl, climbing those beautiful gorges, standing in crystal clear, icy water, with a mission in mind and a long spinnerbait in her hands. This memory gave me a feeling of accomplishment that has helped me many years later in my career choices.

Tamar, what you are referring to reminds me of a term – or rather a phrase – you used during your other interview: Georgian Intellectual Capital. What does this mean to you? What does it represent for CBS Group?

Given that Georgia is a small country, there are natural limits to what it can produce. Yet, our country has enormous intellectual potential. It could transform our country into a regional intellectual hub. I dream that our fellow citizens will one day forget about leaving Georgia to invest their knowledge abroad. Why should there be a brain drain? On the contrary, I want Georgia to attract more intelligent people, especially when the global markets have shifted towards intellect driven jobs. Any deal, at its core, is an investment in the intellect of the people involved in the business.

This is where CBS Group sees its responsibility. We always try to employ local consultants for the deals we take; deep knowledge exists here too. So there is potential, which we can nourish. If Georgian investment companies follow suit, the global demand for Georgian intellectual services will increase. We, as a nation, will then be able to export our intellectual capital rather than drain it. That is where the key to unlocking Georgian intellectual potential lies.

Singular Marks One Year as Being Part of the Flutter