About 1 billion people continue to smoke and the World Health Organization (WHO) estimates that the number of smokers will remain high for the foreseeable future.

It would only be logical to think that science and technology can and must play a role in devising solutions to this problem.

However, as in many cases in history when innovation was viewed suspiciously by the governments and other interest groups innovation in tobacco harm-reduction is no exception.

More so, it seems scepticism in this direction to be even a tougher challenge to overcome since the discussion on scientific approaches to smoke-free alternatives are either directly restricted by the authorities or ideologically driven, stemming from the negative attitudes persisting against the tobacco industry in general.

We could probably argue that the burden of neglecting scientific findings in achieving a future that could potentially be called a smoke-free, less harmful future is heavier on LMICs where according to the global statistics the smoking prevalence is higher.

Forbes Georgia via its Forbes Health platform is interested in opening up the discussion on the issue. As its Executive Editor, I got the chance to travel to Switzerland to PMI’s R&D centre to talk directly to the key industry player about what they perceive as the main challenges and possible opportunities on the path of achieving a smoke-free, less harmful future 10 to 15 years from now, mainly for those who despite all odds still do not decide to quit smoking.

This interview with Tommaso Di Giovanni, VP of International Communications at PMI is the first step for the Forbes Health platform to open up the informed discussion series on tobacco harm-reduction.

Since joining Philip Morris International (PMI) in 2001, Tommaso Di Giovanni has worked in various capacities within the company with a focus on business development, regulatory affairs, and communications in France, Switzerland, and Latin America (based in NYC), Brazil and Italy.

In his current role, Tommaso is responsible for supporting PMI’s affiliates worldwide in their efforts of sharing the company’s vision for a smoke-free future with the media and other stakeholders. 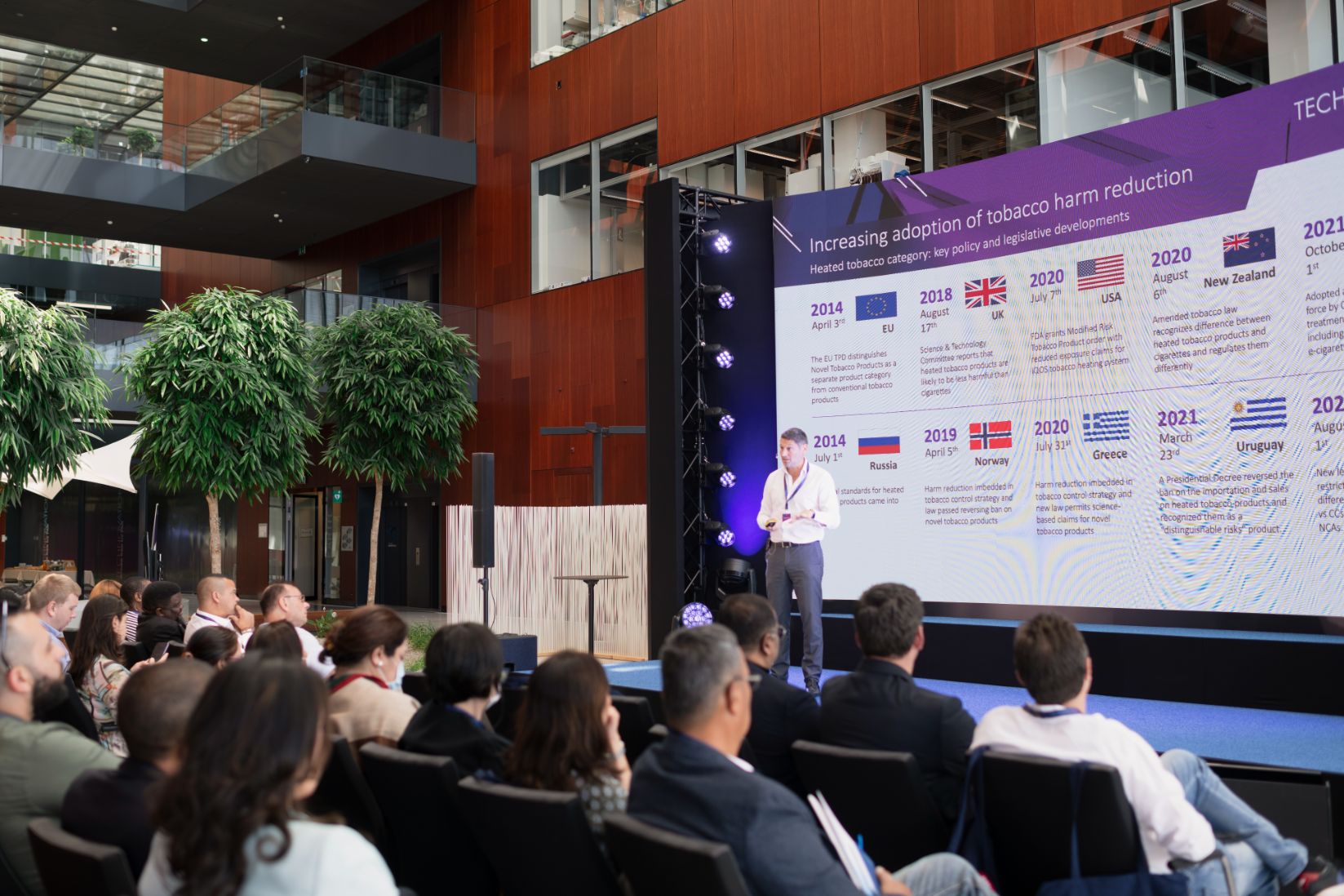 Forbes Georgia sat down with Tommaso for the first interview in the Forbes Health series on tobacco harm-reduction.

WHO praises Georgia for having the strongest tobacco regulation framework in Europe; however, the number of smokers has been decreasing at a relatively slow pace in Georgia over the up to four years that the new legislation has been enacted. How could Georgia accelerate this pace? Forbes Georgia is interested in what the industry has to say on this.

It is interesting that you have mentioned this – no matter how much input we put into traditional tobacco control measures, even the WHO says that by 2025 there’s going to be globally more or less the same number of smokers as what we have today and Georgia is no different. The impact that these measures have today is not the same as what they used to have in the past. It’s time in my view to think about complementary approaches to make sure that we accelerate the end of cigarettes.  And these involve leveraging science, technology and innovation.

My question is about how – are there any best practice regulatory practices that Georgia could follow?

Some countries like the US, the UK and more recently New Zealand have shown the way. Take New Zealand. The country has enacted a framework where cigarettes are a subject of much stricter regulation introducing restrictions on communications, for example. On the other hand of the spectrum, products like e-cigarettes and heated tobacco products are subject to differentiated legislation that for example allows some sort of communication about their benefits and risks to consumers. In addition, the government is actually implementing proactive information campaigns to encourage switching, and health warnings are different than for cigarettes. By differentiating significantly between the two and communicating differently, New Zealand wants to go smoke-free and get rid of cigarettes by 2035.

Are there lessons for Georgia in this?

I think countries like Georgia should look at these types of examples because the differentiated regulation and support from civil society can go a long way in getting rid of cigarettes. Every country has a different reality and different markets but the basic principles of differentiating regulation to encourage those who do not quit to switch to less harmful alternatives works for all countries.

Two things here: One being ideologically motivated resistance to smoke-free alternatives and yes, we have seen such interest groups in Georgia as well that stick to the quit or die approach; and the second being industry involvement in driving the change itself because of the new Povvado survey findings have been out and we see that the vast majority of respondents actually wait for the industry to put at least some solutions on the table. What’s even more interesting in this regard is the fact that the respondents include both – smokers and non-smokers … How could the readiness of the population to embrace innovation, on the one hand, be linked with the value of tobacco harm-reduction on the other for driving the more bottom-up process and demand for smoke-free solutions?

As a company, we communicate as much as we can the information about these new products making sure that we use all responsible venues to tell smokers that products that do not combust are better alternatives to cigarettes. And I agree with you, the more smokers switch the more there will be momentum for change. The other thing the companies should do is they should not wait for governments to take action, they should probably do what we did – pioneer the change. Unfortunately, there is a moment when the limitations imposed on the tobacco industry by regulation are such that communicating with consumers becomes a difficult task. Today in many countries and if I understand correctly, Georgia is no different, we simply can’t tell smokers what are the benefits and risks of these new products. It is very difficult for smokers to understand the difference and switch. Why would you switch to something that has electronics, is more complicated, doesn’t give the same taste and has an initial cost because of electronics, if you are not told that product is a better choice?

What do you see as the main consequence of such a lack of communication with smokers?

Of course, the consequence of that unfortunately is that smokers continue to smoke cigarettes when instead today they can switch to something that has 95% lower levels of harmful compounds.

Sceptics say the data and numbers existing today do not provide enough epidemiological evidence to claim that these new products are less harmful to our health since they have been on the market for a relatively short period of time and that’s not enough to give scientific answers to all the questions – what do you have to say to that argument?

I am going to quote a public health expert who is totally independent and who was asked that question at the conference in Warsaw a few months ago. He asked the question back and he said: tell me one thing – do you know of any epidemiology that tells you that if you jump from a plane without a parachute you are likely going to die? The answer of course was, no. And then he said: wouldn’t you think logically that there is a high chance of death happening? And the person had to say yes. That’s exactly the same answer. We have enough evidence today to know that those products are much better alternatives than cigarettes. We have laboratory studies and clinical studies. We have a beginning of the epidemiology with the studies from Japan and Korea that head in the right direction. Every day we wait is the day when somebody continues to use cigarettes to the detriment to their health. Why waiting?

Don’t get me wrong. Epidemiology is important and will tell us more precisely the extent of the harm reduction in the population. I’m not challenging that. But in the meantime, we have enough evidence to tell consumers that products that do not burn tobacco, when subject to quality controls and regulatory oversights, are much better options for them. It’s very clear. And it would be irresponsible not to say it.

Do we have empirical examples here?

There is actually one case where you even have the decades of epidemiology – that’s Sweden. In Sweden, historically, the male population primarily used alternatives to cigarettes called Snus, and the female population primarily used cigarettes. When you look at the decades of epidemiology and the rate of smoking-related diseases, those diseases are much lower among men than among women in Sweden. More so, they are much lower among men in Sweden than in men on the European continent, where this product for some reason is prohibited. This is a concrete case of harm reduction proven by epidemiology. It proves that the concept works.

Well, today you have a very strong argument backing what you just said and that is an FDA decision. Why isn’t that sufficient to set a global precedent, especially for those countries with stricter regulations to open up the ideologically-free discussion on alternatives?

Look, some countries are looking at the FDA as an example and drawing inspiration for their decisions from it. And there is momentum behind change. I mentioned New Zealand, but Greece changed its legislation recently, Portugal has a differentiated regulation, Italy has a differentiated regulation and the UK has very innovative legislation, focused on e-cigarettes. Unfortunately, some others are entrenched in old positions that are against change and tend to amount to a prohibition. Slowly that’s changing. We see the growing number of countries embracing the change but change comes slowly and scepticism is difficult to eradicate. In the end, rationality always prevails though.

Martin Lindstrom: Georgia Has the Potential to Create a Very Strong National Brand