Skip to content
Home
All News
The Role and Influence of Wine Export on the Economic Growth of Georgia
The estimated reading time is 6 minutes
Nikoloz Jmukhadze
August 1, 2022 at 11:59 am

The history of Georgian wine, starting from the forms of wild vines to the perspective grape varieties, dates back centuries; that’s why our country is called the “cradle of wine”. It is known that a traditional Qvevri wine-making method in Georgia is the UNESCO Intangible Cultural Heritage Monument. The facts and history show that the country has the potential to turn the wine sector into one of the main motive forces of economics on the basis of export.

In conditions of the global economy, trade is more complicated; in general, the market, and the wine market in particular is quite saturated. The role of Georgia in the international arena has been growing for the last decade. Recent changes in the wine sector have had a positive impact on gaining a certain place in international markets. It should also be noted that today’s share of the export market still belongs to Russia, which means that there are still certain problems of diversification in the wine sector and the increase in the share of Russia in the total export leads to the encouragement of low-segment wine production. Nowadays, the average price of exported wine is 2.30 US dollars, the main determining factor is the large share of the neighboring country in the exported wine; in fact, it might be said that it itself dictates the selling price of the Georgian wine market.

It is clear that wine exports are increasing year by year, which has a positive effect on the trade balance of the country. Therefore, the question has arisen – what is the role of wine export and the current situation in the export market in the economic development of our country?!

The wine sector has a significant impact on the economic development of Georgia. The share of its export in total export is quite considerable and occupies an average of 5.7% from 2015 to 2021. Based on the same data, wine is the fourth export product in the total export of Georgia. The share of wine export in the Gross Domestic Product (GDP) is important, it should be noted that over the years, it has been growing along with the growth of GDP. 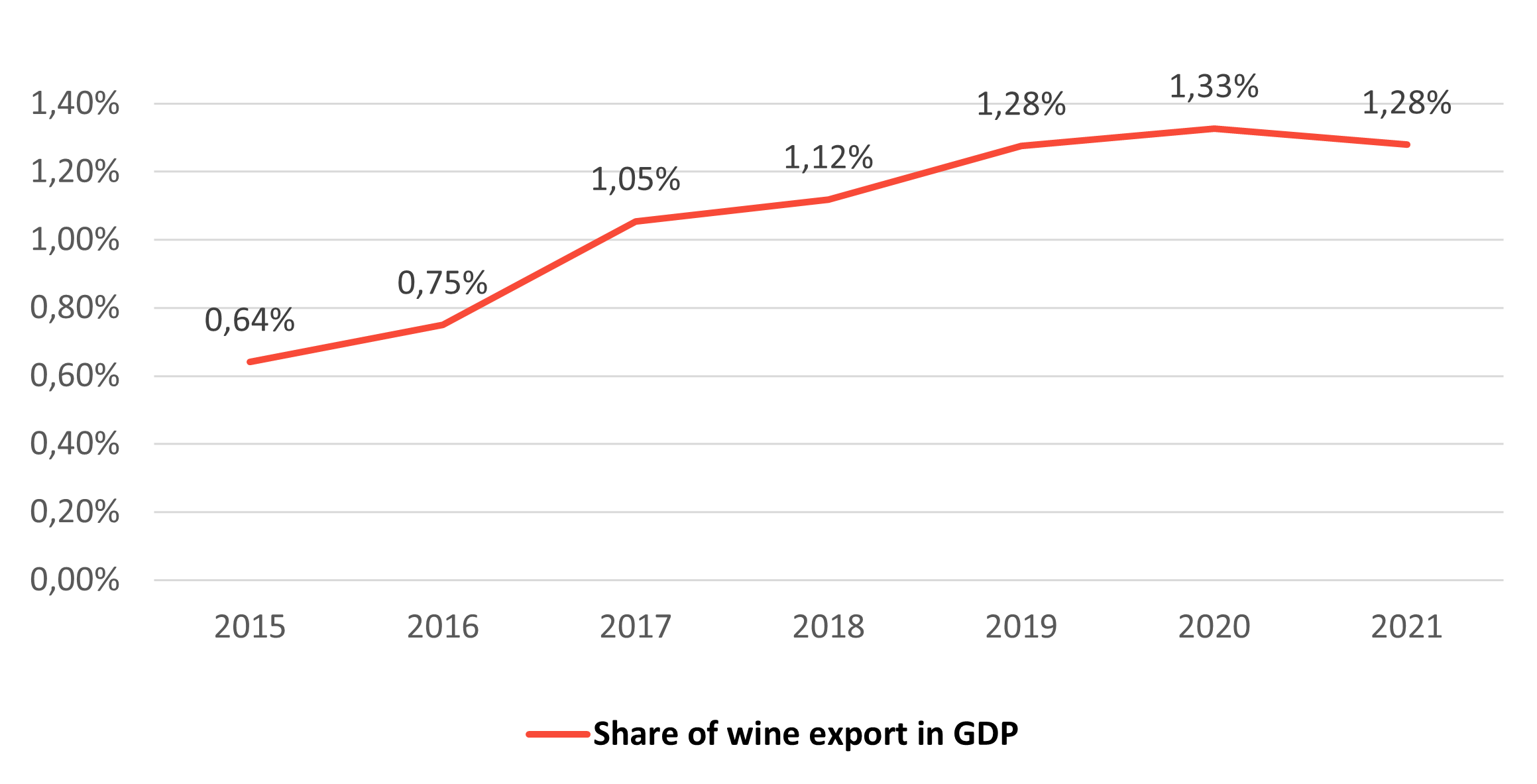 The data shows that currently, the share of wine export in GDP equals 1.28% on average. According to the data of 2015, it was 0.64%. Therefore, it is obvious that the significant share of exports in GDP has increased over the last 7 years.

Data analysis shows that the strongest positive correlation between wine exports and real GDP growth begins in 2018 and is 0.93. The above data once again emphasize the important role of the wine industry in the economic growth of the country.

The existing potential and significant influence of the wine sector in the Georgian economy is certainly noticeable. However, it is necessary to strengthen this potential, which will once again allow the increase in the share of wine export in the total export and thus increase the rate of economic growth, although it is important to solve the problems in the sector as soon as possible.

It should be noted that the Georgian wine sector is facing such a challenge as the diversification of the export market, the lack of marketing activities, and the lack of professional staff. All of these are the determining factors for promoting the growth of competitiveness. The main challenge of the sector is the absence of a unified strategy, there are challenges in farms that produce grapes in Georgia. The main problem in this field is the small scale of the farms, which is entailed by the fragmentation of the land, as they are not able to get a competitive price for the cost incurred per unit kg of products based on the principle of economy of scale. Due to this and other similar challenges, the state has to subsidize grapes every year. It is important to know what effect grape subsidies have on wine exports and whether the subsidy has any consequences for the industry?! 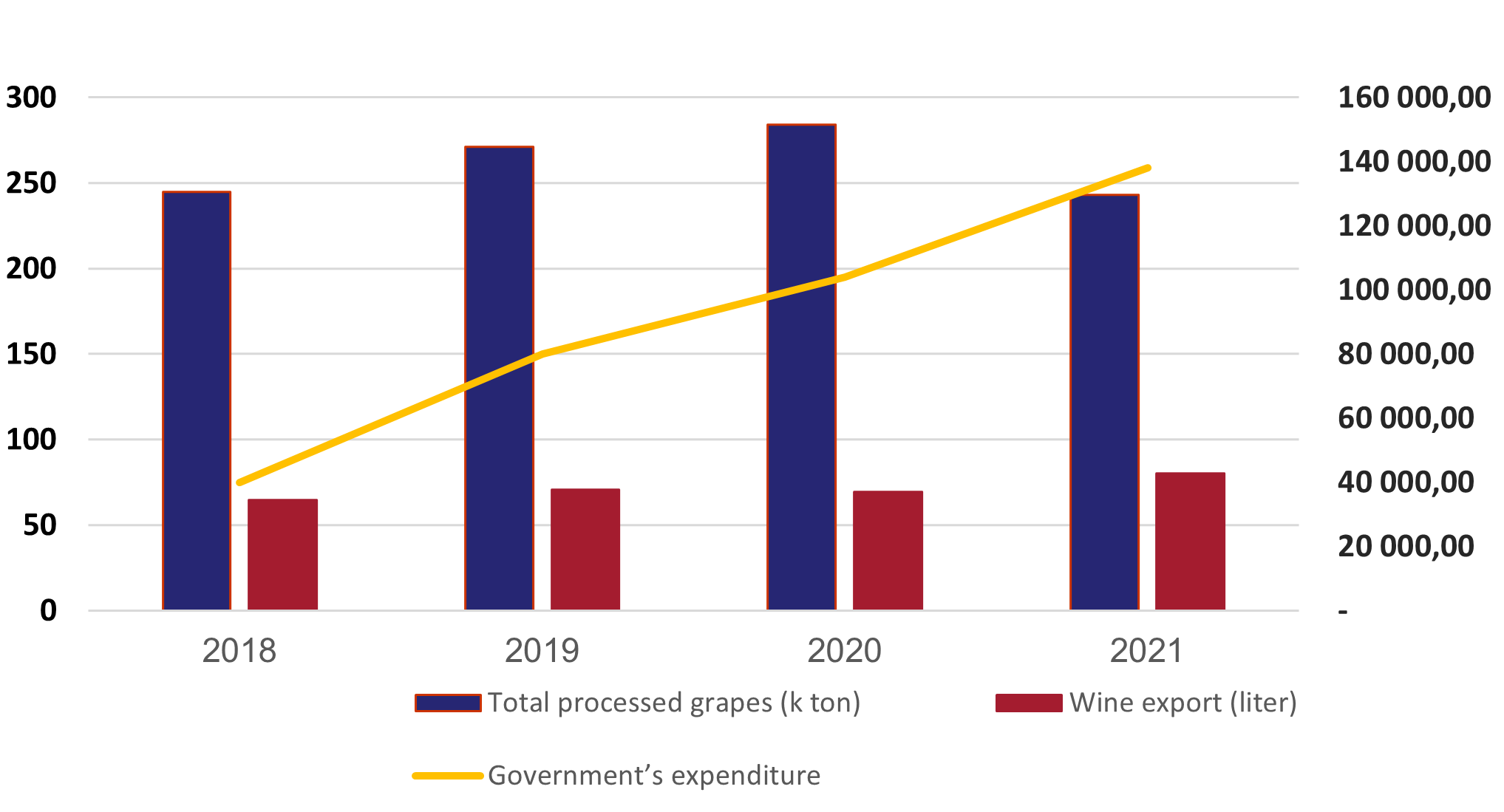 Based on the data, it can be said that in the background of regional challenges, it is time the state gradually abolishes subsidies. The main objective of the subsidy was to promote the growth of exports; based on the fact that exports have an increasing trend, we can say that the objective has been achieved and now it is time to develop other mechanisms. Continuation of the mentioned program already leads to excess production of raw materials (grapes), as well as demotivation of farmers to produce quality grapes. They are not motivated to express interest and try producing other crops because the subsidy program has created the wrong incentives in agriculture. It should also be noted that the majority of medium and small farmers are actually no longer engaged in other labor activities due to dependence on viticulture subsidies, which is one of the reasons for the problem of finding staff and employment in the regions. Today, these negative factors entail increasing the adverse influence in the field of wine-making and viticulture. One of the main arguments for withdrawing from the indirect subsidy is also competition between the state wine companies and the private sector because the wine produced by the state and then auctioned is often sold for less than the cost price. According to the market economic principles, the mentioned issue is also an obstacle to the economic development of the country.

It will be time to gradually change the direction and strategy of subsidy costs, it is possible to subsidize trade marketing costs in foreign markets, which will help manufacturers to enter international networks. To some extent, they charge quite high trade commission fees to place their products on their merchant sites. Through a properly organized program, such involvement will become an important incentive for entrepreneurs working in the sector since a large part of the financial costs of companies are spent on supply and marketing costs, in which trade marketing costs are also taken into account. It will be an important factor for producers if they receive some support from the state in terms of the costs of entering international markets and trade networks. This will contribute to their activation in the European markets and other strategic countries. Accordingly, the average price of exported wine and the level of diversification of export markets will be given the opportunity to grow. To some extent, it will be possible to increase the profitability of the companies, which will allow them to expand their production, and the latter can be expressed in the purchase of more quantities of raw materials (grapes).

External factors may affect export dynamics to some extent, so manufacturers should focus on diversifying both foreign and domestic markets. In the diversification of the domestic market, it is possible to consider wine tourism because the interest of tourists flows in wine tourism is growing. In addition to participating in exhibitions, it is necessary to develop a unified strategic vision and the branding of Georgian wine for international target markets. It is important for the foreign consumer to know Georgian wine by its character, quality and price segment. For this, it is necessary to use the 8000-year-old history and establish the right form of communication, which will introduce Georgian wine as a brand and remain in the memory of its international consumers. It is also important to note that the average export price is quite low ($2.30) for such a historical and traditional wine-producing country as Georgia, which may cause wrong perceptions of Georgian wine in international markets. For this, it is important to focus on countries where the average export price of Georgian wine is higher. Accordingly, in similar countries, more attention is paid to quality. It is possible to consider the USA, Great Britain, Japan, and Germany in this regard. If both the state and the private sector focus on the mentioned countries, the latter will, in a certain period, affect the increase in the quantity and value of exports, will also lead to an increase in the average exported price, and what is most important, will motivate wine producers to produce high-quality wine. Finally, the country will get a diversified export market, quality products, a well-deserved image in international markets and, most importantly, growing economic indicators.

Forbes Exclusive: The Island of Artemis – A Metaverse World Where You Can Be Your True Self

Regulation and Innovation in the Gambling Industry – Diametric Opposites or Symbiotic Partners?

What is Behind Recent Tensions Between Azerbaijan and Armenia?