The path from Kazan to London, from the system administrator of a dental clinic to one of the leaders in the telecom market. It’s a real success story of ‘local boy done good’ that began not in Silicon Valley but Kazan, the capital of Tatarstan in Russia.

Andrey Insarov, an engineer from Kazan, built Intis Telecom from scratch and in 14 years has grown the company into a global concern. Headquartered in London (UK), it has annual revenues running into the millions and last autumn, Intis Telecom made the largest acquisition in the domain name market during 2021 with its purchase of the ultra-premium domain IT.COM for $3.8 million.

Using the domain zone created by Intis Telecom on the back of it.com, users from all over the world will be able to create websites with convenient, short names. Trade-in premium .com domains on popular sites have long gone beyond what most would deem logical and has often morphed into speculation. Intis Telecom is approaching it completely differently.

Intis will provide a real alternative by not allowing reselling on .it.com. Thousands of people will be able to buy domains they want at a fair price from a global company, all without having to haggle resellers.

According to experts, the most popular .com domain zone has almost run out of capacity. There you’re left with having to compose names for new sites from a few words or buying shorter ones for a lot of money from cybersquatters. A short and understandable website address is easy to type into a search engine and proves more effective in driving traffic when appearing in advertising. In popular zones, such domain names have long been occupied by those who do not host sites on them, but simply sit tight speculating…

Intis Telecom is already helping customers deal with the age-old problem of long domain names with its Cli.co link shortening service integrated within SMS notifications. Now Intis Telecom will address the issue with the help of .it.com. This is a step forwards globally, making convenient domain names available around the world for all. After all, shortening links within advertising only neutralizes the consequences of the long domain problem, without eliminating its cause – the shortage. A service based on .it.com can bring Intis Telecom to a fundamentally new level of income, turning it into one of the British ‘unicorns’ – companies with a capitalization of over $1 billion.

Andrey Insarov has shown that any skilled person (even from the relative outback!) has a chance to create an international company. Andrey was born in Saratov, graduated from Kazan Technical University (KAI) and started his own business in 2008 in the capital of Tatarstan with the development, sale and maintenance of software for dental clinics. That business brought in 20-30 thousand rubles of net income per month, so he generated extra income by designing, installing and maintaining local networks and equipment.

The SMS notification service was launched as a spin-off product a year after the firm was founded but soon became the core business. Within 5 years, Intis Telecom increased its turnover 1000 times. In 2019, the revenue of the Russian business of Intis Telecom exceeded 105 million rubles, with total earnings across the group exceeding 3 million euros. Now the company operates in more than 180 countries, opened offices in Hong Kong, London and New York, as well as representative offices in Israel, Germany, Kazakhstan and Uzbekistan. New offices and representative offices will be opened as the company moves more into local markets.

Recruitment – the Key to Success

The secret of Andrey Insarov’s success, as he freely admits, is his investment in people. The businessman hires talented programmers who work hard to stay ahead of the curve, ensuring the growth of Intis Telecom. With customers, too, painstaking work is carried out to ensure they remain loyal and churn is minimized. Insarov has a talent for selecting great personnel by really hearing them and not just listening to them.

Not every novice businessperson building a company from scratch, up to their neck with things on their to-do list, is ready to personally interview potential customers to explore the viability of a new market niche. 13 years ago, Insarov was not too lazy to go to the shopping centre himself and personally interview shop assistants about advertising via SMS. At that time, many did not understand what it was about at all, but in the end, it was this product, which at first was a side product, that determined the future of Intis Telecom.

In 2009, the niche of SMS notifications had few competitors and was relatively free of state regulation – great conditions for growing the business. Large companies sent advertising messages over mobile networks, but small and medium-sized businesses practically did not use this tool. They were simply not aware of how powerful it could be to their business, but hard work changed this. The SMS notification services Intis Telecom offered showed explosive growth in 2010.

Large mobile operators in this sector could not compete based on the quality of service with the smaller, specialized companies which ended up gaining the majority of customers. Working in the SMS notification sector at that time, it was not necessary to have to negotiate with mobile operators or obey the regulator to get business moving. This great freedom led to an explosion in the number of market players but then also a bust; after the introduction of state regulation and the fight against spam, less than a third of those who used to earn money from sending advertising SMS continued to provide this service.

Intis Telecom bucked the trend: it not only remained in this (then) niche but also continued to grow its business. Anticipating the saturation of the market, Andrey Insarov understood the importance of Intis having its software and solution to power the SMS business and attracted strong talent to do build exactly that. Having its software and development team allowed the company to quickly adapt to customer and market requirements, offering additional features which increased customer loyalty and business sustainability. Customers are highly likely to remain loyal to any business if they receive friendly personalized service and timely support, all at a reasonable price.

Intis Telecom has focused from the beginning on the SME enterprise sector – small and medium-sized businesses. Intis has a large number of smaller clients makes the company more stable, if more difficult to run! Operationally, it would be easier for an SMS aggregator to have just several large customers. However, Intis Telecom has pro-actively worked with smaller firms, signing even modest contracts, which has allowed the company to succeed during even difficult times where spam was prevalent. In 2013, mobile operators’ pricing for commercial SMS increased by several dozen times due to changes in the federal law “On Communications”. The legal framework has been amended to limit intrusive advertising.

In the fight against spam, customers with a small volume of advertising messages tolerated the increase in the cost of messages more easily. After all, a small company needs only to send a limited number of commercial SMS. Even if they cost significantly more, it won’t hit the budget too hard. Customers understood the situation and thanks to the great service and support Intis continued to offer, remained loyal, allowing the company to survive during even these most difficult times. 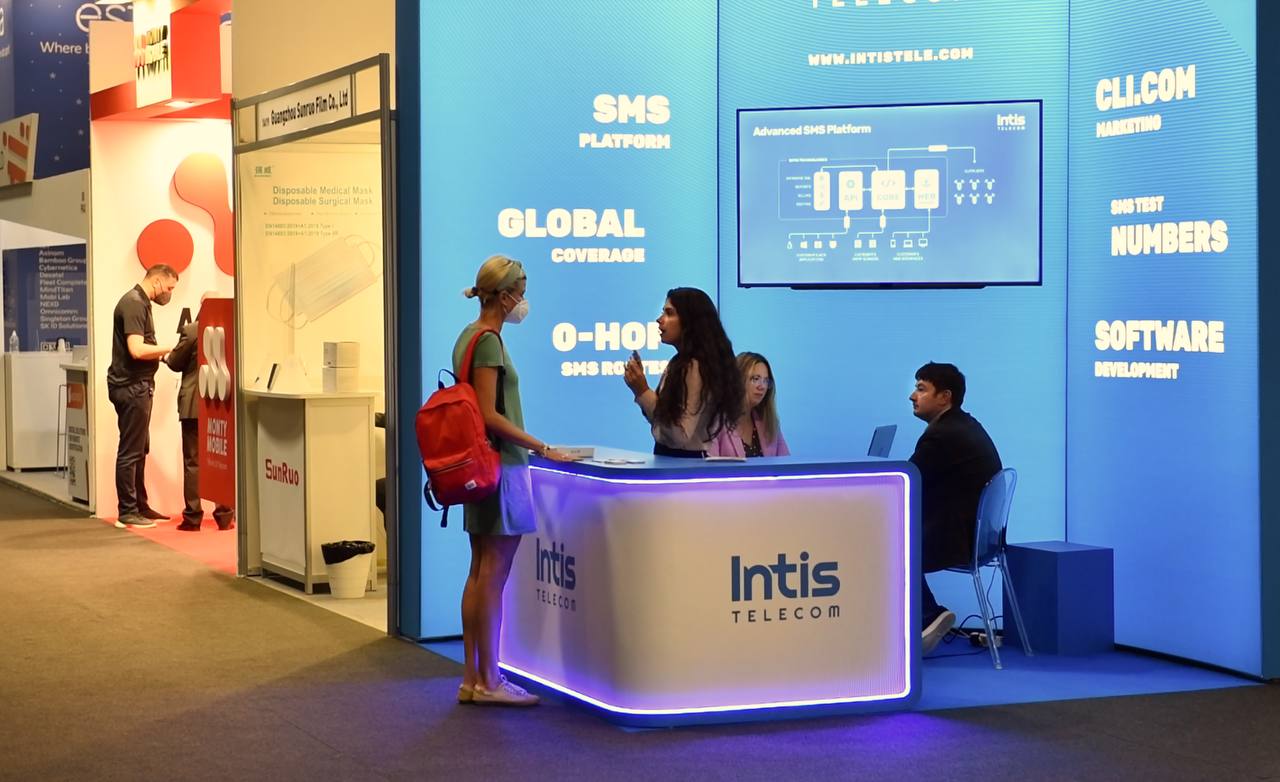 In 2013, Intis Telecom entered the international market. But settlements with foreign customers and partners through Russian banks proved way too slow. At first, Intis Telecom had to work with European companies on credit due to problems with credit institutions, but this did not stop Insarov. Later, Intis Telecom opened its first foreign representative office in Lithuania.

Ten years ago, it was convenient for IT companies to do business from the Baltics and pay from local bank accounts, providing a noticeable growth in the information technology industry in the region. Observing this activity, the European regulator increased the number of checks it did on Baltic financial institutions. Then they began to close the accounts of companies with Russian roots. The decision, therefore, was made for Intis Telecom, and it was forced to relocate.

Andrey Insarov moved to the UK, choosing again a difficult but promising direction for business development. Registering a company in the UK is easy – you can do it online – but doing business is more difficult. You have to hire a local director and open an account with a UK bank which is not easy. They ask so many questions, carefully check each new client and generate a pile of documentation along the way you need to complete!

However, those who can pass the checks and join the business environment have the opportunity to receive investments from local funds and consulting support from business incubators. Having founded a startup in the UK, a foreigner receives a residency permit under the state program, and after 6 years of work, citizenship. A well-established legal base, a strict taxation framework, the prestige of the country and a state system that has practically remained unchanged in 400 years, help business, all things Andrey Insarov was convinced of. In addition, during the pandemic, Intis Telecom received support from the British government in the form of a soft loan to mitigate the negative effects of the COVID-19 pandemic.

Planning for the future, identifying market demands and the quite often difficult but effective solutions have become the key to Intis Telecom’s dizzying growth. Going further, interviewing consumers, researching the market in detail, developing far more than just standard solutions, not being afraid to work on debt and all for the future, such a strategy has paid off.

An example is the Cli.co link shortening service which can conduct in-depth marketing analysis based on SMS mailings. In 2019, before creating this product, Intis Telecom studied the needs of marketing agencies and sales departments of organizations using promotional SMS.

At that time, competitors did not offer systems for in-depth research into the results of SMS mailings. The employees of marketing departments polled by Intis Telecom lacked high-quality statistics of clicks on links from advertising messages. To work effectively, they needed instant evaluation of multiple transition parameters at their fingertips, as well as the ability to set analysis criteria at will.

Intis Telecom’s research also revealed that customers were interested in how to go about connecting a good number of domain names.

The solution to this issue was provided by Intis Telecom with its release of Cli.co. The next step was to help clients create shorter and more convenient domain names. The .it.com domain zone was made to do exactly this. In May 2021 IT.COM premium domain had been acquired by Intis Telecom and on the 1st of November 2021, the company has become an exclusive official registrar of domain names within a freshly created .it.com zone. Andrey Insarov believes “This new zone is expected to become an affordable alternative to regular .com domains that are in short supply.”

No doubt all this should provide fresh impetus to the development of Intis Telecom, which is used to researching demand, preparing carefully, working hard for the future and taking big steps towards success!