Skip to content
Home
All News
Such Great Heights: Where Are the World’s Tallest Buildings?
The estimated reading time is 3 minutes
Forbes.ge
April 25, 2021 at 4:02 pm

It seems that humanity is always vying to exceed our past accomplishments, and nowhere is the evidence clearer than in the tallest buildings that make up our cities.

We’ve previously looked at how the architectural feats of humanity have simply grown in magnitude over time, tracing this progress as far back as the Stone Age.

The question now is, how much higher and further into the skies can we reach? This infographic by Alan’s Factory Outlet looks at the glittering urban skyscrapers on every continent. We also examine some interesting facts about each region. 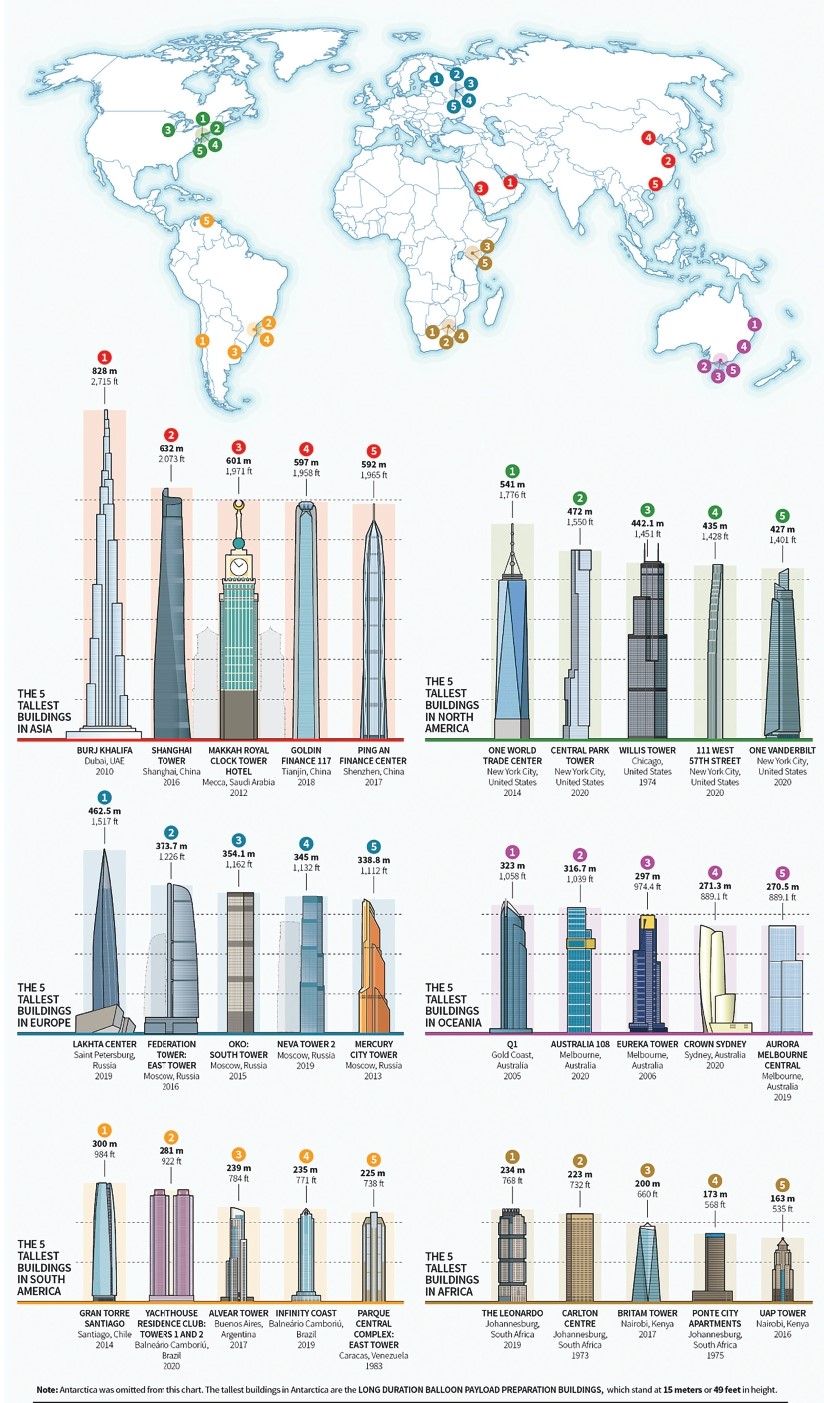 The first name on this list certainly needs no introduction. Dubai’s Burj Khalifa is one of the most popular tourist attractions in the Middle East. With just a one minute elevator ride to the Burj Khalifa’s pinnacle, it must seem like even the sky is no longer the limit.

Ping An Finance Center from Shenzhen edges into fifth place on the list, and it’s worth mentioning the speed of change occurring in the city. China’s hi-tech capital will see the completed construction of approximately 51 buildings over 145m (476ft) by the end of 2020.

The One World Trade Center, built to memorialize the loss of the Twin Towers after September 11th, 2001, is also informally called the “Freedom Tower”. It’s exactly 1,776ft high—symbolizing the year the U.S. Declaration of Independence was adopted.

While the Central Park Tower has reached its full height, parts of the interior are still undergoing construction. The price of luxury apartments in the complex start at $7 million for a two-bedroom, just in case you had any extra change lying around.

In fact, the illustrious New York City holds four of the top five buildings on the continent. However, a nod also goes to the Willis Tower (formerly Sears Tower) in Chicago, an imposing office building which held the title of world’s tallest building for 25 years, until the Petronas Towers were erected in Kuala Lumpur.

Each of us is carving a stone, erecting a column, or cutting a piece of stained glass in the construction of something much bigger than ourselves.

The top five tallest buildings in Europe can all be found in Russia. What’s more, those from Moscow are all clustered within a single towering business district known as “Moscow-City”.

Of course, with globalization, things have changed somewhat, and major financial centers of London, Paris and more boast unique skylines of their own.

Oceania: The Views Down Under

Australia’s buildings unsurprisingly dominate the tallest ones in the region. In the surfer’s paradise, Q1 on the Gold Coast has a twist in its design—literally. Its architecture is loosely based on studies of ribbons moving in the wind, as they wrap around the tower.

The Eureka Tower has a fascinating story behind it, too. It’s named after the 1854 Victorian gold rush, with elements of the building reflecting this history—from a gold crown to a red stripe for revolutionary bloodshed.

South America: Views From the Top

The tallest buildings in South America are mainly residential, and often found in Brazil, Argentina, and Venezuela—but Chile is the one standout exception to this rule.

Gran Torre Santiago is a retail and office complex, and the largest shopping mall across Latin America. It’s often considered the heart of Chile, and built to hold its ground steadfastly in the earthquake-prone country.

Located in South Africa’s largest city, The Leonardo is the jewel of Johannesburg. The tallest building in Africa was also designed by an architectural team of mostly women.

For African nations, these tallest buildings mean much more than just breaking engineering records. In a journal article, it’s posited that skyscrapers can act as a symbol of power and the continent’s drive towards modernity.

A few more mammoth buildings are expected to rise up in the next couple years. Saudi Arabia’s 167-floor Jeddah Tower, while currently on hold, could someday take over the first place crown.

Meanwhile, Dubai’s set to outdo itself—and compete directly with Saudi Arabia. The Kingdom Tower is inspired by the Hanging Gardens of Babylon, and is proposed to break the 1 kilometer-high (or 0.6 mile) mark not yet achieved by any building.

Who knows what greater heights we could scale this century?

This article was originally published on Visual Capitalist by Iman Ghosh.