Skip to content
Home
All News
Expect the Unexpected: Unicard’s Crypto Journey is about to Begin
The estimated reading time is 5 minutes
Georgy Aronia
October 3, 2022 at 5:46 pm

Let’s begin with a question: How much do you think the crypto market is worth?

According to the data from this July, the value of all crypto assets in circulation had been at $1.7 trillion. Yet, the best way to appreciate the significance of a figure like $1.7 trillion is by comparing it to the value of other industries. Let’s do it. The global telecommunications industry had almost the same market capitalisation at the beginning of 2022, when the automobile manufacturing stood at $3 trillion, and oil and gas exploration and production was valued at slightly more than $4 trillion.

However, the only thing that these numbers do not convey is the time. All three industries mentioned above span a history of more than a century when twelve years ago, crypto was just an idea; in 2021 it became the sixth largest base money on the planet, emerging at all times. Moreover, this capitalisation of $1.7 trillion is seen during the bear market (as we call it), when a bull run in early 2022 took the global crypto business far ahead of the telecoms and only a few digits behind the automotive industry.

Does all this mean that over the next decade, the crypto industry and its inclusive blockchain ecosystem will reshape the global economy? The answer to this question is still unknown, but one thing is certain: The topic is hot enough for us to review it and share some facts.

The NFT space had seen an uptick in interest since the boom, and there’s no surprise that many global brands, including Adidas, Nike, Samsung, and Coca-Cola, have jumped into the Web3-related technology world during the “hysteria” by issuing non-fungible tokens or by building branded virtual spaces in metaverse worlds, such as SandBox and Decentraland.

Meanwhile, number of tech giants have made significant contributions to the development, promotion, and most importantly – the stability of the internet 3.0. Meta (Ex-Facebook) is the first that comes to mind and at this point, it probably needs no introduction – we all know of Mark Zuckerberg’s plans to turn his social media empire into a leading metaverse platform.

Twitter is another social network that is evolving in this direction. While it would be incorrect to classify Twitter as a Web3 company before it moves to a blockchain, its adoption of NFT technology is still proof that the company wants to find its foothold in this next phase of the web.

Simultaneously, significant movements in the direction of blockchain ecosystems were witnessed in other world-wide corporations. In February of this year, for instance, Sudar Pichai, the CEO of Alphabet, Google’s parent firm, mentioned several areas of interest and hinted about adding more AR-based features to Alphabet’s applications and exploring ways in which blockchain technology can add greater support to popular services such as Google Maps and YouTube. Alphabet was not the first American company to make such a decision; Amazon Web Services (AWS) announced the availability of Ethereum on the Amazon Managed Blockchain back in 2021. Japanese entertainment giant Sony filed several patents that would allow it to accept cryptocurrencies for e-sports betting in video games.

Overall, the number of businesses heading towards the new web is much larger and expanding on an hourly basis, but the fundamental question remains debated: What cryptocurrencies, blockchains, and the internet of the future lack the most? A reasonable answer might be the incorporation of as many diverse, mature, and established firms as possible, as well as the maintenance of transparent connections with the financial sector. This entire process can be called Transformation 3.0.

Nowadays, there are two types of enterprises experimenting with the Web3 industry and the crypto world: On one hand, we have extremely wealthy giants who are neither scared of making mistakes, nor losing large sums of money, and on the other, we have newborn startups. Therefore, stable and strong businesses must bridge the gap between these two types of players. It’s worth noting that this ambitious and thought-provoking step was taken by a Georgian company, Unicard.

The choice made by Unicard is noteworthy since it looks like the company has been in the world of digital assets all along; we simply didn’t comprehend it, and neither did they.

“In 2020–21 when the phrase “digital asset” entered our everyday lives in so many ways and contexts, I eventually paused and asked myself what the Unipoint was, in its essence, if not a digital asset?” – states Nana Keburia, Executive Director of the Unicard Group, and the former Head of Georgian Card.

“It doesn’t matter how those points are generated or whether the ecosystem is based on a blockchain or not. Unipoints always were and still are used as a form of payment and they are also independently owned digital assets with a distinct utility backed by the partnerships with over 350 merchants and the with the user base of 1.5 million people”, – Nana Keburia says. 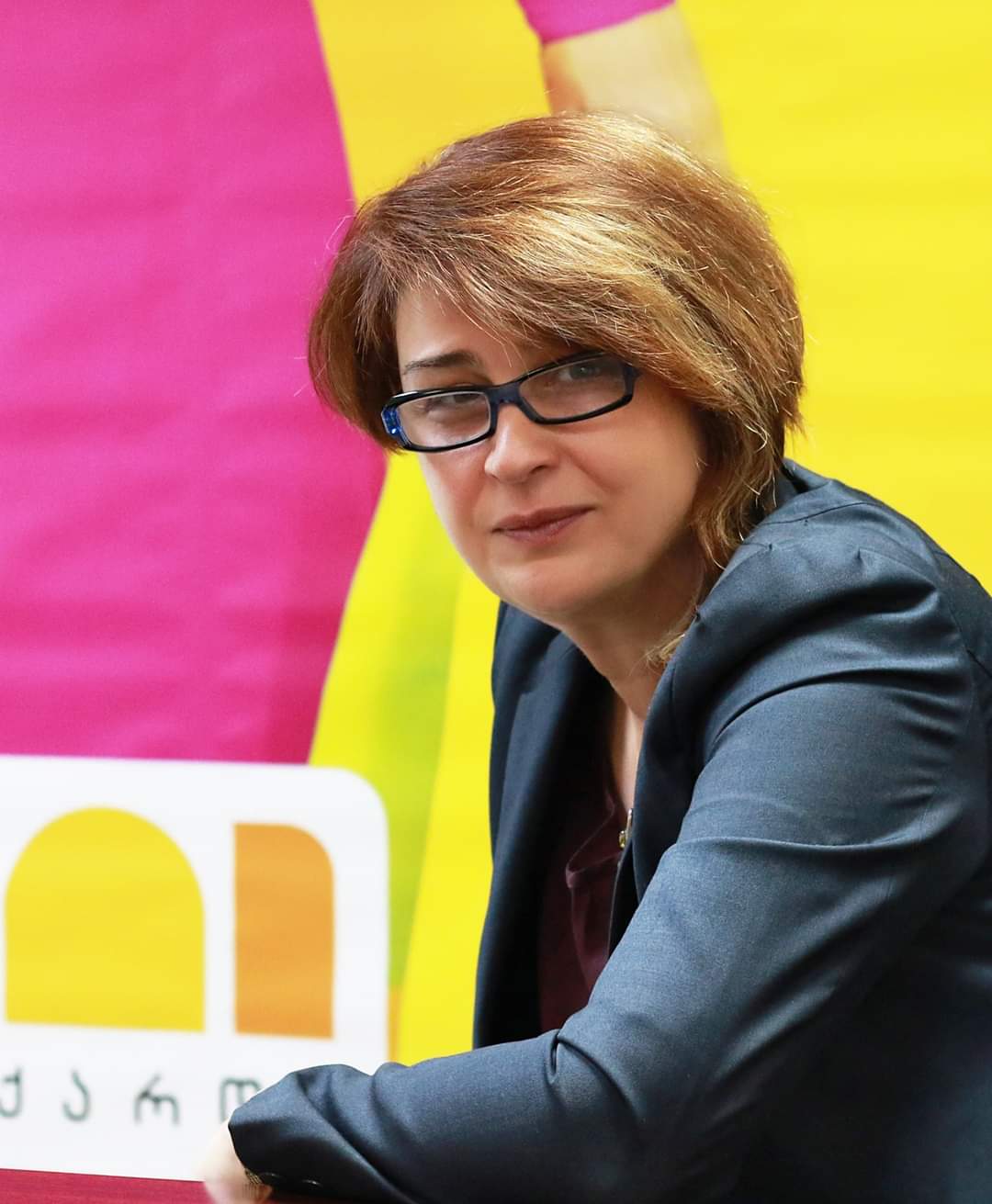 It’s difficult to disagree with Nana since Unipoints — or the points from any other loyalty card — are like digital assets. This was the inspiration for Unicard’s entry into the crypto world.

Ukraine is where our story takes us next, where a significant financial technology support center of a Visa CEMEA (SEE, Ukraine & CIS, excl. Russia) is located. According to Nana, she was looking for a competent advisor in fintech who could inform her of the major global strategies that could serve as the examples for intertwinement of cryptocurrencies, loyalty cards, and payment providers. But,in reality, CEO of Unicard was seeking the first companion, since, if there was a ready-made formula for such crossovers, she could have googled it. Nana requested guidance from Yevgen Lisnyak, Senior Director and the Head of Strategic Partnerships in Fintech and Ventures, and Diana Kighuradze, Regional Manager, both representing VISA International.

“Visa devotes significant efforts to examination and development of crypto area for the last years, and according to the company research interest in a cryptocurrency reward program, wherein a cardholder earns cryptocurrency as a reward for their spending, garners strong interest not only among consumers who already own cryptocurrency (84% Owners) but also is strong among those who are curious about cryptocurrency (82% curious), particularly in emerging markets (85% curious). Visa grew exhaustive internal expertise in this field, including strong connections with the industry leaders across the world” – Yevgen Lisnyak stated – “At Visa we believed the idea was definitely worth taking forward, recommending a company which is originally from Ukraine, as it worked previously on creating large-scale crypto products and had interest in crossovers between crypto and loyalty platforms.”

Diana Kiguradze, Country Manager at Caucasus region, Visa, added: “It’s a global trend that non-financial institutions, like MNOs, fintech, merchants, PSPs also enter this sector of financial services and payments, providing new and innovative products and solutions to customers or other businesses. At Visa we are happy to support them, and I am very glad that in Georgia we have such a partner as Unicard, that aiming at new segments and new offers to customer.”

At that very point, Volodymyr Nosov, a Ukrainian businessman and the founder of WhiteBIT, Europe’s largest cryptocurrency exchange, enters the story as a new protagonist.

“When I first listened to Nana, Diana and Evgeny, I knew that I should not limit myself to helping them with a piece of advice. It was clear that we should have created this unique collaboration, and it should have been not only cooperation but a full-fledged partnership,“ says Volodymyr. “This story had everything: points as the digital assets, merchants and customers, VISA and Unicard’s Visa payment cards. Behind all these were Georgian market’s most experienced companies. We soon realised that we had to partner up with Unigroup and invest in the company. So we did.”

Today, when WhiteBIT owns a significant share of Unigroup, the conglomerate is working on a brand new and an interesting offer for Unicard’s customers: Cryptocurrencies in exchange for accumulated points.

We shall soon learn how to convert Unipoints into cryptocurrencies. But now, let us tell you a lesser-known fact: if you accumulate points through PayUnicard’s VISA cards, you’ll be ahead of the game.

The General of Alcohol Industry

Holding the Reins of Industrial Construction

Another Global Recognition of the Bank of Georgia by Global Finance