Skip to content
Home
All News
What Impact Will the Russia-Ukraine War Have on the Georgian Economy?
The estimated reading time is 6 minutes
Beso Namchavadze
April 5, 2022 at 4:00 pm

On the 24th of February, Russia initiated a full-scale war in Ukraine, which had an immediate effect on the Russian rouble and on Russian assets, as well as the Georgian lari. On the first day of the invasion, the value of our currency fell by 11 tetri against the US dollar. In the longer term, Russian aggression in Ukraine will negatively affect the Georgian economy in the following ways:

Since the war in Ukraine can hurt the Georgian economy in several ways, it is currently impossible to accurately predict the extent of the damage. This can be done post factum once we have the economic figures from this period to hand. Nevertheless, by examining current Georgian-Ukrainian and Georgian-Russian economic relations we can determine the maximum damage that can be sustained by our economy.

Georgia is economically far more dependent on Russia than on Ukraine. Over the past two years, the COVID-19 pandemic has significantly reduced economic relations between the countries, especially in the field of tourism. In 2020, our revenue from service exports (including tourism) fell by $4.8 billion. Consequently, our economic reliance on Russia was also reduced. Money transfers, exports and tourism revenue from Russia amounted to $1.6 billion in 2019 but fell by $700 million in 2020. Economic relations started to recover in 2021, and Georgia received revenue totalling $1.3 billion from the aforementioned three sources. With regards to our dependence on Russia in terms of GDP, the figures are as follows: Money from Russia accounted for 9% of GDP in 2019, 5.7% in 2020 and 6.7% in 2021.

In 2010, Georgia’s export revenue from Russia totalled $610 million. Russia holds a 14.4% share in Georgian exports, which is second only to China. Export of Georgian goods to Russia increased by 38% year-on-year in 2021, with ferroalloys accounting for $172 million in export revenue. Traditionally, the wine sector depends heavily on the Russian market – in 2021, Georgia’s wine exports to Russia totalled $131 million, which was 55% of the country’s total wine exports.

Georgia has a negative trade balance with Russia, meaning that we import more goods than we export to that country. Imports from Russia surpassed the one-billion-dollar mark in 2021. The share of Russian goods in total imports was reduced to 10.2%, which is second only to Turkey. Vehicle fuel accounted for the largest share of imports from Russia (13%). Georgia’s dependence on Russian wheat is particularly noteworthy. In 2021, we imported 319,000 tonnes of wheat worth $87 million from Russia, which is 94% of all our imported wheat. Russia also accounts for 96% of our wheat flour imports.

The extent of damage sustained by the Georgian economy via Russia will depend on the effect of sanctions on the Russian economy. Complete cessation of exports, while out of the question, would damage our economy to the tune of $600 million. Wine exports are particularly vulnerable, as they have already been used by Russia as a political weapon in recent years. The potential disruption in wine export will have an acute effect on Georgia.

Georgia’s dependence on Russian tourists was reduced to a large extent by the pandemic. Consequently, our losses in this field will not be substantial. Russian tourists spent approximately $700 million in Georgia in 2019, but this figure fell by 65% to $240 million in 2021. In 2019, Georgia had around 1.5 million visitors from Russia, but only 213,000 in 2021.

The share of Russian visitors in 2021 was 11.3% of the total number of visitors to Georgia.

Money sent by Georgians residing in Russia has traditionally been an important source of revenue for our country. In 2021, money transfers from Russia to Georgia totalled $411 million, accounting for 17.5% of all transfers. These streams of funds will be the most difficult to curtail, as many Georgians who work in Russia also hold Russian citizenship and are unlikely to face many restrictions on their activities. On the other hand, the economic problems caused by sanctions will also affect Georgians working in Russia. If we look back at the 2015-2016 figures that followed the imposition of significant sanctions on Russia, the amount of money sent to Georgia this year is likely to be reduced by half.

To summarize, Georgia will lose up to $1.3 billion worth of revenue from Russia in the worst-case scenario. However, this would only happen if economic relations with Russia were to cease completely, or if the Russian economy was totally destroyed, the likelihood of which is not very high. More realistically, we are likely to see a repeat of the 2015-2016 scenario, when Georgia’s revenue from money transfers and exports to Russia fell by half. At that time, tourism continued to grow, but visitor numbers have since been hit by the pandemic. Therefore, the most realistic scenario would see Georgia lose between $500 million and $600 million in annual revenue. War in our region and the slowing of the global economy will have additional effects on Georgia that cannot be monetized and expressed in figures at this stage.

Georgia depends far less on the Ukrainian economy than on the Russian one. Ukraine ranks fifth on the list of export destinations for Georgian goods. In 2021, the total value of Georgian exports to Ukraine was $307 million, representing a 41% increase year-on-year. With regards to imports, Ukraine ranks seventh, with last year’s imports totalling $418 million. With a value of $88 million, re-exported passenger vehicles are the most common single commodity exported by Georgia to Ukraine, followed by spirits ($43 million), fertilizers ($38 million), and mineral water ($26 million) and wine ($26 million). The most common commodities imported from Ukraine are cigarettes ($78 million), metals ($23 million) and medicine ($21 million). 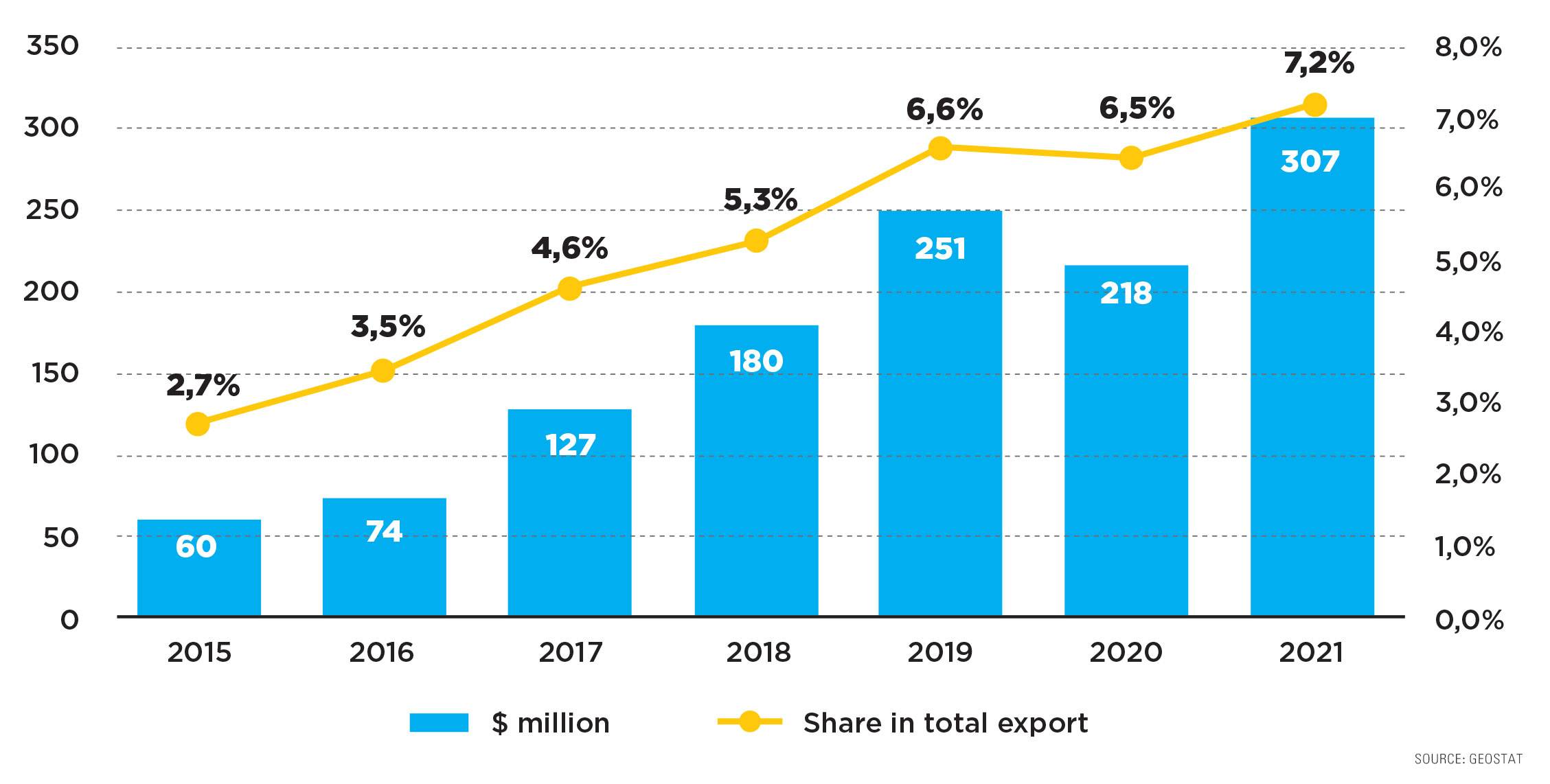 Money transfers from Ukraine totalled $93 million in 2021, representing a 4% share of total transfers.

In the worst-case scenario, Georgia stands to lose $1.5 billion in direct revenue because of the war between Russia and Ukraine. The more realistic forecast will see us lose between $700 million to $800 million, which represents 4% of Georgia’s GDP. Additionally, the war will have an effect on other countries in the region, as well as the world. Ultimately, Georgia’s economic growth figures could fall to 2% or 3%, as in 2015-2016. The Georgian population will further suffer due to currency depreciation and subsequent inflation. Russia and Ukraine are major sources of food for Georgia. Reduced imports from these two countries will lead to higher food prices on the Georgian market.