Georgia now has a place on the global vacation exchange map. The leading Georgian construction-developer Alliance Group recently announced its partnership with the world’s largest vacation exchange company, RCI. “We are talking about 4 million RCI member families, which means 10 million new potential foreign tourists to our country,” says Akaki Songulia, general director and co-founder of Alliance Group. As a way to offer an unprecedented opportunity to the owners of properties developed by Alliance Group, Songulia founded Alliance Vacation Club last year. From now on, apartments ‘owners will have the opportunity to exchange vacation ownership at more than 4,000 premium resorts in over 100 countries around the world. Alliance Group properties enjoy Gold Crown Resort status, meaning access to an additional 200 elite holiday locations.

At present, the RCI network includes the Alliance Palace multifunctional complex in Batumi, which includes more than 1,000 apartments. Once completed, the Alliance Highline multifunctional complex in Tbilisi, with its 700 apartments, and the Alliance Privilege, with another 1,000 apartments, will also be joining the network. Apartments’ owners will be free to choose to either reside in their properties, or rent them out through an international management company, or hand them over to RCI for a certain period of time – for example, one week – and choose any location from the global network in return.

The most recent RCI Gold Crown resort property Alliance Group is developing is the Alliance Privilege multifunctional complex in Batumi. This 54-story, state of the art multifunctional complex will house the first five-star Marriott hotel on its first 12 floors, and the upper floors will contain exclusive apartments. Alliance Group signed the second franchise agreement with Marriott International on February 8, 2018 in Zurich, Switzerland; the first agreement involved the Alliance Palace project where a four-star Courtyard by Marriott hotel takes up the first six floors. “Cutting edge architecture is what we’re developing with the Alliance Privilege multifunctional complex, and this is what we’ve being doing all the time in all our ultramodern projects,” says Akaki Songulia. Exclusive architecture, a characteristic of Alliance Group, is obvious in the first franchise project, an arched 41-story multifunctional complex. According to Songulia, this $45 million complex has been a huge success already, as only 5% of the premium apartments are left for sale. Construction of the Alliance Palace will be completed this year. The Courtyard by Marriott hotel will open in the complex later in 2019. In a year, the Alliance Privilege will also be ready, and the 160-room Marriott hotel will receive its guests a year later, in 2021. This luxury multi-functional complex is being built with ecologically safe and energy-efficient materials. The Alliance Privilege develops infrastructure in accordance with the five-star standards of Marriott International: 2 floors of underground parking, a swimming pool with sea water, a spa and fitness center, a lounge and restaurants, casino and many other facilities. The complex will be operated by McInerney Hospitality International, an international management company affiliated with Marriott International.

Alliance Group is investing $80 million in this innovative project. The general director of the company says Alliance Privilege will benefit the country by contributing tourism income, as will also benefit property owners and the company itself. “It’s an investment in business,” says Songulia. As he explains, the minimum price for buying a premium apartment at the Alliance Privilege starts at $1,200 per square meter, which is predicted to reach $2,600 in three years when the complex construction is completed. “Not that you get investment return, you also get the property with increased value,” says Songulia. As he explains, with an investment as small as $50,000, one can become the owner of an Alliance Privilege apartment, then let the company rent the property and have the investment returned within 4-5 years. “Affordable prices and flexible purchasing conditions make the complex even more attractive for both local and international buyers,” added Songulia. Making a 30% or 15% down payment is the first step to becoming a property owner. The remaining costs can be covered gradually, using the company’s interest-free loan. One can also use the services of Alliance Group’s partner banks, and receive mortgage loans in one day, without income verification. Alternatively, the buyer can purchase an apartment by providing a lump sum payment and receive a discount in the process. The Georgian construction-developer is offering an international bank guarantee for the purchase of its apartments. According to Songulia, 80% of the apartment buyers are foreign citizens. “While investing in the properties developed by Alliance Group, as an investor, you are offered the best business environment,” notes the co-founder of the company. He adds that safety is one of the most important signals for investors, and Georgia is one of the top safest countries in Europe. Ownership registration takes only 15 minutes, no property tax is paid and a residence permit is provided.

Foreign investors, according to Songulia, are a top priority for a small country like Georgia. This strong belief led Alliance Group to bring the aparthotel concept to Georgia in 2008, and the same belief motivated the company to build a multifunctional complex combining apartments and a hotel in partnership with the internationally-acclaimed Courtyard by Marriott in 2015. Later, Alliance Group incorporated Ramada – another international hospitality giant – into its Alliance Resort project. In 2017, the developer added a residential aspect to the sophisticated business concept of the aparthotel, along with a global hotel brand at its Alliance Highline project, a development featuring Wyndham Garden hotel and apartments. The most recent is the RCI deal.

“It’s not quite about the number of foreign visitors, it’s about quality as well. RCI members have already paid for accommodation, so they have more money to spend in the country,” says Dimitris Manikis, RCI’s vice president for business development in Europe, the Middle East and Africa. According to the Georgian National Tourism Agency (GNTA), from January to December of 2017, the number of international arrivals in Georgia amounted to 7,554,936, an increase of 18.8% compared to the same period during the previous year. The majority of foreign travelers were Azeri (-0.6%), Armenian (+24%), Turkish (+24%), Russian (+19.2%) and Iranian (+110.5%). Manikis says that RCI will add new countries to the top listing: “Georgia will attract foreign visitors from new markets. We cover the world.”

The RCI vice president says that in business it’s important to make the client happy. “When I first met Akaki, he told me that his primary goal was to build something that is in the best interests of the buyers. I knew I was talking to my partner. We think likewise.”

Alliance Group is currently working on the four construction projects involving some of the   world’s largest hotel networks: the Alliance Palace in Batumi, which will include the Courtyard by Marriott Hotel; the Alliance Privilege in Batumi, which will present the Marriott Hotel; the Alliance Resort in Goderdzi, which will house the Ramada Hotel; and the Alliance Highline in Tbilisi, which will incorporate the Wyndham Garden Hotel. The latter is part of Wyndham Worldwide, one of the world’s leading hotel networks, which also includes the leading vacation exchange company RCI. It consists of three divisions: Wyndham Destination Network, Wyndham Vacation Ownership and Wyndham Hotel Group. It is the world’s largest hotel company, with more than 8,100 hotels and 708,500 rooms in 78 countries. The company encompasses 20 hotel brands, including Ramada, the fastest growing hotel brand in Europe. Wyndham Worldwide generates $5.5 billion in revenue. As for Marriott International, it reports revenues of more than $17 billion, and is the leading global lodging company, with more than 6,000 properties in 122 countries and territories. 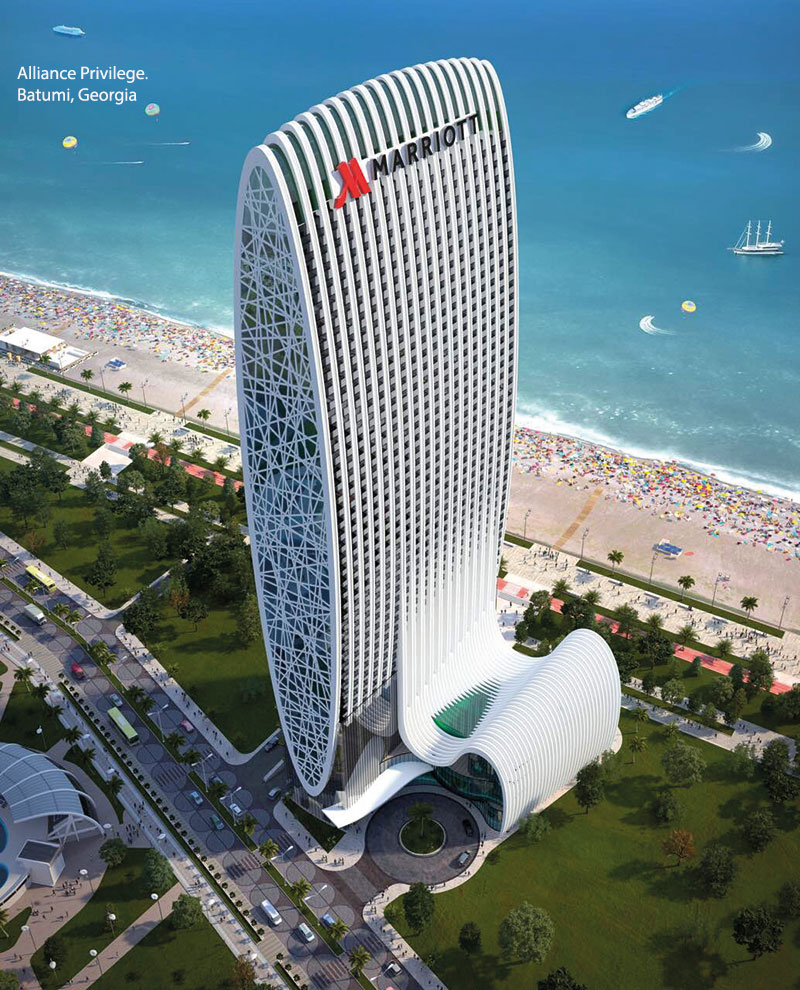 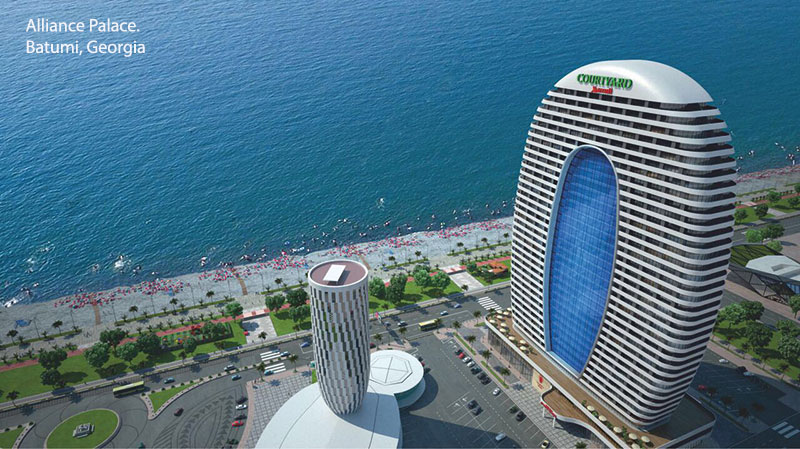