Skip to content
მთავარი
ბლოგი
Should you invest in gold?

Should you invest in gold?

If one must claim the phrase “I told you so” that would be Bill Gates. Most of you would agree that taking precautionary measures is far more difficult than facing the consequences after the fact. The idea of contributing a portion of the budget towards having a safe future sounds challenging; however, it does help you have a speedy recovery from a slow economy. Two years ago, the co-founder and former CEO of Microsoft urged governments and investors to step up their preparedness in the event of a global pandemic. Having a threat of pandemic is more dangerous than any other threat that the humanity can face nowadays. The longer the pandemic lasts, the longer it will take to reactivate the economy. Due to less consumption by the population, and due to the time it takes to find a vaccine, economy is undergoing a long downtrend.

This leads me to believe that holding gold is usually a good portfolio diversifier, especially in the times of crisis we are facing today. So far this year, Stock index around the world decreased the value, while on the other hand prices of metal have gone up.

Trading with gold always reminds me about the gold-silver ratio which investors use to measure sideway movements of silver versus gold, quantifying the amount of silver one would require to purchase one ounce of gold. The higher the ratio, the global consensus is that silver is favored, and on the other hand, when the ratio is low, people tend to buy more yellow metal. With this being said,  if one investment flops, alternate investments will go up.

Gold can be an excellent asset to own as it serves as a natural insurance, preserving your wealth in times of inflation since it is a highly liquid asset, and it may serve as a safe haven in times of economic instability. The benefits of the gold-silver ratio come to play when there are fluctuations in the economy. If the ratio between gold and silver widens enough the investors can gain money from selling gold and buying silver.

Throughout these years, the gold-silver ratio has experienced a high volatility.

Generally, in bullion bull markets, gold tends to outperform silver in the beginning, but silver on the long run outperforms gold in a more speculative environment. By speculative environment, I refer to the bubble that happened back in the 1980’s when the Hunt Brothers tried to corner the silver market. These two brothers were among the richest people in the world in the 1970’s. Their father was a well-known card-player gambler who then became an oil investor. His acquisition of oil fields in Texas became one of the largest oil pools in the United States.  When Hunt died in 1974, he was the richest man in the world.

Both of Hunt’s sons, which inherited his father’s wealth, believed that government was the root cause of the slowing economy. This anti-government viewpoint led the Hunt brothers to fixate on the silver market.

Due to high inflation in 1974, Bunker and Herbert started thinking about investing in solid assets like Gold and Silver as government bonds were decreasing its value as time passed by. 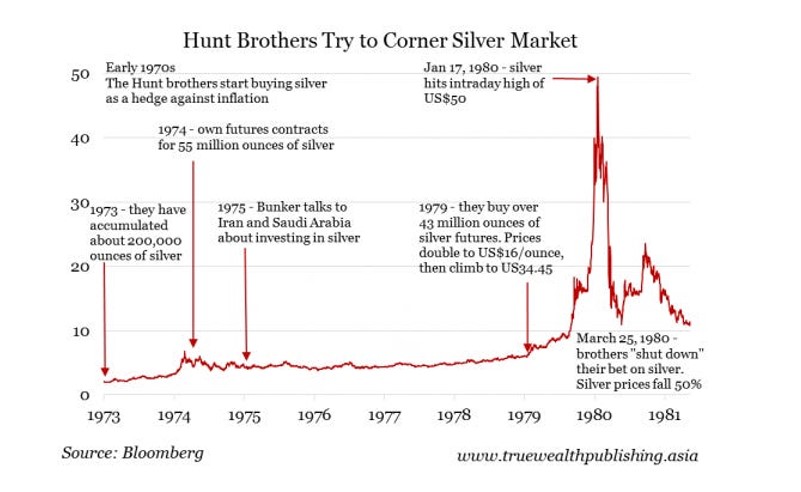 Due to different factors such as, Iran and Saudi Arabia increasing the rate of silver purchase, investors increasing their contribution to silver, the price of silver went up significantly. As a matter of fact , the price of Silver hit its highest price point in history at $50.50. At this point the government announced that people could only sell silver and would not be able to purchase any more. This action decreased the price of silver significantly, causing many investors, among them the Hunt brother, to lose a substantial amount of money.

This historical event gave speculators a very good example that all gamblers are subject to the house rules. The Stock Exchange will always change the rules in order to protect itself.

After this event, investors started selling Silver or exchanging it with Gold. During Hunt brothers’ era, the gold-silver ratio fell significantly as the silver price was going up, but after the events the ratio went up, letting investors to exchange the metal for their benefit and hedge between both metals.

Precious metals have a proven history of maintaining their value even in the volatile economy. It is an obvious fact that trading with metal has drawbacks too, but in today’s world being given a possibility to exchange two metals with no dollar value opens doors to investors.

“Gold is a way of going long on fear”, said Warren Buffet. In today’s economy investors’ fear is particularly high as coronavirus pandemic turned a health crisis to an economic crisis. It is uncertain when the economy will recover and in such times,  investors seek for the safety. In addition, stock experts predict that the crisis will get worse. The mining expert Gwen Preston believes that even though the US has taken extreme measures to recover from the downturn we are not yet close to coming out from the woods.

Gold’s price during COVID-19 has been gradually rising. Gold is breaking into new all-time highs against most currencies in the United States. It is expected gold prices to continue its upward path this year due to the idea of a safe haven, low to negative interest rates and strong gold ETF buying.