Very little time is left before the completion of a one-year working process, whereby, following the Prime Minister’s final approval, “National Tourism Development Strategy 2025” will be adopted, and the society will have a chance to see it.

The document was developed in collaboration with the government, the private and the non-governmental sectors. In it we can see plans for sustainable development of the industry, as well as a 10-year action plan for increasing income and work places. The analysts of the World Bank and the international consulting company “Solimar International” were involved in the working process, and their recommendations are fully considered in the document. It is also of much significance, that throughout the year, consultations were held with a wide range of organizations and specialists, including tour operators, transportation companies, investors, units responsible for protected areas and cultural heritage monuments, as well as representatives of central and local governments, in order to fully address the interests of all stakeholders.

As for the content, the document is divided into two parts. The first part gives us detailed results of the situational analysis, including the increase of the importance of tourism, as well as identification, research and analysis of the main interfering factors, and possibilities for maximal payoff of the investment. The second part combines recommendations of the work group and the action plan for strategy implementation, which also defines the units responsible for different activities, implementation of the timeframe, and the target rate.

One of the main objectives of “Strategy 2025” is to attract tourists with high-paying ability from the EU, North America and other neighbouring regions. In order to achieve the above-mentioned goal, the implementation of the following 8 steps is planned: 1) protecting and improving Georgia’s natural and cultural heritage; 2) using Georgia’s natural and cultural heritage assets for unique and authentic travel impressions; 3) increasing competitiveness through offering world class travel services; 4) attracting tourists from high-paying markets through an efficient marketing and informational campaign; 5) improving data gathering and analysis, and evaluating possibilities in the tourism field; 6) improving the business environment in order to increase foreign and local investments; 7) increasing government and private investments in tourism; 8) establishing partnerships between the government, the tourism industry, non-governmental organisations and communities in order to achieve the abovementioned objectives.

According to the document, the important role to play has the implementation of infrastructural projects and increase of the share of tourism in the national economy. Within the next 10 years, as a result of the increased amount of money, spent by the visitors, the contribution of tourism to the Georgian economy should increase significantly. In particular, the document envisages a large-scale increase of the income received from tourism in the Gross Domestic Product (GDP) from current $1.8 bn to $5.5 bn.

It should be considered that besides Georgia’s typical traditional trends, such as ski or marine tourism, it is planned to develop and promote relatively new fields, such as cultural-educational, recreational, health and spa, adventure, agriculture and MICE tourism. Georgia has huge resources in these areas, which will be promoted by the Government in the coming years.

We spoke to the Head of the International Relations Department of the National Tourism Administration Tornike Zirakishvili on “Strategy 2025” and about the objectives to be achieved in the future. According to him, the main objective of the Tourism Administration is to increase the number of foreign tourists. According to the data, the total number of international travelers entering Georgia in 2015 was 5.9 million, and based on the strategy, by 2025 it is planned to continue the increasing trend and to reach the 11 million mark. Furthermore, he added that improvement of the quality of service and infrastructural conditions will increase the amount of money spent by the tourists and will augment the role of tourism in economics.

In 2008, an analogous document was created by the National Tourism Department, which was evaluated while developing the current document. According to the then-representatives of the National Tourism Administration, the previous document was more volumetric and less pragmatic. The newly developed strategy is oriented towards rapid practical steps, which gives the opportunity to achieve the objectives in a more efficient and timely manner.

According to the creators of the strategy, the main and fundamental parts will be left unchanged, but there are some parts which may be reviewed and re-evaluated in the future. This is due to the dynamic character of the document.

“National Tourism Development Strategy 2025” includes the 10-year vision for the whole country, but a total coverage of all necessary areas is impossible. For this reason, it is planned to develop several documents with narrowed directions, based on the main document, which will support the tourism sector more efficiently.

According to the representatives of the Tourism Department, the document created for the development of national tourism will soon be approved in its final form, and its scheduled review is planned 5 years after its adoption. 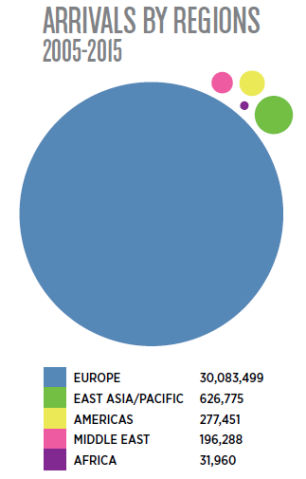