The economic growth and development of any given country is determined by many factors. However, investment growth is most important among these factors. Investment, or investing capital in goods and services can be domestic or foreign. In both cases investments are created by saving.

Georgia has a low level of saving. This is largely because the majority of the population is low-income and cannot afford to save. Sucha state of affairs raises the need for attracting foreign savings. Moreover, foreign investments are made in foreign currencies that in turn encourage exchange rate stability of the lari, Georgia’s national currency. In many cases, foreign investment brings knowledge, knew technologies and raises awareness.

In this article we will focus on Foreign Direct Investment (FDI), since it has been viewed as something that impacts economic growth. According to the current methodology applied by the National Statistics Office of Georgia, investments are considered direct if the share of the investment in the stock capital of the company exceeds 10%. Holding a controlling ownership interest is not required. Loans can also be considered foreign direct investment if the liability is backed by company assets. Essentially FDI is associated with the founding of a new company by an investor or the purchase of shares within an existing company, which promotes a production increase and creates more jobs. Economic growth is an increase in the capacity of an economy to produce goods and services.

In addition to the domestic business environment, the degree of FDI depends on the economic environment around the world, particularly in the investing countries.For instance, before 2007, FDI was growing fast around the world surpassing$3 trillion in 2007(Graph 1). During the world financial crisis in 2008-2009, Foreign Direct Investment decreased by 56%. In 2010-2011, FDI began increasing again, but by 2012, it had the tendency to decline.

In 2007,Georgia followed the investment trends around the world by reaching a record volume of investmenttotaling$2 billion(Graph 2).Beginning in 2008, due to Georgia’s war with Russia and the world financial crisis, investment started to fall and in 2009 total FDI sank to$658 million. Since 2010 however, investment showed a tendency for growth and in 2014,FDI reached a record $1.8 billion(2008-2016). Since 2014, the increase in investment was largely related to the construction of the new Shah Deniz 2 gas pipeline. Within the framework of this project, FDI in Georgia exceeded a billion dollars. However, investment started to decline in the first half of this year, compared to the same period in 2016. The volume of investment expressed in nominal figures does not show whether the investments made in Georgia are large or small. For example, while a$3billion investment is considered large for Georgia, it is almost nothing for the United States. Therefore, the volume of investment must be measured against the economy – the GDP of a given country. The year 2007 was quite successful in this regard, since the investments as a part of GDP reached 19.8% (Graph 2). Over the past ten years, the worst indicator was in 2012-2014, when investment as a part of GDP fell to 5.8%. Since 2014, investment in GDP started to increase and according to the preliminary date, reached its highest (11.2%) in 2015. However, we should take into account the fact that due to the inflation of the Georgian lari, the GDP expressed in dollars decreased from 2015-2016. This contributed to the increase in the investment to GDP ratio. In the first half of 2017, the investment in GDP ratio decreased to 10.7% due to a reduction in investments and GDP growth. 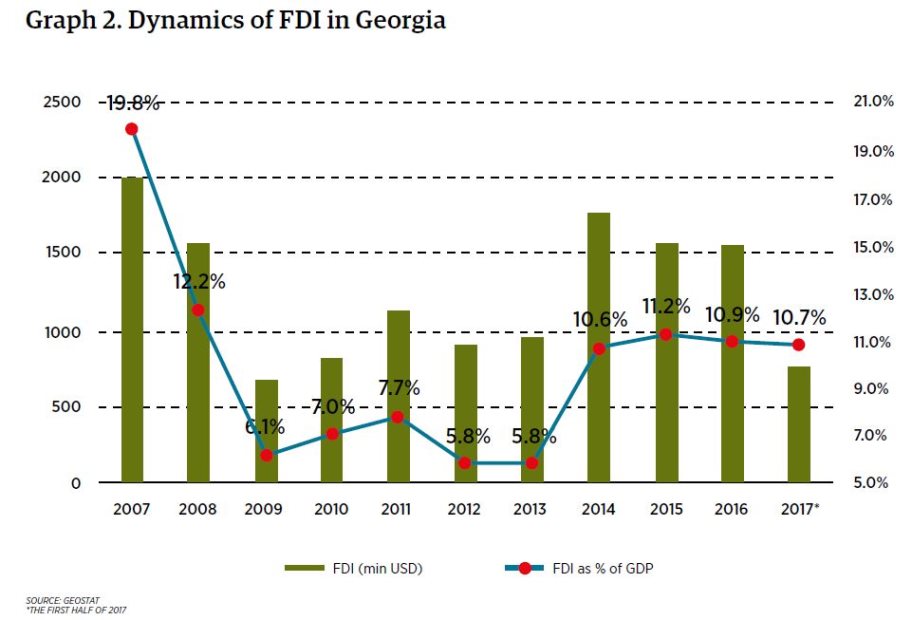 The statistical data on Foreign Direct Investment in Georgia since 1996 shows that for the past 22 years (1996-2017) total investment in Georgia was $17.1 billion – on average $800 million every year. For the past 22 years, the largest investor was Azerbaijan ($2.4 billion), followed by the United Kingdom ($1.9 billion) and the Netherlands ($1.7 billion)(Graph 3). The investments made by Azerbaijan and Great Britain (mainly British Petroleum) are mostly related to the oil and gas pipelines passing through Georgia that connect Azerbaijan’s oil and gas with Turkey.

It is interesting to learn which sectors of the Georgian economy attract the most FDI. The information broken down by sectors is only available from 2007. Therefore, if we look at the statistics from the past 11 years from 2007 through 2017 (Graph 5), we will see that the largest Foreign Direct Investment was made in the transportation and communication sector ($3.5 billion). This sector ranks first due to the large investments in pipeline transportation. The energy sector comes in second position. Investment in the energy sector is mainly related to the construction of hydro power plants. The agricultural sector had the least FDI from 2007-2017 at $136 million (average annual FDI $12 million).

As mentioned above, in order to attract investment, Georgia needs to create a business climate that is more attractive than other countries. There are a number of influential organizations that study business climates and based on this index they publish respective ratings. However, I would like to highlight the Ease of Doing Business Index and the Index of Economic Freedom published by the Heritage Foundation. Georgia holds the 16th position (3rd in the region) in the first rating and 13th (5th in the region) in the second rating. Being in the top 20 is already a good achievement. However, these ratings do not reflect political stability and the threat of war. Nor do they show that a significant portion of Georgian territory remains occupied, or that Georgia fought a war with Russia just 9 years ago. Russia is the most damaging factor for the business climate of Georgia.

We can also discuss the state of democracy in the country and its related problems. According to the Democracy Index published by the Economist, Georgia is ranked 78th in the world and the Georgian government is categorized as a hybrid regime. Georgia received the lowest scores in the functioning of government and political culture categories that are used in calculating the Democracy Index.

Georgia’s investment attractiveness is also tainted by the fact that the country has insufficient natural resources, even though it is the geographic location of Georgia that attracts the most investment. This probably explains why the largest  share of investment is made in the transportation sector.

Another factor that has a negative impact on Georgia’s investment attractiveness is the country’s low overall level of education, which results in lack of qualified workers. On the other hand, the number of unqualified workers is not large enough to compete with Asian countries with huge populations. Additionally, there is marked shortage of English language skills among the country’s workforce.

Georgia’s investment advantage lies in its liberal foreign trade regime (particularly free trade agreements), the absence of control on the movement of foreign capital, as well as a rather liberal visa regime (citizens of approximately 90 countries enjoy visa-free travel to Georgia).

Rapid economic growth is essential for Georgia. However, this requires more Foreign Direct Investment every year compared with the previous year. The volume of FDI in recent years can be considered as the average volume. Even though today the world is not witnessing the kind of investment boom that was experienced in 2006-2008, it is still possible to attract more investment if we ensure a better business climate.

All things being equal, in order to achieve double-digit economic growth, the FDI in Georgia must reach at least $3 billion annually, which requires improvement of all the factors that hurt our business environment. The Russian factor is hard to resolve. However, flaws in property protection, the level of democracy and education can be overcome if there is the political to do so. 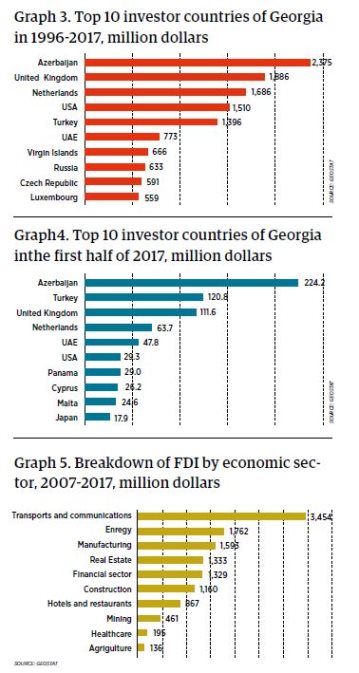