Michel Sogny is a French composer who made a name for himself by developing a new approach to teaching piano. His innovative method has received worldwide recognition, and has enabled students of all ages and walks of life to learn the piano. In 1995, Sogny established a music institute in Austria called ‘Villa Schindler’ and later created the SOS Talents Foundation. Through the efforts of famous Georgian pianist and UNESCO artist Eliso Bolkvadze, this foundation has served as a springboard for many Georgians’ international music careers. In 2017, the President of Georgia awarded Mr. Sogny with the Order of Honor for his special contribution to the development of the field of music in Georgia.

You have an entirely different method of teaching the piano. How did you come up with the idea and what was the process of developing this innovative teaching technique?

As I worked on my Ph.D. with the renowned professor and philosopher Vladimir Jankélévitch at Sorbonne University, we often discussed the art of conveying music.

Vladimir Jankélévitch was convinced that the Golden Age of music occurred during the period of ancient Greece, when music played a very important role in the development of one’s personality. Music reflectedthe sophistication of the soul and was an integral part of everyone’s daily life. Pythagoras always taught his disciples to play the harp before going to sleep. All of this was done to purify the soul or as we call it today – reduce stress and anxiety. It was achievable at the time because music was much simpler, instruments were used as mediators and the voice allowed people to express their feelings. There is no analogue to this metaphysical process, since it allows you to understand your feelings through your fingertips.

Over time, the language of music became more complicated, which consequently led to the modification of musical instruments. It gradually became harder to master these instruments. This has become the obstacle that helps discourage people from entering the world of music.

You have devised a system of playing the piano that enables people to overcome this obstacle. Could you tell us what your teaching method is all about?

When I was working on the development of the new system of piano playing, my ambition was to discover the spirit of music that has been missing for so long and to help people experience the pleasure of expressing their feelings the moment they start mastering the instrument. In order to form this philosophy, I was forced to disregard the existing methods and create my own teaching approaches that would focus mainly on two directions. I wrote approximately four-hundred prolegomena to piano cycles (Prolégomènes à une eidétique), which facilitate the perception of sounds through simplified musical structures.

The second part of the teaching methodology includes approximately 300 progressive etudes for the piano. The main technical complexities have been reduced to a minimum, while the musical aesthetics remain intact, which make it possible to achieve one’s own interpretation and develop individualism.

Musical cycles have progressive complexity and allow students to master the instrument in a short period of time.

Don’t you think that the teaching methods practiced by most musical schools are rather outdated and for that reason, learning music is regarded as an unpleasant experience?

Indeed, the teaching methods at the conservatoires have not been subject to any major evolution and they still employ the 19th century teaching technique. The world has changed its attitude towards time. Conservatoires still use some musical pieces that were not meant for teaching. For instance, Chopin, Mozart and Beethoven would have never thought their pieces would be used for those purposes. It is the same as if we used excerpts from Shakespeare to teach English …of course it’s possible, but that would make the whole process extremely difficult. That might be the reason why so many students quit learning music. These complications put them under pressure. The piano is a very hard instrument as it is and it would be impossible to master it without staying motivated all the time. This requires gradual progress and that is the kind of experience that the followers of my method experience.

Does your teaching process incorporate the development of creative skills that would enable pianists to make their own musical pieces?

First of all, this method allows one to master    the grammar of piano playing and solfeggio. Being able to read piano notes and sheet music is a crucial factor. However, composing your own music is a different dimension and requires special training. My teaching method incorporates the first steps of initiating the process of composing music, but the next process depends on the skills and musical tendencies of the student.

Can talent be achieved through hard work and practice?

Needless to say, there is an innate talent, which is really a skill that allows you to create a special bond with the instrument. However, talent requires persistent and proper development; and energy has to be managed proportionately, so that a person does not become a victim of their own talent. There are plenty of examples when less talented kids achieve phenomenal results through proper development and learning.

Does innate talent play a crucial role in your teaching method and is it ever too late to start mastering the instrument?

My method of teaching is not based on innate talent and age. It provides people of all ages and innate talents an opportunity to enter the world of music and experience happiness from their own interpretation of music without forcing them to ask themselves the question: “Am I talented enough to do this?” This method makes piano playing accessible for everyone, even if you are eighty years-old …

I am very pleased that since 1975, I have been able to pass on my passion for music to more than 20,000 people. The results of my method have exceeded all expectations. French language teacher Michelle Paris set the first unique precedent in the history of the art of piano when she began learning to play the piano at the age of 27.By 1980 she had already held her first solo concert at the Théâtre des Champs-Élysées, where she played some of Franz Liszt’s most challenging pieces.

This story is described in one of my recent books titled l’Adulte Prodige that will soon be adopted for the screen.

The SOS Talents Foundation supports many young pianists that learn piano playing based on your method. This foundation helps students from all over the world, including Georgia, take part in various international contests. Could you tell us how you founded SOS Talents?

In 1995 I went to Tyrol, Austria at the invitation of Lord Yehudi Menuhin and Annemaries Schindler, where I founded a musical institute called Villa Schindler. We were inspired by the Villa Medici. Villa Schindlerwas mainly designated for pianists. The invited pianists had a chance to work based on my method and improve their capabilities.

The first pianist that received our scholarship was Eliso Bolkvadze. She invited me to Georgia in 1997, a period in which your country was undergoing a very difficult time. At her request, I listened to some young Georgian pianists. Eliso Bolkvadze wanted them to have a chance to study piano playing based on my method. So, I invited Khatia and Gvantsa Buniatishvili to Villa Schindler. The working process at Villa Schindler was so impressive that in 2000, I decided to establish the SOS Talents Foundation to help young pianists.

The first inaugural concert was held in 2001 at the Marcel Dassault Hotel in Paris. Serge and Nicole Dassault became donors. Today they organize exclusive annual gala concerts for SOS Talents at their Champs-Élysées Palace in Paris.

In subsequent years, I invited many other young pianists from Georgia, including Tamar and Natia Beraia, Ana Kipiani, ShalvaGvenetadze, Barbare Tataradze, Ilia Lomtatidze and Barbare Chkhaidze.

How does your organization operate and is it difficult to raise money in this sphere?

SOS Talents is privately funded. Obviously, it is harder to raise money for a musical foundation than it is for a medical fund. Fortunately, there are still people who believe that art and music in particular, represent the highest values of our society.

It is hard to have a successful career in music. Succeeding in contests is a very important factor when you want to draw attention. However, the biggest challenge by far is grabbing the attention of high-level, professional managers in this field.

The SOS Talents Foundation serves as a springboard for many young talents and gives them the opportunity to demonstrate their talent in front of a wider audience. The foundation organizes prestigious concerts with the participation of our laureates. These concerts are often broadcast in over forty countries with the help of the Mezzo TV Company. All of this provides artists an interesting start to their careers and can be a decisive factor in their future professional life. Our foundation also helps young pianists establish the necessary contacts and find individual sponsors.

What role can business play in the world of art?

The role of business in art is enormous. Great musicians have historically sought sponsors, including Mozart, Bach, Haydn, Wagner and other geniuses.

The current approaches to this issue are rather specific. Producers are attracted to famed names. Unfortunately, however, these celebrities do not always represent the real value. The SOS Talents foundation, on the other hand, is a springboard for new names and talents.

How hard is it to gain recognition in the sphere of music and what is the road that leads to that point?

Recognition of a musician is a very subjective matter. A pianist must never cease to develop and always strive to move to a higher level. This is something that you do throughout your entire life. The life of a pianist is lonely and often cut off from reality. It is the people who surround the pianist and their values that matter most. An artist must be able to accept criticism, which is essential in their development. The ability to doubt yourself and accept advice is one of the most important factors for success.

You have visited Georgia on a number of occasions. How do you assess the situation in terms of music?

On my first visit to Georgia, I was amazed to see how big of a role art played in the lives of people here. Georgians have a good perception of music and I was very impressed by the Georgian folk music and dances.

In view of the current globalization process, culture and identity play an important role – especially in small countries – and Georgia has a very good position in this regard. Without a doubt, Georgians have a great passion for life and a strong sense of aesthetics, which has always served as an inspiration to artists. 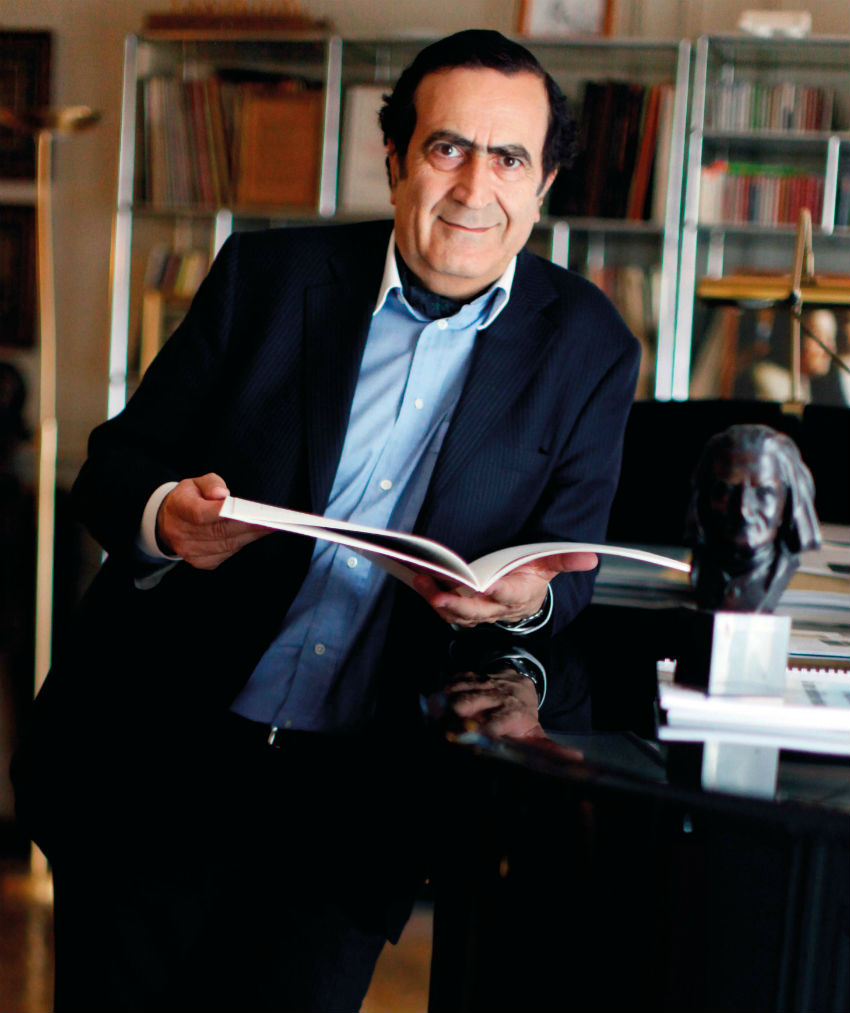