One of the most important policy questions for any government is how to build institutional integrity. How can a government eliminate corruption and make public institutions more trustworthy? There are different concepts in both theory and practice that can be used to address this question. However, I will examine the definition of integrity developed by Nikolas Kirby in relation to Georgia’s Revenue Service. Two types of public integrity can be identified: the ‘institution-first’ approach, and ‘public officer’ integrity. The first is defined as “the robust disposition of a public institution to legitimately pursue its legitimate purpose to the best of its abilities, consistent with its commitment.” The second dimension is public officer integrity, which is “the robust disposition of the public officer in the course of her public duties to pursue the integrity of her institution to the best of her abilities.” For the purposes of this article I will explore only the ‘institutionfirst’ concept of integrity.

PURPOSE OF THE REVENUE SERVICE

Edmund Burke, emphasized that “revenue is the chief preoccupation of the state. Say more, it is the state.” Furthermore, “a tax institution achieves its main purpose when it raises revenue effectively and equitably for the state’s necessary or legitimate activities and functions. Tax institutions have one “obligatory purpose” and that is to raise revenue effectively and equitably.” To these ends, the Revenue Service is constituted under the Ministry of Finance of Georgia. According to charter number 303, article 2, (b), one of the key objectives of the Revenue Service is the collection of revenue.

The taxpayer does not like to pay taxes but as Benjamin Franklin once observed, “in this world, nothing can be said to be certain, except death and taxes.” Democratically elected government and its tax administration can have a purpose of tax collection in order to provide public goods. Before changes to Georgia’s constitution in 2010, the government had the flexibility to raise taxes and modify the tax structure without a referendum. Georgia’s constitution requires this. Furthermore, article 94 of the constitution stipulates that “taxes and fees shall be paid in the amount and under the procedure determined by law. Only law shall determine the structure of taxes and fees and the procedure for introduction thereof. Exemption from taxes shall be permitted only by law.” In general, such strict regulation and minimized discretion of government could increase the public trust toward tax administration. However, it could be problematic for the government to address economic shocks, and balance a high budget deficit in a timely and effective manner.

THE PURSUIT OF PURPOSE OF THE REVENUE SERVICE

Any tax administration has limited human and financial resources, which are critical for the effective collection of revenue. There are only so many well-trained civil servants and tax inspectors – especially in developing countries.

The government of Georgia established the finance academy of the ministry of finance to train civil servants on the job, as the tax legislation is complex and requires special knowledge. The Netherlands, Austria, and Singapore have similar training centers. While these initiatives have been important, tax administrations still face the problem of highly qualified civil servants moving to the private sector rather than remaining in public service. This ‘leakage’ of highly trained tax specialists to the private sector diminishes the resources at the disposal of tax administrations.

The simplification of tax legislation is important to the legitimate pursuit of purpose. The complex tax system and vague tax provisions created a preferable regime for fraudulent and corrupt transactions. Thus, a simplification of the tax code of Georgia and the elimination of ambiguous norms surrounding tax rules enabled the Revenue Service to achieve its core objectives in legitimate ways.

Hundreds of changes were made to the tax legislation. These were necessary to mitigate the risks associated with corruption and to rebuild public trust toward the tax authority. However, frequent changes to the tax law created uncertainty and concerns. The biggest achievement was the consultation process held between the tax institution and stakeholders in order to discuss the legislative changes, however this process was not always transparent and comprehensive.

The design and implementation of tax legislation poses challenges for administrations attempting to create conditions of tax certainty. For example, a report by the OECD and IMF in March 2017 suggests that “the major source of tax uncertainty is complex and poorly drafted tax legislation and the frequency of legislative changes.”

COMMITMENT OF THE TAX AUTHORITY

The advance ruling is legally binding for the tax administration and the taxpayer. The aim of the regulation is to promote clarity and consistency regarding the application of the tax law and commit the Revenue Service to act according to the ruling. A taxpayer can submit the application to the Revenue Service asking for the interpretation of a particular taxable transaction. After introducing such rulings, the tax administration is obliged to follow its interpretation.

As noted by the IMF in 2016, the advantages of a private tax ruling are the “promotion of clarity and consistency regarding the application of the tax law for both taxpayers and the tax authority.” Increased certainty around the tax treatment of transactions also raises taxpayer confidence in the tax system.

There are, however, arguments against a private ruling practice. The disadvantages of a private ruling practice could include: “risk of base erosion where [the] incorrect or inappropriate rulings are issued or published.” If the incorrect ruling is issued, it could decrease revenue. However, the revenue risk is limited, because the tax ruling is confined to the taxpayer to whom it was issued. In addition, the advance ruling system may help the tax authority to identify potential structural weaknesses in the tax legislation.

IT-based risk assessment was introduced in Georgia’s Revenue Service in order to create a more robust tax system. Before introducing this mechanism, tax inspections were conducted manually. Then, the selection of companies for assessment was based on the tax inspector’s preferences. The risk assessment system (software) was therefore developed based on a number of objective parameters, such as profit margin, average salaries of employees, changes in revenue and profit and so on. This system helps to increase tax certainty, as there is a low risk of taxpayers being selected based on individual interests. Furthermore, the system is effective in terms of tax collection. It selects companies based on risk level. At the initial stage, 80–90 percent of all tax audits were conducted based on the IT system. Nowadays all audits are triggered electronically.

It was demonstrated that the improvement of all components of institutional integrity, such as legitimate purpose, legitimate pursuit, commitment and robustness, lead to improvements in the tax system and improved public trust towards the tax administration. 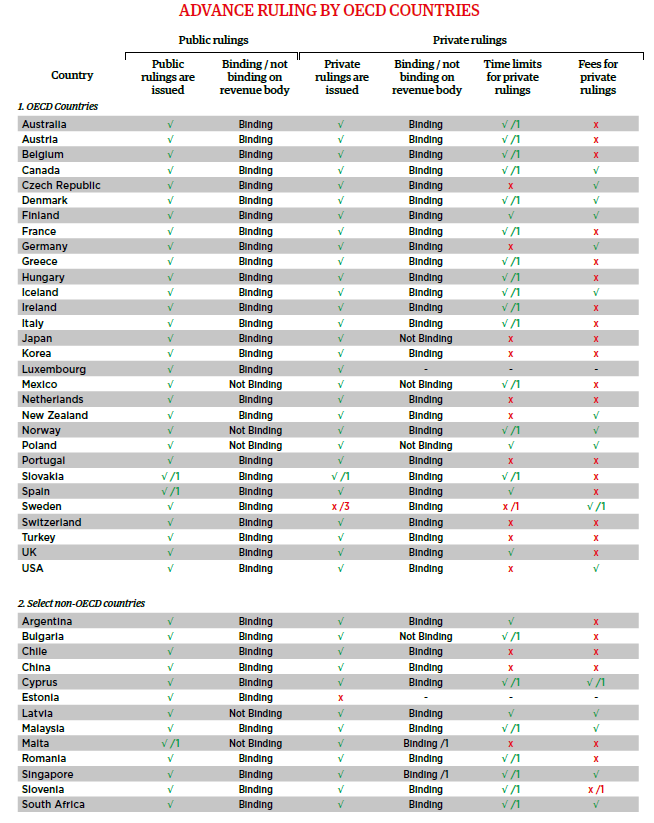