Katya Soldak is a New-York-based journalist and the editorial director of Forbes Media’s international editions. Her strongest focuses are Eastern Europe and anything related to Post-Soviet territory. 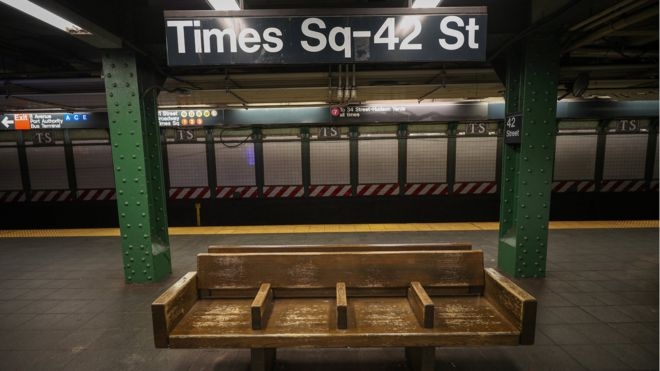 As I walk through Brooklyn Bridge Park, gazing at the magnificent Manhattan skyline on the East River, at first glance it looks as crowded as it usually does. However, if you look closer, it’s not your typical mixture of tourists with their cacophony of foreign languages, photographers with tripods, or teenagers on skateboards. The park is filled with lone joggers, parents in yoga pants pushing double strollers and carefully guarding kids on scooters. No one plays volleyball in the sand by the river. No one picnics in the barbecue area. Everyone keeps a friendly and polite distance, some people wear face masks. And yet, it doesn’t really look like social distancing or the lockdown that it is ordered by the mayor and the governor of New York in an effort to contain the spread of the Coronavirus.

That peaceful picture of joggers and children playing shouldn’t fool anyone. The five boroughs of New York City – Brooklyn, Queens, Manhattan, Staten Island, and the Bronx  — are hit hard by the rapidly spreading Coronavirus. With the death toll rising – 678 patients had died in overcrowded New York City hospitals by March 28, and the number of cases in New York state has surpassed 53,000; the five boroughs of New York have become the epicenter of the pandemic.

The healthcare system is overwhelmed. I spoke with four medical professionals in the city and they all confirm the disturbing reality that is in the news. The hospitals don’t have enough protective gear, single-use masks have been reused, hospitals do not have enough beds and ventilators. Medical personnel intubates patients non-stop, assisting them with breathing. The city hospitals have set up makeshift tents to triage COVID-19 patients as well as to act as morgues. The government’s delayed response to the virus’s spread is costing many, many lives.

One thing that is striking about New Yorkers – my home of seventeen years – is how people come together and support each other. After the terrorist attack on September 11, 2001; during the power outage in 2003, when the entire city went dark for hours; and after the devastating hurricane Sandy in 2012.

On the day when Donald Trump was elected president in 2016, New Yorkers, predominantly liberal democrats, were especially sensitive with each other, calmly sharing their sadness and expressing worry for the future of their country. Today, when schools, non-essential stores, bars and restaurants are closed, and many people are isolating and trying to follow social distancing guidelines, members of communities come together to help each other: buying food for older neighbors, helping with disinfecting door knobs and elevator buttons. Mental health professionals volunteer their services to the anxious and scared. At grocery stores and pharmacies, only a few people are allowed in at a time, people are waiting outside, standing about two meters apart, and the doormen pour out hand sanitizer into people’s palms.

Besides solidarity and respect, there is also fear and anxiety. Service and food industry workers are out of work, facing months of hardships. According to the New York State Labor Department, during the first days of the lockdown, in some parts of the state, there was a 1,000% increase in unemployment claims as 1.7 million people called to file for benefits. Well over a million children from financially strained families relied on school lunches, and those are now provided at meal sites. But that also means the disparity in incomes in New York has been underscored by the COVID 19 impact, and the inequality between the haves and have-nots will continue to be exposed.

Forbes headquarters in New Jersey has been working remotely since the first week of March. We quickly re-organized: the entire company of 400 people has migrated into a virtual workplace, with a highly mobilized virtual newsroom. Besides holding daily meetings and video calls, our teams get together for virtual hangouts to keep each other’s spirits up.

The city authorities were slow to respond to the COVID-19 spread. For weeks, when it was clear the crisis was imminent, eight million New Yorkers commuted in crowded subways, went to crowded restaurants and bars, and also traveled to and from crowded international airports, breathing in each other’s air.
In the absence of the pandemic team, fired by Trump in 2018, the federal government’s response was slow to respond to the disaster. The Trump administration failed to prevent this crisis underestimating the danger of COVID-19: “We have it totally under control,” he said in January when the virus was already spreading. “It’s one person coming in from China, and we have it under control.” The government failed to test people in a timely manner. In New York,  Mayor Bill De Blasio and Governor Andrew Cuomo stepped in and tried to help the hospitals secure supplies and additional testing stations. They are still trying.

Meanwhile, the city is contemplating closing parks and other public places. Maybe even prohibiting people from leaving their homes, or perhaps prohibiting them from leaving New York itself. For the next few weeks, the Big Apple will stay confined indoors. Stay home, don’t spread, save lives.