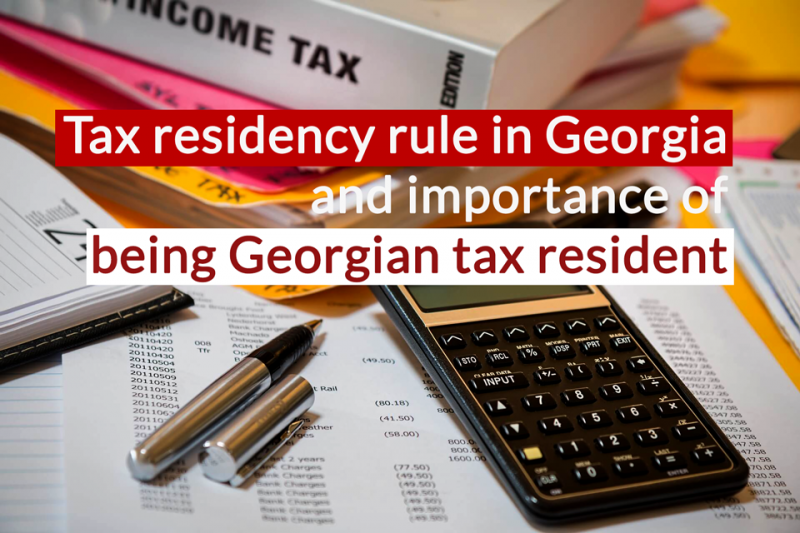 Georgia offers highly beneficial taxation system to individuals and legal entities. The non-exhaustive list of Georgia’s tax incentives is given below:

Many entrepreneurs (mostly foreign ones doing business in Georgia or others who plan to relocate here) wrongly think that they cannot enjoy the above-listed tax benefits in Georgia without becoming its tax residents. It is not true. For example, an individual can enjoy 1% taxation in Georgia even without being a resident, but the individual must meet all other required criteria. However, Georgian tax residency is still critical to enjoy low taxation worldwide and not only in one country (Georgia).

In this article, I briefly explain the right interpretation of Georgia’s tax residency rule and additional benefits it can provide to legal entities and individuals. I mostly focus on individual entrepreneurs.

Why is tax residency important?

The most important benefit of becoming Georgia’s tax resident and refusing residency in other jurisdiction is to prevent yourself from being taxed in other countries due to tax residency or withholding taxation at source.

How it actually works:

Let us assume that a German citizen Mr. Simon, providing IT services mostly to EU-based companies, arrives in Georgia and registers as a “small business entrepreneur (1% taxation).’’ He issues invoices as a Georgian taxpayer and is subject to only 1% taxation rate.

Mr. Simon can enjoy as low taxation as 1% even without becoming a tax resident in Georgia, however, to avoid being taxed also in other countries, he should make sure that he is no longer a resident in Germany or any other country, otherwise, with 1% in Georgia, his worldwide income (including income invoiced from Georgia) might be taxed in a country where he is a tax resident.

Besides, client companies might have to deduct a withholding tax when transferring a service fee to Mr. Simon’s Georgian bank accounts (taxation at source).

If Mr. Simon becomes Georgia’s tax resident, he will be able to prevent himself from taxation at source in other countries by application of international tax treaties signed by Georgia (it signed tax treaties with 56 countries including most (if not all) EU states). In addition, if he refuses residency in any other jurisdiction, his only personal income tax expense will be 1% of the revenue.

Note: This instance is just illustrative and assumes that remuneration of the service provided by Mr. Simon from Georgia to other countries is taxable at source abroad, which might not always be a case.

In brief, becoming a tax resident in Georgia provides an opportunity to individuals to enjoy tax exemptions/incentives also in other jurisdictions and save tax expenses globally.

Companies become Georgia’s tax residents automatically after registration, however they might be considered as tax residents of another jurisdiction(s) (despite the registration in Georgia). It might be a reason for parallel taxation in other country. This topic is given in more details below.

Georgia provides two definitions of a “tax resident” individuals and legal entities. One definition is provided by Georgia’s tax code, while the other one is available in international tax treaties signed by Georgia. The latter one is applied in case of dual residency. It is discussed below.

Importantly, we should always start with analyzing the definition by Georgian’s tax code. The general rule of the tax residency provided in the article 34 of Georgia’s tax code is as follows:

“A Georgian resident for the entire current tax year shall be a natural person who has actually stayed in the territory of Georgia for 183 or more days in any continuous 12-calendar-month period ending in that tax year… The day of actual stay in the territory of Georgia shall be the day, during which a natural person stayed in Georgia irrespective of the length of the stay”.

The vital aspects of this definition (highlighted above) are:

“Entire current tax year:” If for one day of a calendar year a person meets criteria provided by the definition above, he/she is considered as a tax resident for all calendar year long. So, one-day residency equals to residency for an entire calendar year;

“Irrespective of the length of the stay:” Spending five minutes in Georgia’ territory is equal to spending a whole day;

“Continuous 12-calendar-month:“  We do not count 183 days within a calendar year (January-December) but –  during 12 consecutive months (5th March-4th February; 10th October-9th September, etc…)[i];

Note: The law does not require the 183 days to be successive. A person can leave the country and come back, counting 183 days within 12 months will still continue.

As of the day- 28th January 2020, when Mr. Adam left the country, Adam has spent more than 183 days in last 12 consecutive calendar months (29th January 2019-28th January 2020. Notably, such calculation could be done for any other day which Mr. Adam spent in the Georgian territory, any day when a person was in Georgia can be tested in the same way).

The above criteria are not met for 31st December or any other day of the calendar year 2019. Therefore, in this example, Mr. Adam is a tax resident of Georgia only in 2020 regardless spending only 28 days in the country in that year.

The second way to become a Georgian resident is to be a “high net worth Individual”- a person who owns assets at least equal to 3 million GEL (less than $1 mln) or receives annual revenue above 200 000 GEL (approx. $65000) in each of previous three years. In addition to being a “high net worth individual”, a person also needs a residence permit in Georgia or should demonstrate a receipt of at least a 25 000-GEL income from a Georgian source in the calendar year of submitting the application for tax residency[ii].

Besides, if a person is a Georgian citizen and not a tax resident in other country he/she can apply for a tax residency certificate without any extra preconditions.

If an individual is a resident in Georgia and other country for a specific calendar year, the so called “tie breaker rule” of tax treaties decides which country should be the only tax residence state for a person.

That rule is supposed to prevent an individual from double residency, thus, double taxation, however it is not easily workable in practice (please do not rely only on application of that rule for avoidance of double residency).

The “tie-breaker” rule provided by the tax treaties is as following: (notably, the list has a hierarchical character; e.g. first is the most important criterion and next criterion is applied only if the first one is met by both countries, and other):

As I already noted, in practice it is difficult to benefit from the tie-breaker rule. Each country’s tax administration usually has unilateral effort to meet all the criteria and no one can tell them opposite until the Mutual Agreement Procedure (MAP[iii]) and/or arbitration takes place between the two tax administrations. Besides, the MAP initiation is technically hard, especially for small and medium businesses and even if Mutual Agreement Procedure is initiated, it could take several years. There is still no guaranty of successful results.

Georgia has not developed the MAP procedures thus far; so legally it works here, technically – not.

So, based on my 7-8-year experience as a Georgian tax inspector, I would advise you not to completely rely on the “tie-breaker rule” to avoid the double residency. It is more reliable to first try to avoid being resident in other jurisdictions. For example, if another country also has the 183-day criterion for becoming a tax resident, avoid spending so long there. In this way, you are a tax resident only in Georgia and application of “tie-breaker rule” is not needed.

The Georgian tax code provides the definition of a “resident company” which is the same as the “Georgian enterprise”.

Resident – a resident natural or legal person (a Georgian enterprise or a Georgian organization)”.

Therefore, a legal entity is a Georgian tax resident, if it is registered OR has a place of management in Georgia. Meeting any of those two criteria qualifies a company as a Georgian resident.

Note that if you live in Georgia and own and manage the so called “letter box” company registered abroad, under the Georgian tax law, this company can be qualified as a Georgian resident and be taxed accordingly. On the contrary, if a company registered in Georgia is a “letter box” firm and is managed from abroad, this company is still a Georgian tax resident (registration criteria). Besides, the company can also be qualified a resident in another jurisdiction (management criteria) simultaneously.  In this case, tax treaties usually give priority to the country where the place of effective management is located. However, tax treaty is not fully reliable also in this case, similarly to application of “tie-breaker rule” for individuals.

Have in mind that the above-mentioned issue (dual residency of a company) is a problem but should not be an obstacle for doing business in Georgia smoothly if you are consulted by a qualified Georgian tax professional before setting up a business structure.

As I have noted above, you will hardly be protected from double residency by tax treaty if the tax laws of two (or more) countries say that you are a dual tax resident. Too many procedures and less chance of having an acceptable result in time. More efficient way is to avoid being a tax resident of another jurisdiction.

Tax treaties are not highly effective for avoiding dual residency, however, they effectively protect Georgian tax residents from taxation at source in other jurisdictions and vice versa.

To continue the given example of Mr. Simon, if he becomes a resident of Georgia, he can request a residency certificate via www.RS.GE and provide it to the non-resident clients.

As a result, the clients should apply Article 7 (business profit) of a tax treaty, according to which no taxation at source should take place and the income/profit shall be taxed only in a country of residence (Georgia).

As we see, the application of a tax treaty shall exempt the foreigner clients from any withholding tax on payments to Mr. Simon. Thus, Mr. Simon will receive full amount of his service fee (without deductions) and pay only 1% tax in Georgia.

Note: The example has only illustrative purposes. The proper application of a tax treaty needs individual analysis by Georgian and international tax expert for potential misinterpretation to be avoided.

Georgia’s tax residency is not as simple to be defined as it seems at first sight. Even if you properly understand this rule, you should know why being a tax resident in Georgia is important and what procedures need to be performed to minimize taxes globally by becoming a Georgian tax resident.

The article provided a brief explanation of Georgia’s tax residency and its importance. It can provide the readers with general understanding of the issue. When it comes to the practice, individual analyzes are required as each case might include tricky details.

About the author: Gela Barshovi is international and Georgian tax adviser and managing partner of an audit/consulting firm TPsolution. For the tax consultation and/or questions regarding the article, you can contact him at gela.barshovi@tpsolution.ge

[i] That approach is adapted at Georgia Revenue Service as of today.

[ii] The rule is applicable as of today but might be the subject of the amendments in the near future.