The world’s attention is focused on Lebanon after the blast occurred in the Port of Beirut on August 4. Major part of the city, with a population of 6.3 million, is destroyed and in the wake of a new wave of protests, Hassan Diab’s government has resigned. Early elections are scheduled in the country.

Today, Lebanon is in the most difficult political, social and economic crisis. Several months earlier before August 4, the country turned into default and the country’s banking sector collapsed during the same period, which had been followed by local currency devaluation and loss of citizen-owned deposits.

Lebanon is in the political instability for many years, state institutions are dismantled and corruption is rampant. Even trivial issues in Lebanon, including disposal of household waste, have been the reason of an unresolved crisis for the government for years, leaving tens of meters of rubbish mountains in the center of Beirut.

Amid the dysfunction of waste management and environmental systems, 2750 tonnes of ammonium nitrate was stored at Beirut port for six years in violation of safety standards, leading to a powerful explosion by August 4.

The port of Beirut had been one of the main arteries of the Lebanese economy, accounting for more than 60% of the country’s foreign trade. The port is wholly state-owned and is operated by a state-owned company.

In 2019, the Port of Beirut transported 6 million tons of cargo, with a financial revenue of $ 210 million.

The Port of Beirut has several terminals, including container, dry and bulk cargo, as well as oil depots.

The blast took place at “Warehouse 12”, where detained ship Rhosus’s cargo of 2,750 tonnes ammonium nitrate was stored by the decision of the lawyer.

This fact should have been even more significant in the light of the fact that the Prime Minister of Israel, Benjamin Netanyahu, during his speech at the UN General Assembly in 2018, said that one of Lebanon’s ruling political parties and pro-Iranian paramilitary organization Hezbollah was engaged in the production of guided missiles in various areas, including the port of Beirut.

Lebanese officials deny the Israeli allegations and rule out Lebanon’s connection to the production of illegal weapons.

On September 23, Moldovan-flagged cargo ship, the MV Rhosus left Batumi Port and moved in the direction of city Beira, Mozambique. It carried ammonium nitrate of 2750 tons.

The MV Rhosus was owned by the offshore company Teto Shipping Ltd. The company was owned by Russian businessman Igor Grechushkin, who had Cyprus citizenship.

Grechushkin founded Teto Shipping Ltd in 2012 and it existed until 2014. The reason for the company’s bankruptcy was to avoid fines and liabilities caused by the legal disputes originated in Lebanon.

The Ship’s former captain, Boris Prokoshev told the New York Times, that the reason for the MV Rhosus stopping at the port of Beirut was that the ship did not have the money to cross the Suez Canal, so it was decided to enter the port of Beirut to find new cargo.

During the inspection of the ship in the port of Beirut, naval officials found that the hull of the ship was damaged and it was not allowed to swim.

Rhosus was not allowed to leave the port of Beirut. The ship’s crew consisted of 9 sailors, of which 8 were citizens of Ukraine and one was a citizen of Russia. With the help of Ukrainian diplomats, 5 members of the ship’s crew left for their homeland, while the captain, chief engineer, assistant engineer and Botsman remained on the Rhosus.

After the detention, the owner company of the ship declared itself bankrupt and abandoned the ship, crew and cargo. The captain of the ship sold the fuel needed to travel to Mozambique and hired lawyers with that money. Finally, on February 4, 2014, the ship-owner was ordered to pay a $ 100,000 fine and the crew was allowed to leave Rhosus.

Ammonium nitrate of 2,750 tons was transported to the “Warehouse12”, while the 86-meter-long and 12-meter-wide ship was placed 300 meters away from the same warehouse in the port area.

According to Aljazeera, the confiscated cargo was the subject of discussion among the representatives of the Lebanese state. The Lebanese customs department was considering exporting the seized goods at various times, as well as handing them over to its country army or selling them to Lebanese companies producing explosives.

Rhosus, built in 1986, was in deplorable technical condition even before its arrest, after a few years spent without a crew, cracks in its construction widened and in February 2018 it sank. As a result of the sinking, it narrowed and polluted the Beirut berth area.

Two and a half years after the sinking of the Rhosus, improper storage and handling of the ship’s cargo, as well as external factors, led to explosion of 2750 tonnes of ammonium nitrate, killing more than 220 people. 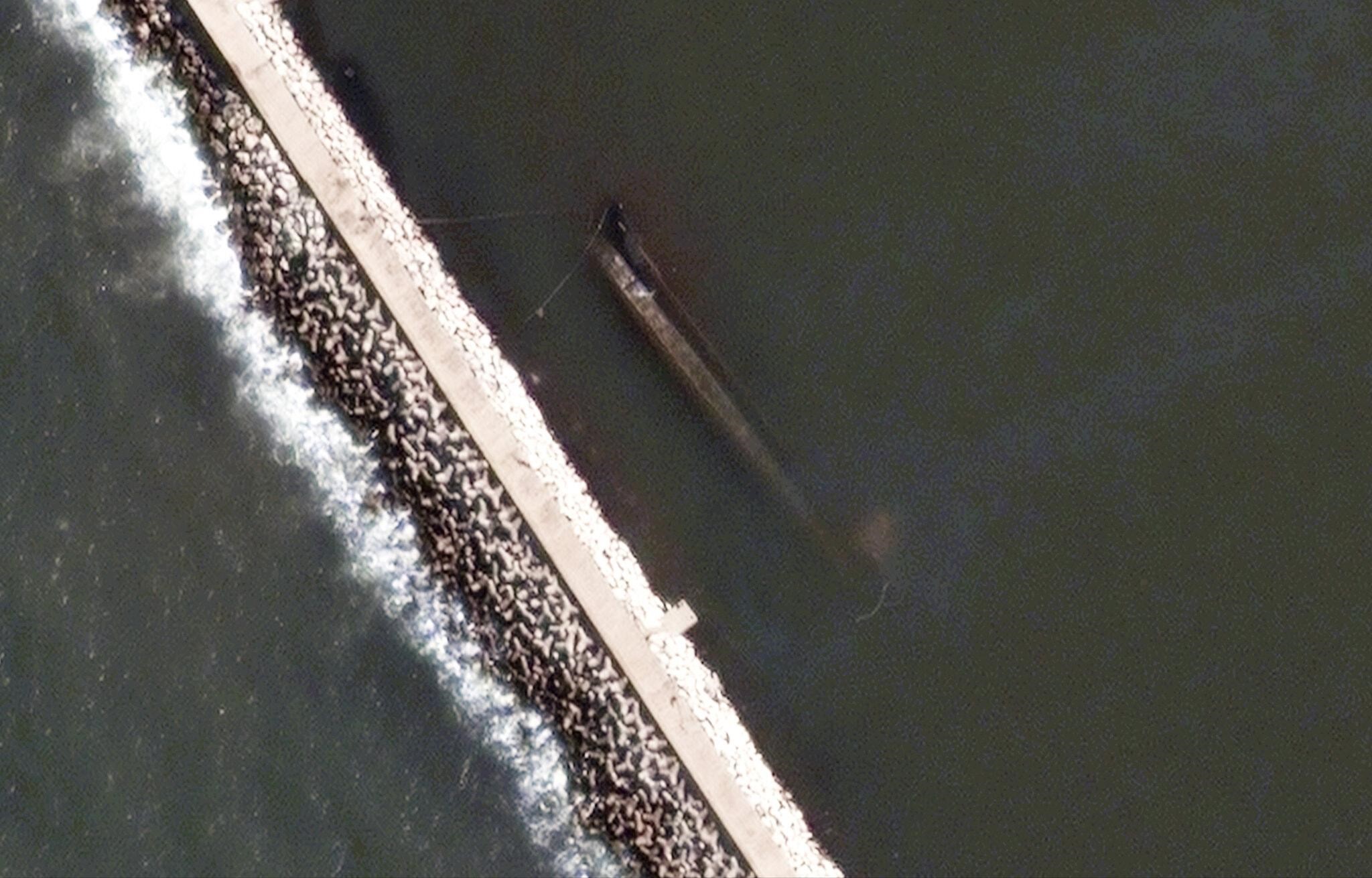 About safety standards for ammonium nitrate.

Nitrogen fertilizers are one of the main export commodity of Georgia. In 2019, the product ranked as 8th in the top ten of export products and its export amounted to $ 95 million. In total, up to 500,000 tons of ammonium nitrate were exported from Georgia. The main producer of the product in the country is JSC Rustavi Azot.

JSC Rustavi Azot released a statement related to the explosion in Beirut. According to it, Rustavi chemical plant was operated by other legal entity (identification code # 416293709) in 2013, when Teto Shipping Ltd was transporting ammonium nitrate to Mozambique. Respectively, JSC Rustavi Azot with identification code # 404519794, does not have information whether exact product has been produced in Georgia or not.

“Due to the fact that JSC Rustavi Azot (identification code # 404519794) is operating the plant for the last 3 years, we are deprived of the opportunity to get information if the ammonium nitrate exploded in Beirut has been really produced in Georgia, namely in Rustavi”, – the company’s statement reads.

BMG asked JSC Rustavi Azot what standards are required for the safe storage and transportation of ammonium nitrate.

It becomes clear from the company’s response that the sustainability of this product depends on compliance with a number of requirements from the holder and the carrier, including proper ventilation, temperature conditions, low relative humidity, and many other factors. As it turns out, concentration of ammonium nitrate in the air should not exceed 10 milligrams per cubic meter at the warehouse, where it is kept, respectively it requires proper ventilation and moreover, this product should be stored separately from other products.

JSC Rustavi Azot explains that ammonium nitrate belongs to the category of dangerous goods, so each batch of the product is accompanied by a relevant safety passport, which specifies the rules of its treatment and the product’s risks, methods of their elimination and all other comprehensive information. Products made in Georgia are also exported to the EU countries, therefore, JSC Rustavi Azot has EU security passport, issued by the relevant EU body, which is updated annually.

“Our products are exported to the EU countries and it is necessary to register them in the EU, which is done by us and we have assigned the code -2 01-2119490981-27-0078, respectively the safety passport is issued by the registration authority, which is updated annually. It represents one of the main regulatory documents for the production and safe storage of ammonium nitrate, in addition, all packaged units are labeled in accordance with EC №1272 / 2008 – Regulation. The label contains all the necessary information on the safe transportation, storage and handling of ammonium nitrate,” the company said in a statement.

The manufacturer guarantees compliance with the requirements of the current standard for ammonium nitrate, if the conditions of transportation and storage are observed, the warranty period for storage of ammonium nitrate is 6 months.

As mentioned above, the stability of ammonium nitrate significantly depends on the environmental conditions and storage duration. If the relative humidity and ambient temperature requirements exceed the established limits, then the decomposition of this product proceeds at a higher rate. Given these factors, it is unknown how relative humidity and storage temperature conditions were maintained at the port of Beirut, where summer temperatures often exceed 40° C.

“Due to temperature dependence, ammonium nitrate is characterized by the transition from one modification to another at certain temperature intervals, which causes the granules to expand and contract and eventually disintegrate. Under certain conditions it can detonate-explode.

The reason for this is that ammonium nitrate is an oxidizer and after heating above 110 ° C begins to dissolve thermally. Along with the increasing temperature, it decomposes into ammonia and nitric acid, causing explosion, which is described in Chapter 2 of GOST 2-1013 in Georgia. This standard is an interstate standard and is recognized by ISO / IEC. “- the statement provided by JSC Rustavi Azot reads.