The Georgian population regards unemployment as the gravest problem facing the country today. Around 60% of Georgians consider themselves unemployed. On the other hand, the National Statistics Office of Georgia (GeoStat) puts the unemployment figure at 12.7%. People clearly perceive themselves as unemployed far more easily than is determined by GeoStat’s official methodology.

The aforementioned organization’s methodology considers a person aged 15 years or above as unemployed if they have not worked (even for one hour) for seven days prior to being surveyed and have been actively seeking employment for at least one month. Consequently, people working in agriculture, private tutors, taxi drivers, independent salespeople and others who have worked for at least one hour during the seven days prior to being surveyed for the purpose of obtaining income (salary, natural income and profit) are employed.

In another possible scenario, someone who has not worked at all for the previous week may still not be considered unemployed if they are not actively seeking work. People who stay at home and wait for someone to hire them, or those who have savings and do not wish to work, do not fall under the unemployed category.

Consequently, approximately 600 out of the 1,000 surveyed individuals state that they are unemployed, while the ‘GeoStat’ data would only consider 127 of them to be out of work.

As of 2018, there were 3.7 million people living in Georgia, of whom approximately 3 million were aged 15 or above. There were 1.7 million people in employment, while 246,000 were unemployed, leaving more than one million people of working age (15 or above) who were neither working nor unemployed. The latter category includes people who were unable to perform work on health grounds or for other reasons (for example, due to being incarcerated), or who were not seeking to find a job. This includes half a million people who were either aged 15-19 or had reached the pension age and were, therefore, not interested in finding work. The remaining half a million either stayed at home doing family / housework or had lost hope of ever finding employment and so had stopped looking for work.

Let us now turn to the 1.7 million employed people. These include two distinct categories of individuals: those in formal employment and those who are self-employed. It is precisely the latter group that includes people who claim to be unemployed. As of 2018, there were 860,000 hired employees who received a salary, while 833,000 did not have a regular job but were working individually, therefore, regarded as self-employed. The latter category includes the people working in agriculture, private tutors, taxi drivers, independent salespeople and so on. Some of these individuals are trying to obtain income through various means before they can find the job that they want. Resultantly, when new jobs are created in Georgia, they are not necessarily taken up by people who are officially unemployed. In theory, these new positions can be filled by the self-employed, which would mean that unemployment numbers would not reduce. 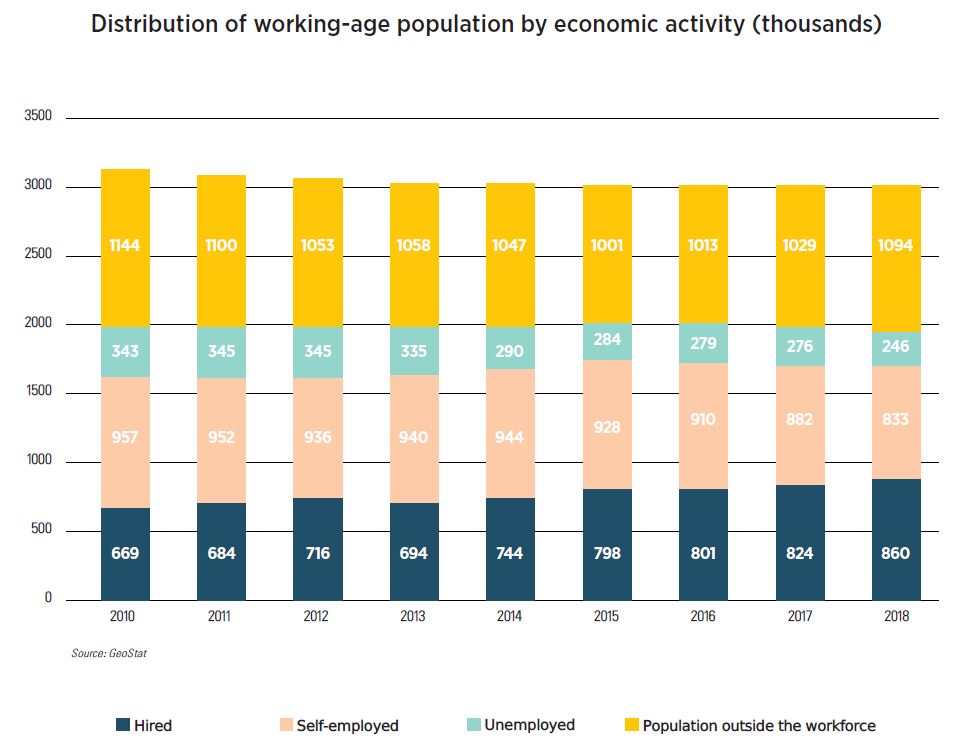 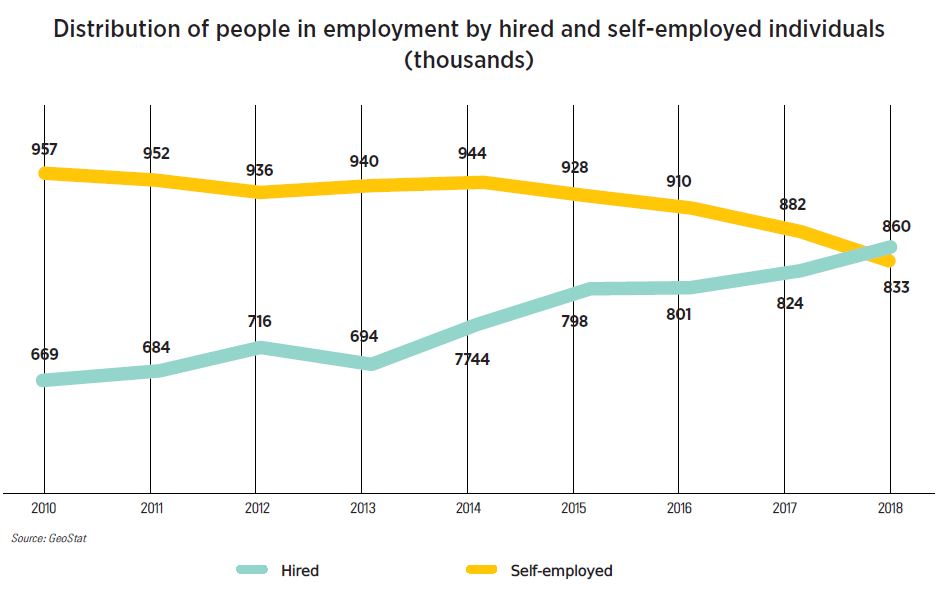 If we were to translate the official GeoStat statistics into an average Georgian person’s perception, we would conclude that there are approximately 1.5 million people looking for a job in this country. In 2014-2018, the number of people in work grew by an average of 33,000 per year, and therein lies the problem:at this rate, it would take 45 years to employ 1.5 million people.

The Georgian labor market is one of the most liberal in the world: there is no minimum wage, hiring people is easy, there are no unemployment benefits, and while the upper limit of working hours exists, it is rarely enforced. These circumstances have been the subject of frequent criticism from human rights organizations, but from a purely economic point of view, and with regards to improving employment figures, having a labor market free of regulations is preferable. For many European countries, liberalization of the labor market is a way to tackle unemployment. In Georgia, any further liberalization is virtually impossible and would have no significant effect on unemployment figures.

There are two major causes of unemployment in Georgia: a small economy and an insufficiently qualified workforce. There are currently not enough adequately well-paid jobs in Georgia to satisfy the demand. Consequently, the only way to reduce unemployment levels in the short or medium term is to grow the economy and create new jobs. The low quality of middle and higher education in Georgia creates a shortage of medium and highly qualified staff. Hundreds of thousands of unemployed people do not have enough knowledge or qualification to fill specific vacancies.

The government cannot solve the unemployment problem by hiring more people in the public sector, as this will only lead to increased bureaucratic costs and a higher burden on the economy. This means that people in the private sector will lose their jobs on the back of an increase in public sector employment.

Whether consciously or not, politicians promising to reduce unemployment are in effect promising to achieve high economic growth over the next few years. Although the problem of unemployment cannot be resolved completely, it can be substantially reduced, though not immediately, and not in one or two years. Even in some of the world’s richest countries, such as Japan, Singapore and Germany, 2-3% of the population are unemployed. These are usually people who are looking for a better-paid job or a job that is better suited to their profession.

We must also remember that technological progress slows the process of tackling unemployment to a certain extent. Manual work is increasingly being replaced by computers and other technological solutions. For example, the cash deposit machines have eliminated the need for thousands of cashiers and tellers. Large factories no longer require tens of thousands of employees either. Creation of new technologies creates jobs, but this only happens in countries that produce, rather than consume modern technology.

In terms of work productivity, the situation is as follows: in 2010, an employee created 12,700 GEL in added value for the Georgian economy, while in 2018 this figure grew to 17,500 GEL (not including the effect of inflation). This means that work productivity increased by 38%. Had it not increased at all, then the Georgian economy would have required 38% more employees in 2018 than in 2010; in reality, it only needed 4.1% more. Discounting the self-employed, we see that the number of hired employees increased by 29% during the same period, meaning that the new jobs required certain qualifications and knowledge, reducing demand for self-employed individuals. 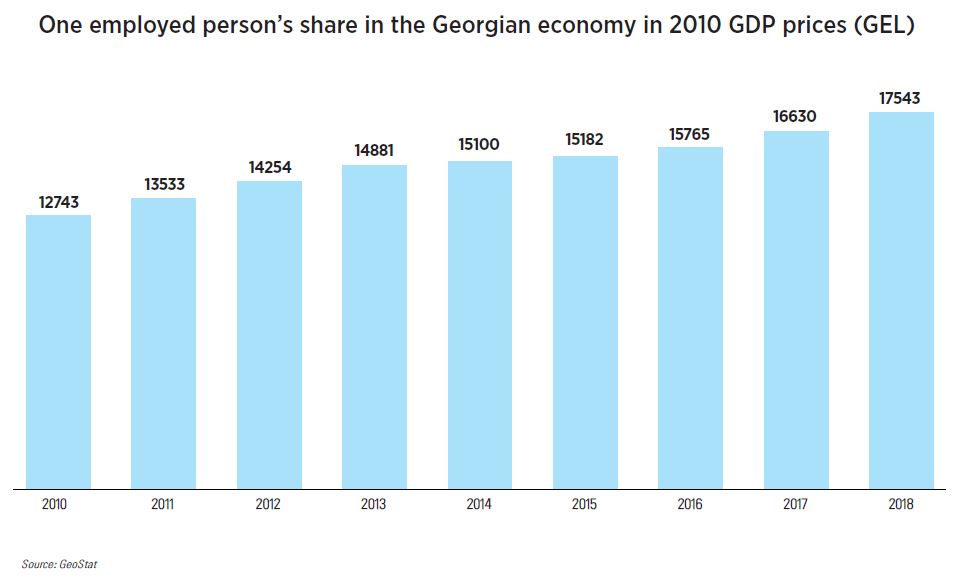 In 2018, the growth of one hired employee by one unit accounted for approximately 37,000 GEL from the country’s GDP growth. Based on this ratio, the expected 4.5% economic growth in 2019 will create approximately 36,000 new jobs, which is not an insignificant number, but bearing in mind that 1.5 million people in the country are looking for jobs, we need the number of jobs to increase at a much faster rate. We should also bear in mind the impact of technological progress and work productivity. With these factors in mind, Georgia needs its economy to grow by at least 7% in order to create 50,000 new jobs per year and achieve real visible results with regards to tackling unemployment.