WITH THE SMARTPHONE AS THE CENTERPIECE of the new global consumer economy, how we allocate our screen time between the myriad of apps that exist is becoming a very telling statistic.

After all, the companies that win the battle for app mindshare will have unfettered access to billions of consumers, as well as the economic opportunities that emerge from that access.

THE DUOPOLY VS. EVERYONE ELSE

Most know that Facebook and Google, the two tech giants that are lovingly referred to as “The Duopoly” by advertising executives, are already capturing $0.60 of every dollar spent on advertising online.

And now, through acquisitions, The Duopoly is showing that they are able to stay ubiquitous as consumers spend even more time on their smartphones.

According to recent data from Apptopia, the global app ecosystem is dominated by Facebook and Google owned apps. Together, among the top 100 apps, their products account for 54% of all screen time.

WHAT’S UP WITH WHATSAPP?

In particular, Facebook’s showing is impressive here: users spend an average of 79 minutes per day in its apps.

What’s even more interesting is that this is mainly due to the success of WhatsApp, a company that Facebook successfully acquired for $19 billion in 2014. WhatsApp has a user base well beyond 1 billion people, and in the last three months it saw 82.21 billion hours of time spent on the messaging app – more than any other.

Here are the 10 top apps, in terms of screen time, as estimated by Apptopia:

To understand the dominance of WhatsApp, keep in mind the top-viewed game over this May-July 2018 period was Clash of Clans, in which users spent 3.83 billion hours. Compared to WhatsApp’s 82 billion hours, that’s just a drop in the bucket! Facebook owns three of the top four apps, even though the company isn’t the base of any ecosystem like Google or Apple. The question it does face however, is how it will monetize WhatsApp and Messenger, each apps with over 1 billion users.

In 2017, WhatsApp was downloaded a whopping 924 million times.

Here’s how that compares to other top apps in different categories based on 2017 data:

As you can see, WhatsApp (and other social apps) blow away the competition from all other categories.

It’s something that Facebook is likely quite happy about, though for now it’s still hard to put a number on the value of WhatsApp to the mother company. 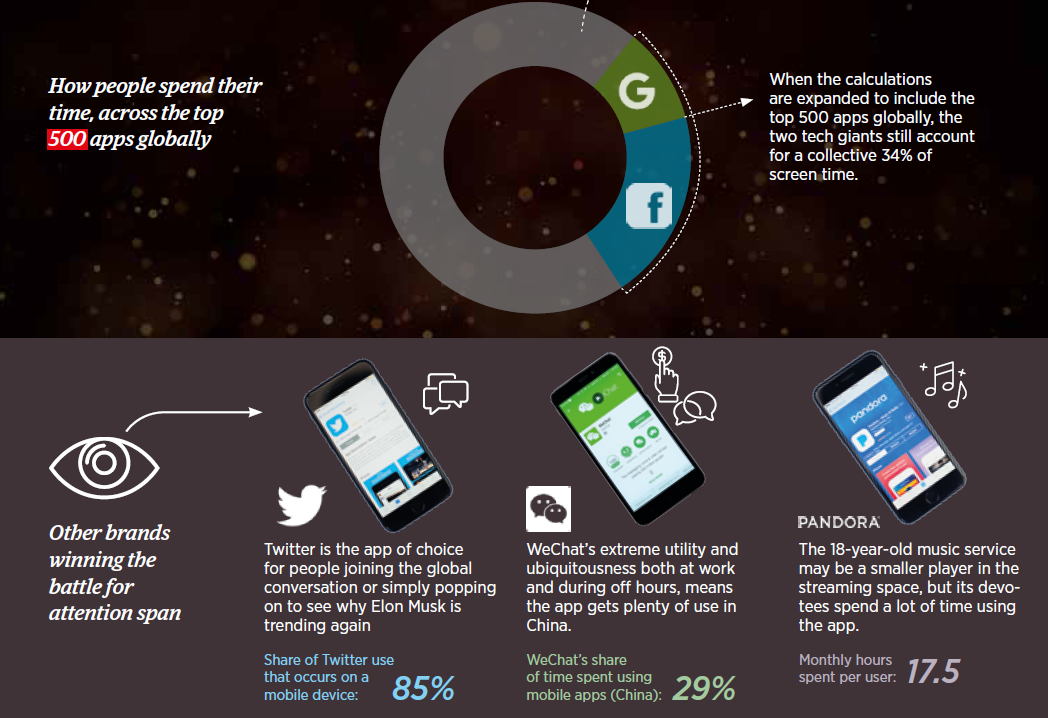