According to a study conducted by the University of California (J. Bradford-Delong 1997) after the Germany’s defeat in World War II, per capita income in Germany decreased from $6,000 to $2,500 (by approximately 60%). According to the data of the International Monetary Fund (IMF), per capita Purchasing Power Parity (PPP) in Georgia in 1991 was $5,550. By 1994, the PPP decreased to $2,466 (by 61%). In other words, the decreased PPP rate in Georgia in the 1990s was equal to the situation in post-war Germany. 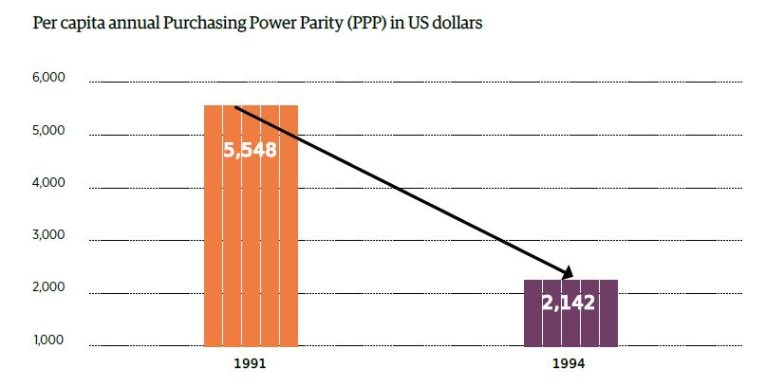 The economic catastrophe of Georgia in the 1990s was determined by a whole range of factors. It is hard to single-out the most destructive factor contributing to this situation as civil war, war over Georgia’s territorial integrity, corruption, crime, a total lack of information regarding the market economy, hyperinflation and the energy crisis all played a role.

The economic situation in Georgia started to improve beginning in 1995. GDP increased by 2.6%, while in 1996- 1997, GDP had already increased by 10.6%, which was due to the relatively stable political environment, the end of war and the monetary reforms implemented in September of 1995 when the Georgian Lari replaced the coupon. In 1995, the rate of hyperinflation decreased to 57% and in 1997, it had already come down to 7.2%. The exchange rate of the Georgian Lari against the US dollar was stable and fluctuated in the region of 1.3. By 1996- 1997, Georgian exports increased by 57%.

The Asian Financial Crisis, which began at the end of the 20th century, particularly damaged the East Asian countries, including Russia. The economic dependency ration was very high. The crisis had a major impact on Georgia. In 1998-2000, the country’s economic growth rate decreased to 2.5%. The Georgian Lari devaluated significantly and the value of the dollar exceeded two Laris. The annual inflation rate increased to 11%. 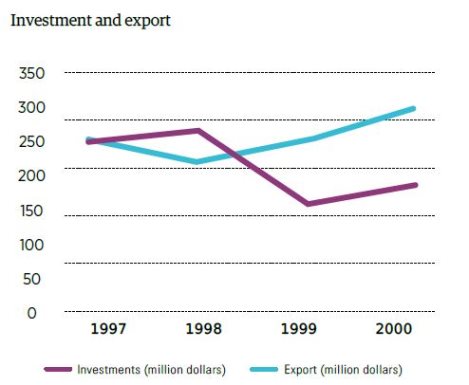 After the Asian Financial Crisis, the economic growth rate in Georgia gradually started to increase and in 2003, the economy increased by 11.2%. The high rate of economic growth in 2003 was largely prompted by the development of trade and agriculture. The construction of the Baku-Ceyhan Pipeline also had a positive impact on the economic growth of the country. Budget revenue in 2003 exceeded H1 billion, while the state debt reached H5.4 billion Laris (63% of the GDP). The positive economic trend of 2003 was not enough to thwart the Rose Revolution, whose main slogan was ‘fight against corruption’. According to 2002 Word Bank data, Georgia had the largest shadow economy in the world.

2004-2007 was a period of major reform in Georgia. During this time, the rate of crime and corruption decreased. The regulations impeding the development of business were lessened significantly. The types of taxes, as well as tax rates were significantly decreased. All of these developments were reflected in various international economic ratings. This period also coincided with the world economic boom.

In 2004, the economy of Georgia grew by 5.8%, while in 2007 the growth rate reached 12.6%. However, the inflation rate was rather high – the average annual inflation rate was in the region of 8.4%. Budget revenue increased quadrupled reaching H5 billion. The state debt decreased to H4.3 billion (26% of GDP). In 2007, Georgia had the highest rate of Foreign Direct Investment, which reached $2 billion. This record remains a record high to this day. 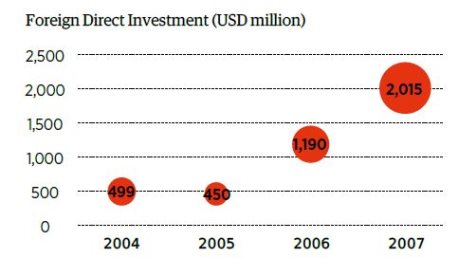 In the first half of 2008, the economy of the country grew by 10%. By the end of 2008, the entire world was gripped by the global financial crisis. The growth of the Georgian economy was delayed by the war with Russia in August. Georgia’s international partners allocated over $4 billion in assistance and low-interest credits. In 2009, FDI decreased by 58%, export by 24% and the overall economy of the country by 3.7%. The budget deficit increased and consequently state debt increased by H3 billion in two years (partly due to the devaluation of the Lari) equalling 41% of GDP. The value of the Lari against dollar dropped to 1.8. 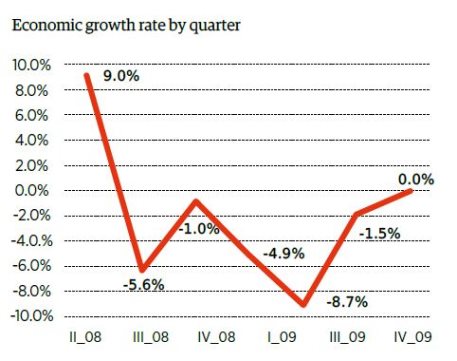 In 2010-2012, the Georgian economy grew on average by 6.6%. Foreign assistance and credits played a major role in the growth of the country’s economy. In 2010-2011, the budget deficit was rather high. The state increased the economic growth rate by deficit spending. As a result, the state debt increased by an additional H2 billion and exceeded H9 billion (however, the state debt expressed in GDP decreased by 35%). In 2011, the inflation rate was 11% and began to decrease over the following years.

The annual average growth of export was 29%. Annual FDI equalled $950 million on average. The trade, financial, hotel and restaurant sectors were developing more rapidly, while the agricultural sector declined.

2013: The impact of the change of government

In 2013, the newly-elected government began to redress the country’s economic policies and suspended some infrastructural projects. It was unclear which path of economic development the government would select. The economic growth rate decreased to 3.4%. The balance between budget revenue and expenditures broke. There was a particular decrease in infrastructural spending (from 1.5 to 1.1 billion).In 2013, the agricultural sector thrived above all other sectors, growing by 11.3% after the government handed out ‘ploughing and sowing’ vouchers. The building sector decreased most by 10%. 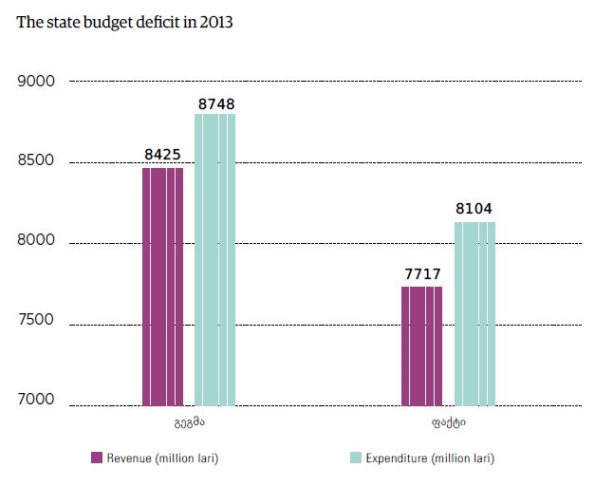 From 2014-2016, the average growth rate of the economy was 3.4%. Georgia’s exports decreased by 27%, which was mainly due to the crisis in Russia and Azerbaijan. Remittances from abroad decreased by 22%. From 2014-2016, there was a significant drop in the tourism growth rate. The reduced foreign income led to the devaluation of the national currency. The exchange rate was 2.8 Laris against the US dollar. The inflation rate in the past four years has been 3.7% on average. The state debt against GDP increased by 44%.

In 2014, the FDI stood at $1.8 billion, the highest figure in this period. In the following years, average FDI was $1.6billion.

In 2017, the economy of the country is expected to grow by 4-4.5%. This growth can mainly be attributed to the increase in exports, remittances, tourism and infrastructural development. The annual per capita PPP will exceed $10,000. 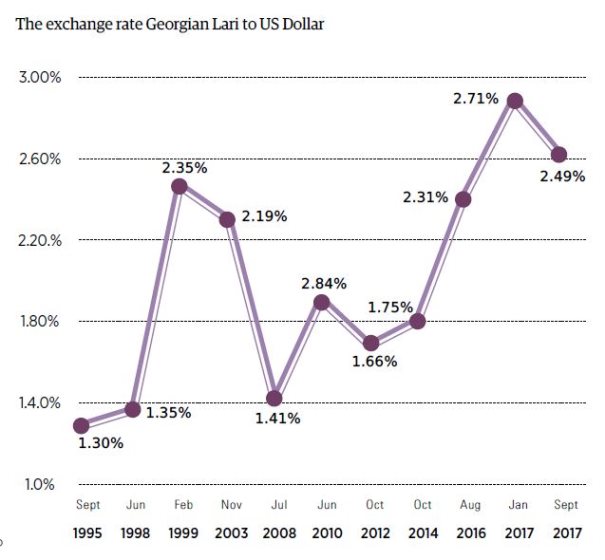