Skip to content
მთავარი
Forbes Georgia in English
The potential Impact of Sanctions Against Iran on the Flow of Goods Through Georgia
კითხვის სავარაუდო დრო 4 წუთი
Irakli Danelia
ოქტომბერი 10, 2018 at 1:21 pm

Political conjuncture has always been and remains a factor influencing economic development, or lack thereof.

This situation may change in 2019, although determining the exact form of the change requires an analysis of sectoral, macroeconomic and international factors. Due attention must be paid to the international sanctions against Iran coming into force.

Sanctions against Iran’s oil, energy and banking sectors are due to come into effect on 4 November, and will also include restrictions on the purchase of US currency by the Iranian government, sales of raw materials and car manufacturing.

In order to analyze the possible effects of renewed sanctions against Iran on the flow of goods through Georgia, we must examine the results of the aforementioned sanctions in several different categories.

Iran is the world’s fifth-largest oil exporter, and sanctions will directly affect the global oil market. During the last period of sanctions against the country, the global market lost out on 2.4 million barrels of Iranian crude oil per day. Analysts suggest that new sanctions will create an even larger hole on the market, predicting the global price of oil to easily surpass $80 per barrel, and possibly even reach the $90 mark. Restrictions on supplies of Iranian oil will lead to an increase in fuel prices. Therefore, maritime and land transportation prices, as well as port service costs, are also likely to increase in Georgia and throughout the world.

On the other hand, the international sanctions against Iran will also have an impact on the flow of goods from Far East Asia to Armenia, Azerbaijan, and, to a lesser extent, Central Asia through the Iranian port city of Bandar Abbas. This city currently a fierce rival to Poti with regard to the container transport of the aforementioned goods. For example, the transit time from major Chinese ports of Qingdao, Shanghai and Ningbo to Poti is approximately 42 days, while the transit time to Bandar Abbas is approximately 36 days. This time difference represents a major factor with regard to the speed of the turnover of money and goods. Furthermore, freight costs from major Chinese ports to

Bandar Abbas are quite low, working out to be $200-300 cheaper per container in comparison with the existing freight transportation costs to Poti. One should also consider that port and terminal costs at Bandar Abbas are considerably lower than the equivalent costs in Georgian ports.

Over the last few years, the flow of container freight to Poti Sea Port decreased in part due to the heavier use of the Bandar Abbas transport route to Armenia and Azerbaijan. However, the recent announcement of sanctions has led to a $1,000-1,200 increase in transportation costs from Bandar Abbas to Armenia and Azerbaijan per container. Subsequently, the flow of goods through Poti increased in July and August of this year. According to data for the first seven months of 2018, the total volume of freight processed at Georgian sea ports compared to the equivalent period last year was 43,200 TEU higher.

Poti Sea Port immediately took advantage of the situation and increased port service fees. Such actions are normal within the backdrop of weakening competition and a sharp increase in the use of alternative routes. However, at the initial stage, it would have been more rational to first attract a steady flow of goods, and then to gradually increase transportation costs. If sanctions against Iran remain in place until the end of 2019, the volume of total turnover of goods in Georgian ports may increase by 15-20% as a result of the restrictions on the Bandar Abbas route.

When choosing the transport corridor, the transporter, the trader, the exporter, the goods sender and/or the goods recipient take into account all the parameters that determine pricing. Bunker prices (determined by oil) in Georgian sea ports should be discussed separately. For example, the price of ship fuel is currently $790 per ton in Poti and Batumi, $810 per ton in Kulevi, but $650 per ton (18% lower) in Aktau and $500 (27% lower) in Baku. This difference in prices significantly lowers the competitive advantage of the Georgian transport corridor in comparison with rival corridors.

Nevertheless, the sanctions ensure that there will be no alternative to Poti for goods destined for Armenia and Azerbaijan, which were previously transported through Bandar Abbas. On our part, we must use this situation effectively, which would mean retaining the flow of goods through long-term contracts, in order to ensure that the lifting of sanctions will once again coincide with a significant portion of the freight reverting to the Bandar Abbas route. This requires the formation of the appropriate port and terminal service fees and the maintenance of their long-term stability. 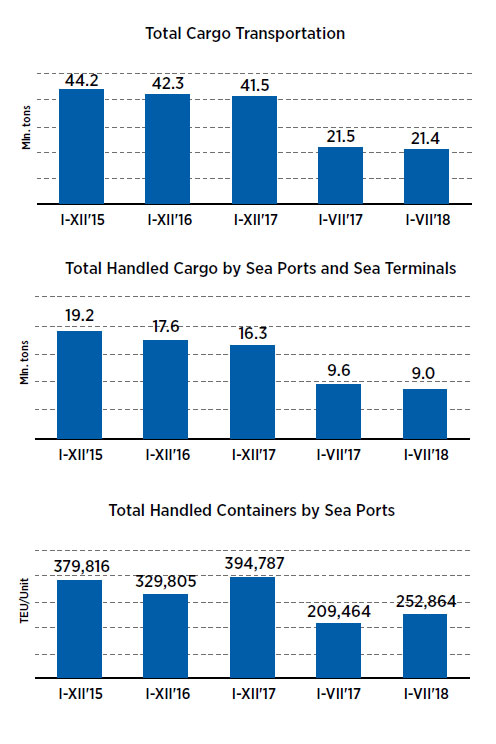