Even though Brexitis making a lot of people think twice about moving to the UK or expanding their business there, it’s arguably still the place to be if you want to make it big in European banking. Even though the UK voted to leave the EU in 2016, its bankers were still raking in millions a year later according to pay and bonus details published by the European Banking Authority earlier this year. It found that 3,567 UK-based bankers took home more than €1 million ($1.1 million) in 2017. One asset manager earned €40.9 million, of which the bonus was €38.3 million, working out at 1,220 times the median average salary of a full-time worker in the UK.

The UK boasts substantially more millionaire bankers than any other country in Europe despite Brexit tensions and Germany comes second in the ranking with “only” 390. France comes third with 233, Italy is in fourth place with 201 and Spain rounds off the top-5 with 161. If and when Brexit does finally occur, it will be interesting to see if the situation changes with both Frankfurt and Paris battling it out to become the EU’s future banking hub. The report found that growth in the UK’s millionaire banker population is continuing but it’s actually starting to lose steam, more than likely as a result of the divorce with Brussels.

In 2017, the UK’s pool of wealthy bankers did grow modestly by 38 individuals. In the EU as a whole, the number of high earners in the banking sector grew five percent in 2017 despite a cap on bonuses, which could be another contributory factor to the British slowdown. In 2014, an EU regulation went into effect which stipulated that a banker’s bonus could not exceed one year’s salary. The UK staunchly opposed that legislation, claiming it would make London less attractive and threaten financial stability. Despite the impact of the financial crisis, the number of bankers receiving remuneration of more than €1 million increased by more than 40% compared to 2010 and in 2017 it totalled 4,859. 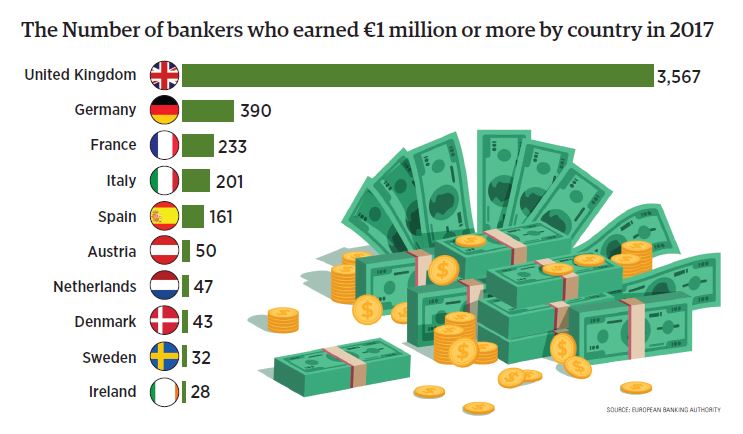