Restaurant Veriko operates on the grounds of the Wine factory.

Restaurant Veriko at the Wine Factory in the heart or Vera, a central and historical district, may have just opened its doors a few months ago, but is already stealing the hearts and minds of those who know great food and exquisite atmospheres. Forbes sent Inge Snip to talk with its founders and try their exclusive dishes and natural wines, and see what the buzz is all about.

The large brick walls surrounding the territory of the Wine Factory show grandeur, history, and have stories to tell themselves. Hidden in plain sight, you couldn’t imagine that beyond the walls a little paradise has nestled itself within the history of the city district itself. It’s neither lavish, nor kitsch; embedded within fruit trees and oaks, I feel as if I am entering a little piece of serenity in the heart of the bustling city.

Taras Kvaratskhelia welcomes me with open arms on the terrace of his restaurant Veriko, located in the heart of the traditional wine factory. He is tall, he has a presence, but with a warm smile, twinkling eyes, and soothing voice, his tallness adds to him being the big brother you’ve never had. And that’s not just how he welcomes me. During the hours I spent on the territory talking about their journey towards building Veriko, he greets everyone walking in with the same warmth and familiarity.

“Everyone who comes here becomes part of our family,” Taras tells me while he is looking to introduce me to the second founder, Giorgi Dartsmelia. But I’ll have to wait to talk to Giorgi, as he’s craftily preparing a cappucine at the bar in the heart of the restaurant. “I think you may not even be able to talk to Mamuka (Mamardashvili),” Taras says about the third founder, “he goes into town every day at 5am to scout for the best produces possible, and comes back at around 11, he’s probably exhausted.”

These are not just a few guys who decided to open ‘a restaurant’, they are committed and involved.

But, as Taras says while laughing out loud, it wasn’t even their plan to open a restaurant, they wanted to start a small bar.

Taras and Giorgi met each other in school, in Sokhumi, Abkhazia over thirty years ago. And then the war started. Having to flee their homes, they lived in IDP settlements in Tbilisi when they were only 16-years-old. Georgia had just a few years earlier declared independence from the Soviet Union; the country had entered a decade of economic malaise, daily power outages, and chaos. And living in an IDP settlement in Vake – in a hospital dorm meant for medical students – added to the hardship for the two friends.

While Taras stayed, Giorgi took a chance and moved to St. Petersburg in Russia, looking for better opportunities. But they never lost touch. ”We called often, and I tried to come back to visit my home as much as I could,” Giorgi tells me when he finds a minute to sit down.

Working in the hospitality industry in St. Petersburg, Giorgi’s dream was to open a coffeeshop in Tbilisi in 2007. But Taras thought he was crazy. “I told him, no one in Georgia drinks coffee outside of the house, everyone stays home to drink coffee,” Taras says about the ‘biggest’ mistake in his judgement. Soon after his dismissal of the idea, coffeeshops started sprouting out of the ground like mushrooms.

The men, who refer to each other as brothers, continued building their careers in their respective cities. While Taras founded the well-known Unicard – a loyalty card for a variety of retailers and products in Georgia – and continued working in the construction and finance industry, Giorgi continued his career in the hospitality industry in St. Petersburg.

But something was nagging Giorgi, he tells me. “I wanted to have something of my own, something special.” And so, three years ago, he looked around for a space, until he found a small 40m2 space under an arch in the heart of the Petrogradsky district in St. Petersburg. bolshoybar was born, and became an immediate hit among the hip and hot in town. The success of bolshoybar allowed Giorgi to open his very own high-end Georgian restaurant in St. Petersburg as well.

But he still couldn’t get rid off that little voice in his head telling him to set something up in his home country.

This time, Taras didn’t say no, and the two went looking for a place to open a small bar in Tbilisi. “Wine Factory sort of fell into our lap, we didn’t plan on opening a restaurant, but with this kind of space, the location, the history, we knew we had to,” Taras tells me. Now their restaurant Veriko operates on the grounds of the Wine factory, together with an charming wine bar called 2Wine and other small businesses.

While we’ve been talking about their journey, the waiter has brought us an amazing variety of dishes. From bazhe – chicken in walnut sauce, to megrelian kharcho – coarse cornmeal, corn flour and Georgian ‘Sulguni’ cheese, every single dish is prepared with love and care. From the watercress topping, to the homemade cheese topping for the salad, the founders tell me quality is their priority number one.

And it’s their two Chefs, Ilia and Nika, who’ve crafted the menus, trained the kitchen staff, and ensure daily that the food that goes out of the kitchen is excellent. The two young men work hard, I can tell from their positive high energy working the kitchen, and the heavenly food on my plate.

While we’re eating. Giorgi walks up to the bar and comes back with a stunning amber colored wine, in a glass you know was made for it. “We combine quality with pragmatism. Each wine deserves its special glass, but water can be drunk in anything,” they are quick to explain me.

The wine opens up all the taste buds on my tongue. And that is for a reason. The founders handselect all the wines, which are sourced from small family winemakers focussing on natural and organic wines – wines which are made through the traditional Georgian winemaking process using a clay pot called a qvevri.

“When a sommelier tells us a wine is good or not, if wine companies want to offer us free products to sell their wines in our restaurant, it doesn’t matter if we personally do not like the wine,” Taras explains me, “we’re only going to offer our guests wines that we personally like, and wines that carry the history of our winemaking country.” The founders visit the small winemakers throughout the country themselves, taste their wines, and decide which ones they will take. It, again, shows the devotion of Giorgi, Taras, and Mamuka to strive for quality with Veriko.

And their efforts have not gone unnoticed. Since the restaurant started operating end of June – which the founders renovated themselves, bringing it back to its historical glory – they’ve not had a quiet night, with both well-known people frequenting their place, as people living around the corner.

“When a regular brings their friends, we know these friends will come back in a day-or-two and become regulars as well,” Giorgi says. “And I am extremely proud to say we’re making an emotional impact with what we offer at Veriko. It’s given us the motivation to start planning developments for the future.”

With a slight buzz from the excellent wine, an extremely satisfied appetite from their delicious dishes, and an inspired mind from our conversation, I leave the place, walking on the cobblestones in their courtyard, knowing I too, will become one of their regulars. 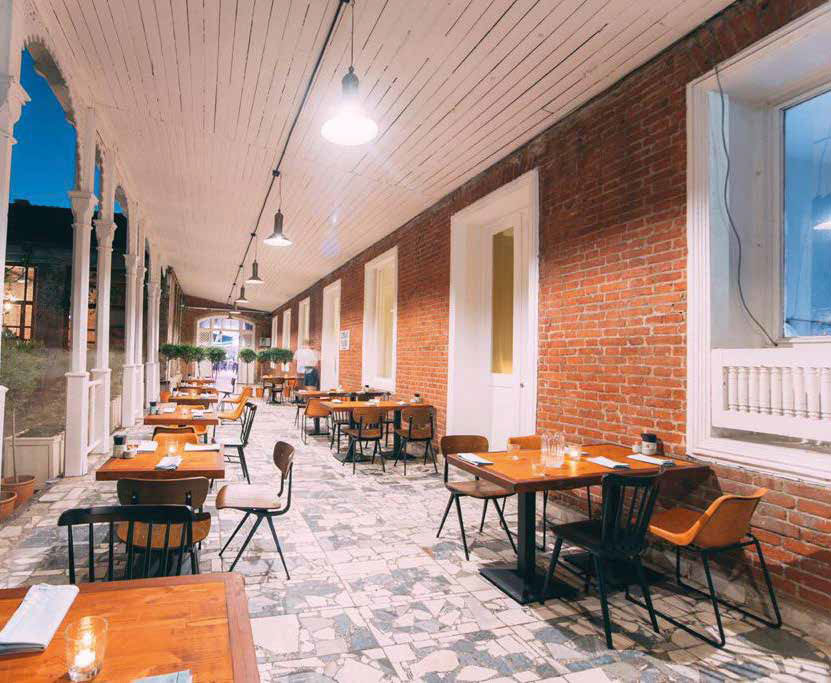