Tina Kvintradze turned her 12 years of experience working in the Georgian banking industry into the basis for her own business. In 2015, she established the investment and consulting company ‘Grow Capital’ together with a like-minded American individual with considerable amount of experience in the investment sector. The company specializes in investment and asset management consulting; it is currently represented in Georgia and the United States under its subsidiary Grow Capital US.

Right from the start of the interview, the managing partner of ‘Grow Capital’ – Tina Kvintradze – confidently explains why she chose a path that involves dealing with serious and scrupulous matters such as offering rewarding investment opportunities to the potential investors, managing their assets and helping them to realize their investment objectives. Her career development began at ‘TBC Bank’; where according to her, she spent one of the most interesting and fruitful phases of her career.

“Here I grew professionally and acquired numerous skills that have helped me in my life and my career. I met a multitude of people – various business leaders, as well as successful and bright individuals, from whom I learned a lot and they ultimately became my friends.”

From working on basic positions at TBC bank, Tina Kvintradze rose through the ranks to become the Director of the bank’s most successful branch. Now as a successful independent manager and businesswoman, she believes that holding the role of Deputy Director, and later that of Director of the branch, was one of her important challenges, as she was in charge of numerous employees and had to think not only about the business, but also about her team members, their growth and their motivation.

Tina herself says that business relations with the investment and consulting firm ‘Sovereign Man’ and its founder Simon Black greatly influenced her own business activities on the initial stages. ‘Sovereign Man’ cares for the financial freedom of its clients and offers them diverse, interesting and profitable investment opportunities on a global scale.

“This young man was an inspiration for me, as I saw how many successful people trusted him. I, also, saw the influence he had on experienced individuals through his sharp mind, precise calculations and the opportunities he offered people.” Simon Black is one of numerous individuals whom Tina Kvintradze met while working at TBC. Tina was invited to his conference in the Chilean capital, Santiago. In front of an audience of 600 guests, Tina spoke about Georgia, its enormous potential, Georgian banking sector and its diverse financial services. On the back of her successful performance at the forum, she later took part in several similar international events in the United States and elsewhere. It became clear that interest towards Georgia was growing, particularly from Americans, many of whom would have previously struggled to point to the country on a map.

According to Tina Kvintradze, there was another period in her career that finally convinced her to take up investment consulting. In 2015, she travelled to the United Kingdom to do a two-year master’s course and met management representatives from large British and international companies such as Vodafone, Citi Bank, Barclays, JP Morgan and others, who inspired and emboldened the founder and managing partner of ‘Grow Capital’.

“I will never forget my time in London; I met so many key decision-makers from interesting and successful international companies. Throughout the studying process, these people shared their stories, challenges, mistakes and achievements. I ultimately decided that on the back of having accumulated numerous contacts and acquired a certain degree of experience in business service, I would start my own business, where I would use my international contacts and be useful for Georgia – my small home country with huge potential.”

While working at ‘TBC Bank’, Tina accumulated a wide range of contacts, including both- people who were looking for investment, and those looking for investment opportunities. Having also familiarized herself with the American consulting system and seen the interest from her international contacts, she decided to radically change her career priorities and use her newly acquired master’s in business administration to found her own investment consulting company ‘Grow Capital’ in 2015 with the help of several reliable and professional international partners.

The business initially consisted of five people, including Tina’s Georgian colleague with banking experience, a corporate lawyer and an Australian business analyst. Now Tina is proud that recently she has partnered with her mentor and influencer, successful American businessmen – George Olsen. Mr. Olsen had an extensive career in the securities business in Beverly Hills, California, and Tokyo, Japan. Changing careers at the utopia of his securities business he entered the oil & gas business and formed Southern Oil & Gas Co., which became one of the largest independently owned oil and gas companies in Northwest Louisiana. After selling Southern Oil & Gas Company George helped other business entrepreneurs as a co-owner, director, educator in the forming of thirty-four other companies. Also, Bright young American businessman – Nick Gordon joined Grow Capital as a co-founder short while ago. Simultaneously he is a co-founder of a venture management private equity firm in the US. Nick has over 15 years experience in sales, management, holding various positions in multi-billion dollar companies. This new relationship expands Tina’s already extensive global network into North America, Asia and the MENA region.

Tina notes that the key component of her success is having a strong team around her. The few people that the company is built on have a wealth of experience, professionalism and skills. Their roles and duties are diverse, but they have one common goal of creating success stories and having a long-term impact on the growth of individual investors, entrepreneurs and businesses of various origins.

“We are constantly on the lookout for interesting business opportunities, startups, existing businesses, as well as already profitable businesses that still have room for growth. Initially we meet with representatives of these businesses, study their potential and possibilities. Then we bring in Peter, our chief business analyst, who is a great asset for our company. He has international experience and has examined many kinds of businesses.”

A vital part of ‘Grow Capital’ is the legal firm SNLG, which is mainly operating in Georgia and the United Kingdom; conducting activities in the fields of corporate banking, financial and commercial law, as well as arbitration and legal disputes. This team of professionals has helped ‘Grow Capital’ arrange numerous successful deals.

Tina regards the recruitment of reliable partners with a good reputation as one of the company’s greatest achievements. These include the international financial institution Equfin. The International Financial Institution – Equfin Holding (formerly known as Continental CC Capital), was established in 2012 and since has been providing services as an online microfinance company. Currently, it has an operational presence in four countries. The holding is steadily increasing its market share in core markets of operations – Spain and Ukraine, however, at the same time it intends to expand its business activities to other countries and regions while maintaining the highest standard of service for its customers. One of the key advantages of working with Equfin is the holding’s transparency, credibility, as well as permanent strive for excellence and maintaining the company reputation. Grow Capital, along with Equfin Holding, has raised several million dollars in financing from foreign investors, whose satisfaction has been monitored permanentlyby both Grow Capital and Equfin.

Another one of Grow Capital’s significant partners is the German internationalization and investment consulting firm ‘GoodbyeMatrix’, whose founder Sergio von Facchin and his team are helping clients protect their assets, residency, second citizenship and company structure based on the flag theory concept. In cooperation with ‘Grow Capital’, ‘GoodbyeMatrix’ offers its customers diverse and profitable investment opportunities in the fields of real estate and finance.

Another important partner for ‘Grow Capital’ in the field and hub ‘Property Georgia’. The Grow Capital team has been supporting ‘Property Georgia’ by being involved in organizing significant events such as the annual international real estate and hospitality forum ‘Building Sustainable & Resilient Cities’.

Despite the above, satisfaction and loyalty of existing clients remains the company’s main achievement for Tina Kvintradze.

“When we offer a project to the investor, we make sure that we follow the project right until the end, meaning that it is not a one-off deal, and we are not simply playing the role of a messenger. We are responsible for ensuring that the business is a success for both parties.”

In 2018, ‘Grow Capital’ expanded its portfolio by moving into the field of agriculture for the very first time. Tina Kvintradze saw great potential in the Northern Californian organic micro-greens production company Grace Greens, as healthy and organic food is currently enjoying considerable popularity in the United States, and in California in particular. According to her, the company achieved rapid growth after receiving funding, and is already supplying dozens of food businesses.

“I began working at the age of 18. My career path was long and difficult, but I must admit that I was fortunate with regards to the companies that I crossed paths with. I must particularly highlight the TBC Bank family, where I grew up.”

‘Grow Capital’ currently operates under the one-window principle. As Tina pointed out, her company’s service does not end with the conclusion of a deal. In most cases, cooperation with investors continues when the deal is signed, in order to ensure that the Grow Capital team’s preliminary calculations are realized.

Tina Kvintradze believes that there are no limits to how far her successful consulting firm can develop in any area of business. Although ‘Grow Capital’ had a narrow focus at the start, the existing demand convinced her that the company should not limit itself to offering the investors opportunities in the financial sector alone. She, therefore, now sees the HoReCa industry as another interesting challenge for her.

“The HoReCa system is still in the process of establishing itself in Georgia. However, its potential is massive, especially in the light of the rapidly increasing tourist numbers. Our next project is, therefore, connected to this particular industry.”

In Tina Kvintradze’s opinion, the prospect of success and the possibility of growth is only to be in constant tonus. In the spirit of pragmatism and patriotism, she wants to see more local projects in her business portfolio. However, plans for wider international expansion of her business are currently in place, especially now that Grow Capital recently expanded into the United States under the name of its subsidiary Grow Capital US, which is primarily focused on supporting the institutional growth of the cryptocurrency marketplace across her broad global network.

“Naturally, I was often offered to stay in England or the United States, and I thought about it carefully. However, modern technology has rendered a person’s physical location insignificant – business can be conducted from anywhere. Our small country has such a great potential that in my view, it is also possible to implement interesting projects from here.”

Finally, when asked whether being a woman in such a diverse business presents any difficulties for her, she happily states that she has personally never encountered any obstacles. On the contrary, she has been able to take advantage of numerous opportunities and realize many goals through her purposefulness, fearlessness, hard work and positive attitude.

“My daughter Anastasia is nine years old and is the main inspiration in my life. I am already teaching her to chase her childhood dreams. She is already a big enough girl to know where the path between the goal and success lies. My life is my future, and my daughter is the main component of this future, and a major inspiration for me”. 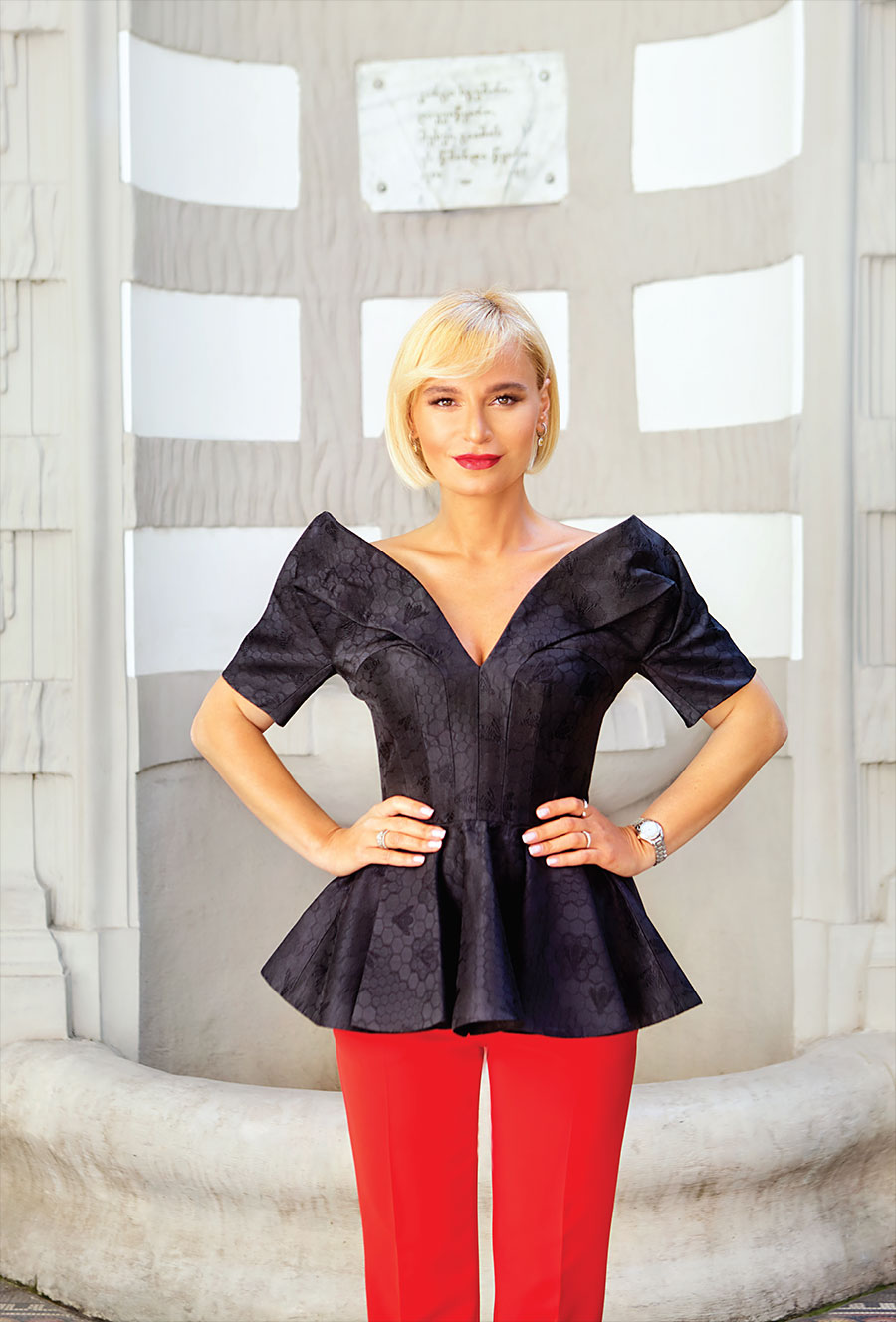