Who were the world leaders when the Berlin Wall fell? How many women have been heads of state in prominent governments? And who are the newest additions to the list of world leaders?

This graphic reveals the leaders of the most influential global powers since 1970. Countries were selected based on the 2020 Most Powerful Countries ranking from the U.S. News & World Report.

Our graphic starts in 1970, a year in which Leonid Brezhnev ruled the Soviet Union, while on the other side of the Iron Curtain, Willy Brandt was presiding over West Germany.

In the U.S., Richard Nixon implemented a series of economic shocks to stimulate the economy, but resigned in scandal due to the Watergate tapes in 1974. In the same time period, China was undergoing rapid industrialization and economic hardship under the final years of rule of communist revolutionary Mao Zedong, until his death in 1976.

In 1975, the King of Saudi Arabia, Faisal bin Abdulaziz Al Saud was assassinated by his nephew. The decade also marked the end of Park Chung-Hee’s dictatorship in South Korea when he was assassinated in 1979.

To cap off the decade, Margaret Thatcher became the first female prime minister of the United Kingdom in 1979, transforming the British economy using a laissez-faire economic policy that would come to be known as Thatcherism.

The 1980s: Reaganomics and the Fall of the Wall

The 1980s saw Ronald Reagan elected in the U.S., beginning an era of deregulation and economic growth. Reagan would actually meet the Soviet Union’s president, Mikhail Gorbachev in 1985 to discuss human rights and nuclear arms control amid the tensions of the Cold War.

The 1984 assassination of the Indian prime minister, Indira Gandhi was also a defining event of the decade. She was succeeded by her son, Rajiv Gandhi for only seven years before his own assassination in 1991.

The ‘80s were clearly turbulent times for world leaders, especially towards the end of the decade. In 1989, the Berlin Wall fell and Germany was reunified under chancellor Helmut Kohl. 1989 was also the year when the devastating events occurred at the Tiananmen Square protests in China, under president Deng Xiaoping. The event left a lasting mark on China’s history and politics.

The beginning of a new decade marked the end of the Cold War and the fall of the Soviet Union, leading to Boris Yeltsin’s position as the first president of the Russian Federation. A sense of peace, or at least the knowledge that a finger wasn’t floating above a nuclear launch button at any given moment, brought a sense of global calm.

However, this does not mean the decade was without conflict. The Gulf War began in 1990, led by the U.S. military’s Commander-in-Chief George H.W. Bush. In the mid-90s, prime minister Yitzhak Rabin of Israel was assassinated by Jewish extremists.

In spite of this, the ‘90s were a time of optimism for many. In 1993, the European project began. The European Union was founded with the support European leaders like the UK’s prime minister John Major, France’s president Francois Mitterrand, and chancellor Helmut Kohl of Germany. 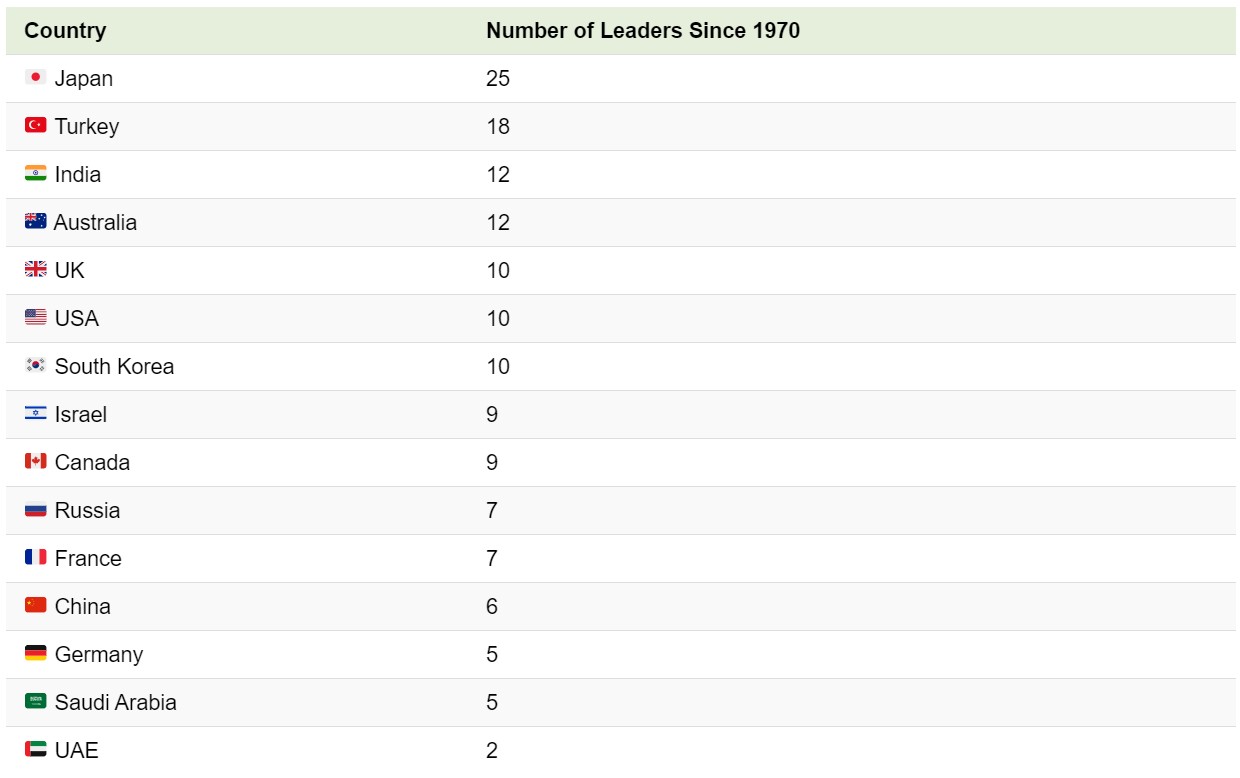 The dawn of a new century had people feeling both hopeful and scared. While Y2K didn’t end the world, many transformative events did occur, such as the 9/11 attacks in New York and the subsequent war on terror led by U.S. president George W. Bush.

On the other hand, Angela Merkel made history becoming the first female chancellor of Germany in 2005. A few years later, Barack Obama also achieved a momentous ‘first’ as the first African-American president in the United States.

The 2000s to early 2010s also revealed rapidly changing power shifts in Japan. Shinzō Abe rose to power in 2006, and after five leadership changes in seven years, he eventually circled back, ending up as prime minister again by 2013—a position he held until late 2020.

The 2010s were more than eventful. The Hong Kong protests under Chinese president Xi Jinping, and the annexation of Crimea led by Vladimir Putin, uncovered the wavering dominance of democracy and international law.

UK Prime Minister David Cameron’s move to introduce a Brexit referendum, resulted in just over half of the British population voting to leave the EU in 2016. This vote led to a rising feeling of protectionism and a shift away from globalization and multilateral cooperation.

Donald Trump’s U.S. presidential election was a shocking political longshot in the same year. Trump’s stint as president will likely have a longstanding impact on the course of American politics.

Two countries elected their first female leaders in this decade: president Park GeunHye in South Korea, and prime minister Julia Gillard in Australia. Here’s a look at which global powers have been led by women in the last 50 years.

No one can avoid talking about 2020 without talking about COVID-19. Many world leaders have been praised for their positive handling of the pandemic, such as Angela Merkel in Germany. Others on the other hand, like Boris Johnson, have received critiques for slow responses and mismanagement.

The year 2020 packed about as much punch on its own as an entire decade does, from geopolitical tensions to a nail-biting 2020 U.S. election. The world is on high alert as the now twice-impeached Trump prepares his transfer of power following the riot at the U.S. Capitol.

The newest addition to the ranks of world leaders, Joe Biden, has recently taken his place as the 46th president of the United States on January 20, 2021.

This article was originally published on Visual Capitalist by Avery Koop.