The resumption of supplies of Turkmen crude oil to the south, after a long period of anti-Iran sanctions, could have been reassuring,if there will be no several serious “but”.

Deliveries of Turkmen crude oil in early August were carried out without the proper permission of the authorities of Turkmenistan. Customs and cargo documents were issued by Dragon Oil for the transit of these cargoes to Europe via port of Baku, which made the tankers perform very dubious manoeuvres. “VF Tanker-20” and “VF-Tanker-13” used to leave the port of Aladja in the direction of Azerbaijan and then turn to Iran soon after exiting the territorial waters of Turkmenistan. Most probably, shipowners and cargo owners were trying to hide true destination of the cargo – Iran.

Later on, scheme was modified, and now loading documents are issued directly with the discharge port Neka, Iran. Therefore, “Dragon Oil”, “ENOC” and “VF Tanker” admitted, that crude oil is being delivered to Iran.

Sources in Iran informing, that receiver of the cargo is «NICO Naftiran Intertrade CO», which is already under American sanctions.

Despite the fact, that “secondary sanctions” from Iran have been lifted, US sanctions continue to be in full force up to date. Dragon oil and ENOC risk to lose their American partners (service companies Schlumberger, Halliburton, Wetherford, etc.), lose support of financial institutions and evento get on the sanctions lists of OFAC (Office for Control over Foreign Assets of the US Treasury).

US banks, that are correspondents of all other international banks for US dollar transfers,still have the right to block any transactions even indirectly related to Iran. In this regard, banks and financial institutions, even those without offices in the US, are still wary of financing Iranian business. For the same reasons, international trading companies may completely reject the services of shipowners involved in deliveries to/from Iran.

It became known, that “V.F. Tanker Ltd” was not the sole shipowner approached by ENOC for transportation of Turkmen crude oil. Another Russian shipowner, actively working in the Caspian region, refused to transport the cargodue to the Iranian destination.

But it seems, that “V.F. Tanker Ltd” is not afraid of possible consequences. Now “VF Tanker-13” and “VF-Tanker-20” continue to load crude oil for Dragon Oil and ENOC and deliver it to Iran, and another vessel “VF Tanker-8” is on its way to Aladja.

It is to be recalled that “V.F. Tanker Ltd” is part of the international transportation group Universal Cargo Logistics Holding (UCL Holding), owned by a prominent Russian businessman Vladimir Lisin. This year Vladimir Lisin took the 3rd line of Forbes list among the richest people in Russia and the 57th line in the world list.

It became known not long ago about the intention of UCL Holding to conduct an IPO (initial public offering). Already in 2011 Vladimir Lisin announced his wish to bring the companies of the Holding to the stock exchange, but so far IPOs have not been conducted. At the moment, UCL Holding actively communicates with potential investors – both Russian and foreign. And right now scandals related to documentary fraud, supplies to Iran and “blacklisting” of the shipowner are, of course, highly undesirable.

The respective documents are given below: 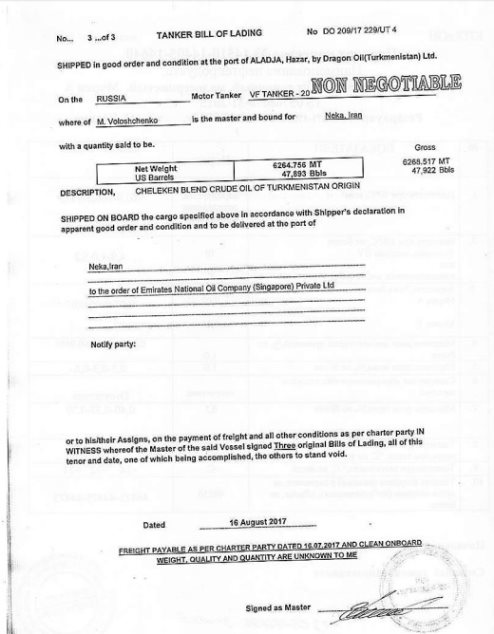 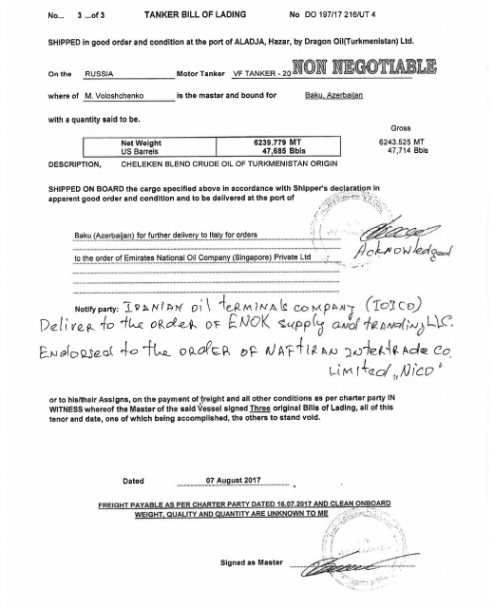 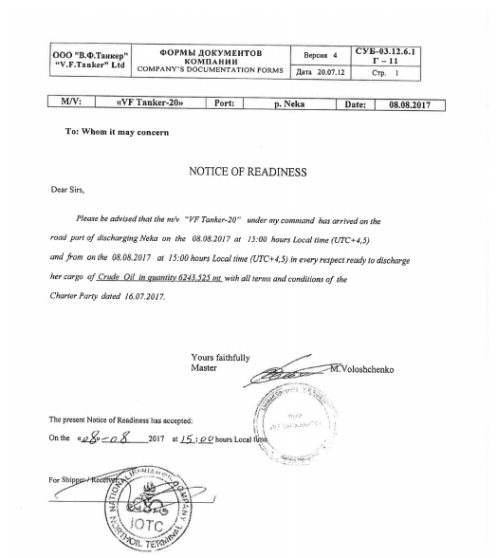