Skip to content
მთავარი
English
You Have a Hidden Treasure in Your Company and Simon Sinek Tells You How to Find It
კითხვის სავარაუდო დრო 4 წუთი
Sami Cohen
აპრილი 29, 2021 at 4:46 pm

In his latest book The Infinite Game in a chapter about Trusting Teams, Simon Sinek writes the story of Shell URSA team and of how Claire Nuer, co-author of LEO Methodology with Sami Cohen, trained them to achieve tremendous results while feeling safe at one of the most dangerous jobs in the world.

Giorgi is the CEO of a successful company. He follows many courses and keeps himself up to date with all management trends. He is convinced that his workforce is at the basis of the company’s success, but before reading Simon Sinek’s latest book – The Infinite Game – he was not aware of possessing a Hidden Treasure.

Can an unmotivated employee perform at his best? Of course not. When Giorgi read Gallup’s survey about employee engagement, he was shocked. He couldn’t believe it. He never guessed that 70% of all employees don’t like their work and some 20% are actively disengaged – meaning that they are working against the company, either speaking ill of their boss or of the company itself.

He had always known that employee engagement can be a gold mine, but he never guessed how big that mine is. It is huge! So, he thought that if he found a way to address it effectively, his company would gain a lot from it.

He was conscious that most employees put their interest before the interest of their team. He was conscious that his managers were in competition with one another in order to get his praise. He liked that they had a certain level of fear, which gave him leverage on them. He never thought that this level of fear was cascading on the levels underneath, creating a non-trusting culture. 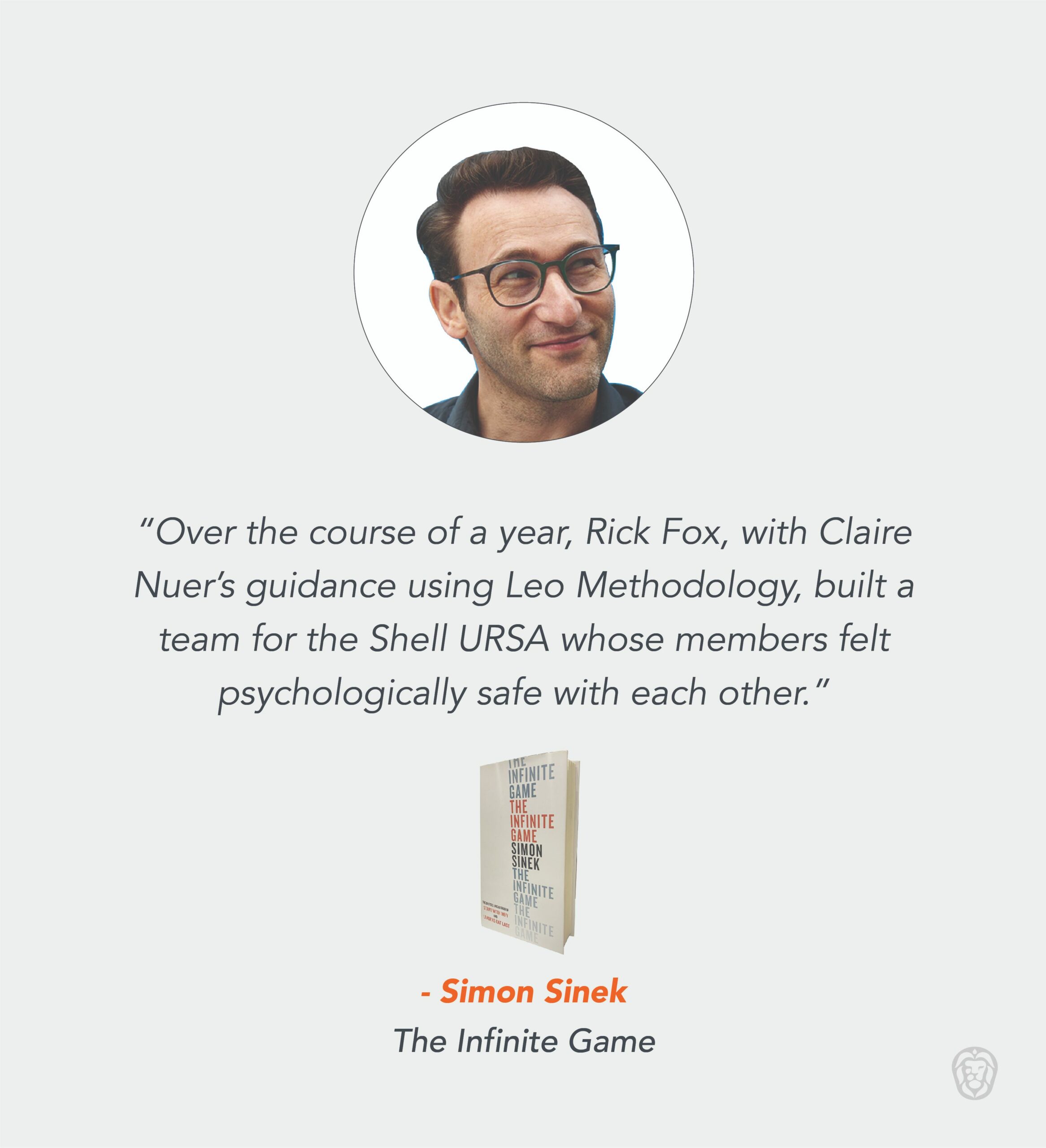 You can imagine his joy and surprise when he read The Infinite Game. He realized that what he thought effective actually had a boomerang effect on employee engagement. How could he expect his employees to be engaged in a culture of fear? Fear of making a mistake, of not knowing, of admitting failure, of asking for help, of losing the competition.

Before reading Simon Sinek’s book, he had no clue about how to train his managers to find this Hidden Treasure. In his book Sinek illustrates how the forty people composing URSA team – Shell’s largest oil rig in the world, of the value of 5,5 Billion USD –  learnt to trust one another and to become a Trusting Team, by using Leo Methodology over a one-year program.

Giorgi loved a specific paragraph describing the culture of a Trusting Team:

„When we work in a Trusting Team we feel safe to express vulnerability. We feel safe to raise our hands and admit we have made a mistake, to be honest about shortfalls in our performance, to take responsibility for our behaviour and ask for help.

Asking for help is an act that reveals vulnerability. However, when we are in a Trusting Team we do so with the confidence that our boss and our colleagues will be there to support us. ‘Trust is the stacking and layering of small moments and reciprocal vulnerability over time’ says Brené Brown, research professor at the University of Houston, in her book Dare to Lead. ‘Trust and vulnerability grow together, and to betray one is to destroy both.“

This paragraph highlighted the Trusting Team culture. For Giorgi the question now was, which kind of management did he want? Did he want his managers to be genius leaders with hundreds of helpers – thus continuing to expand the gap between the leader and the helpers – or did he want to develop what Simon Sinek calls Trusting Teams?

The answer was not obvious to him. He was already successful, so why rock the boat? And anyway, how to create these Trusting Teams that Simon Sinek was talking about? Giorgi also realized that he would probably look less ‘indispensable’ if his teams were more independent, motivated and responsible. Would he lose his image of charismatic leader? He didn’t like this thought.

But he started thinking:

How would it be if my team leaders were engaged in creating a culture of trust and support? If they chose emulation and doing together over competition among each other and separation? What if people woke up in the morning knowing they belong to something bigger that they are creating together? What if they felt emotionally safe to be vulnerable and grow? What if they were inspired, fulfilled and realized?

He was surprised to perceive the difference between succeeding by having a competitive culture as he always pursued, and succeeding by having teams of truly engaged people. He also realized that he never took this goal seriously. Now, when he imagined inspiring the cultural change that would make more employees go to work feeling trusted and valued, and then return home feeling fulfilled – like they have contributed to something greater than themselves – he was really inspired.

He felt so good thinking about all this, that he even thought of letting go of the superhero image he has now. Also he thought that well, now that he had this new desire, there were three options:

Giorgi was happy with his thinking process and reached a decision.