The official document published by the EU notes Anaklia Deep Sea Port as a top priority project in Georgia. The amount of financing of the second phase of construction will be about €233 million. In addition, EU is committed to finance the construction of a new railroad with 100 million euros. New railroad will connect Anaklia to the central railroad system of Georgia.

Anaklia Deep Sea Port will be constructed in 9 Phases. The total investment value of the project is $2.5 billion USD.

Projects identified as top priority are:

European Commissioner Johannes Hahn, responsible for European neighbourhood policy and enlargement negotiations, said: “The completion of the Indicative TEN-T Investment Action Plan is a joint commitment to deliver tangible results for citizens across the region. The plan will assist decision-makers in prioritising strategic investments in transport infrastructure with the aim of completing the TEN-T network defined as one of the 20 deliverables for 2020 in the Joint Declaration of the last Eastern Partnership Summit in Brussels.”

European Commissioner for Transport Violeta Bulc added: “Enhanced transport connectivity both within the Eastern Partnership region, and between the EaP region and the EU has the potential to bolster economic growth and create job opportunities. The plan shall also serve to highlight the importance of road safety as well as digital solutions in new projects, and to align design standards with current EU practices.”

The projects included in the investment plan were identified together with the Eastern Partnership countries and with the assistance of the international financial institutions. Those projects will make possible the construction and rehabilitation of new and existing roads, rail, ports, airports as well as logistical centres and border crossing points. The priority investments include both short-term projects to be completed by 2020 and long-term projects aiming to improve transport links on the TEN-T by 2030. Along with infrastructural investments, the plan aims to bring forward key reforms for the transport sector and improve road safety in the region. The development of project on the TEN-T is expected to foster regional development by improving access to economic opportunities, harnessing the benefits of industrial agglomeration and increasing market competition. 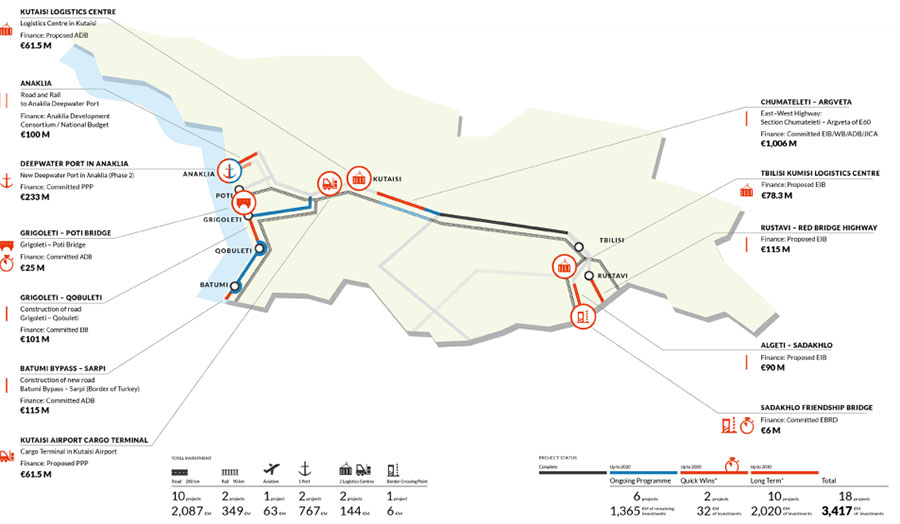