Skip to content
მთავარი
English
Export Of Wines From Republic Of Georgia To U.S. On The Rise
კითხვის სავარაუდო დრო 4 წუთი
Mike DeSimone and Jeff Jenssen
აგვისტო 17, 2019 at 10:41 am

Following a three-year average growth surge of 54 percent year over year, wine exports from Georgia to the United States grew by 88 percent in the first half of 2019. This statistic was recently released by the country’s National Wine Agency, a division of its Ministry of Agriculture. Due in part to this impressive market growth, the U.S. is now Georgia’s 10th largest export market for wine. Georgia exported 466,056 bottles of wine to the United States in 2018 with a total ex-cellar value of $2,335,867. In 2017, the net profit margin for Georgia’s wine sector was 20.6 percent, while the net profit margin for the general business sector within the country was just 8.4 percent.

Julie Peterson, Managing Partner of Marq Wine Group, which has been spearheading marketing and trade strategy for the region for the last four years, stated that the increase can be pegged to three trends in the wine market. “Wine professionals have discovered Georgia’s indigenous varieties, which reflect a deep sense of place. There is growing interest in low-intervention wines, and because Georgians have continually produced wines using natural, ancient methods for 8,000 years, they stand at the epicenter of this practice. Finally, the ‘amber’ or skin contact wine category, which emerged a few years ago, continues to build exponentially.”

The first step in gaining consumer recognition for an emerging wine region or style is via sommeliers, who can introduce that wine to their customers one table at a time. Jeff Berlin, wine director at A Côte in Oakland California, which has several Georgian labels on its list, is a strong proponent of wine from Georgia: “Nothing helps sell a wine like a good story, and in Georgia, stories grow alongside of every vine. That traditional Georgian qvevri wine, fermented and aged on the skins for significantly longer periods of time than the wine that most of us are accustomed to drinking, has penetrated American wine consciousness so rapidly, is a testament not only to its unique and exotic qualities, but to the powerful and captivating stories that accompany every bottle…” 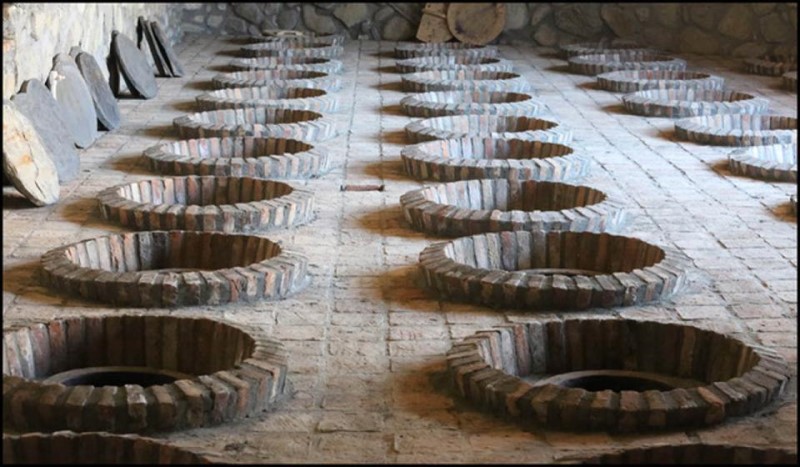 Zwann Grays, wine director at Brooklyn, NY’s Olmsted, fell in love with Georgian wine after a visit to the country’s wine regions. “I found visiting Georgia to be an immense educational experience. It’s cool because sommeliers tend to taste and study a lot of the same wine regions, but Georgia not so much… There remains a freshness and an authenticity to the wines that pair so well with Georgian food, which is delicious, but also foods from various other cultures. You take it to a dinner party, and it will be [among] the more interesting bottles, guaranteed.”

Georgia boasts an astounding 525 grape varieties currently recorded, with 45 actively used in commercial production. The main red grape grown here is Saperavi and the primary white variety is Rkatsiteli. More than 123,000 acres are planted with grapevines across ten official wine regions. Located about 620 miles due east of Rome, the petite country of Georgia, which is just slightly larger than West Virginia, has a centuries old home-winemaking tradition. Bordered by Azerbaijan, Armenia, Russia, Turkey, and The Black Sea, Georgia was on the historic Silk Route. While this location at the crossroads of civilization contributed to the country’s rich cultural, artistic, culinary, and religious fabric, it also attracted multiple invasions throughout the ages. Persistent outside influence knit together a strong Georgian identity while also creating a home winemaking tradition.

Today, Georgia’s wine industry has been transformed from a small scale, home-based enterprise into a dynamic industry, with winemakers producing some of the world’s most extraordinary and interesting fine wines using both qvevri (large clay amphora) and more traditional European winemaking methods. There are now more than 100,000 registered home wineries and 500 registered wine companies in this tiny country that is considered by scholars to be one of the birthplaces of wine. Archeological evidence shows that wine has been made here since the sixth century BCE.

Eighty-five percent of Georgia’s wine goes to the export market. Prior to the Russian embargo on trade with Georgia in 2006, Russia was the main consumer of Georgian wine, responsible for 92 percent of its wine exports. The embargo forced the Georgian wine industry to become more competitive, causing winemakers to bring their quality up to global standards while sales and marketing departments had to look beyond their immediate neighbors. Today Georgia exports wine to 53 countries worldwide. Its major markets are the United States, United Kingdom, the European Union, and Asia. Even though Georgians drink wine at home, the majority of the wine consumed with family and friends is homemade rather than commercially produced, so the winemaking industry remains dependent on exports. 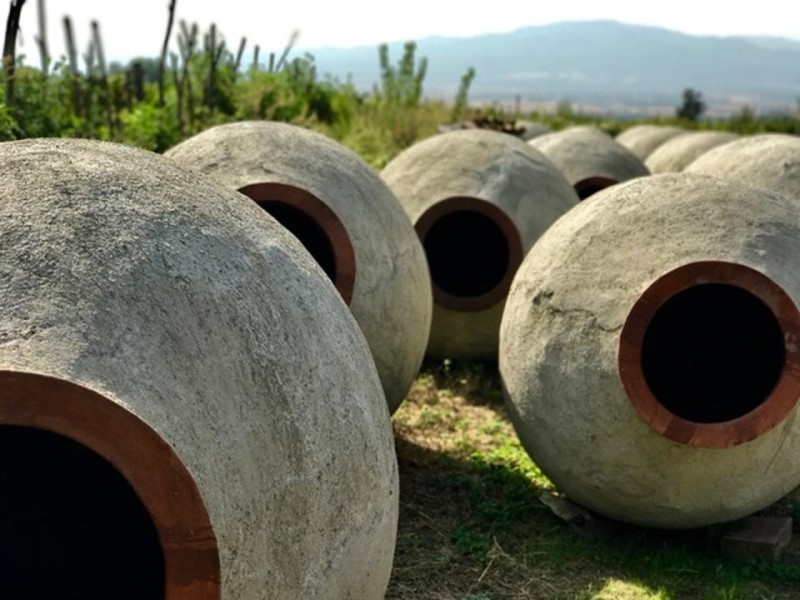 For over 8,000 years Georgians have made wine in qvevris, giant clay vessels lined with beeswax and buried underground to keep temperatures constant. Winemakers ferment the juice in these vessels, simultaneously allowing the grape skins to macerate with the juice, which turn what many international consumers expect to be white wines to an amber color. In addition to keeping track of winemaking statistics, the National Wine Agency of Georgia works to maintain the country’s qvevri winemaking tradition, control the quality of all Georgian wines, and promote these wines globally. In 2013 qvevri winemaking, which defines the lifestyle of families and communities and forms an inseparable part of their identity, was added to the UNESCO list of traditions that form the “Intangible Cultural Heritage of Humanity.”