1409 employees, 20 years of experience, 15 countries around the globe and 11 different activities - such is the company that Oleg Ossinovski, Estonia’s richest man has founded and runs to this day. With major projects already in Georgia and still counting, his business relations with the country amount to more than a decade.

"Corruption seems to be slowly gaining momentum in Georgia” – this loud statement comes from Oleg Ossinovski, the investor who, rather than leave Georgia after doing business here for more than 10 years, has actually diversified the areas of investment and continues to invest till this day.

We first heard Ossinovski’s name in association with Georgia in January 2014, although his railway transportation company Skinest Rail already had a representation in the country by that time. The businessman, who was listed as Estonia’s wealthiest man by the Estonian business journal Äripäev at the time, said that his investment company AS Skinest Group was interested in the hydroelectric sector, and was planning to invest $200 million in hydroelectric power plants.

Those plans have already been realized and to this day, besides, railway company Skinest Rail, AS Skinest Group has two major projects in Georgia, including a 6,6 MW installed capacity hydro in Kintrishi and Magana, western Georgia; and Tbilisi Hills Golf & Residences. “I came here 10 years ago and fell in love with Georgia,” – says Ossinovski.

Not this love for the country, but still much has changed in these 10 years for how he sees the business environment and its challenges in Georgia. Ossinovski says, foreign investment is of less priority for today’s government. To him, such an attitude towards foreign investors and their investments is a mistake, since the same profit as in Georgia can be obtained in other countries with lower risks.

Against all odds, Oleg Ossinovski continues to diversify his portfolio of investments here at least with 1 billion euros over the next decade in his latest project, with 33 million already invested on the first stage in the last three years. One reason for such persistence might be his business philosophy which is built on the values of fairness and loyalty, focus on results and attention to details - especially, when it comes to risks and how they should be treated: “I’m not scared of risks. I don’t understand, what’s there to lose. Money? It’s not everything. When money is not the final goal, you become very tolerant to risks”, - says Ossinovski. He believes the process of doing business itself should be of the highest priority: “First, there’s nothing, and then you build, you create something – this is very satisfying”.

As an experienced businessman, Oleg Ossinovski, pays close attention to diversification. This is well reflected in the services that his global company AS Skinest Group has to offer, including complete railway solutions, energy solutions, real estate and even golf courses. How he develops golf culture in Georgia is just one example, reflecting his attitude towards risks and the ability to turn challenges into opportunities.

Oleg Ossinovski’s golf course, which in coming 10 years will be surrounded by a whole new city named Tbilisi Hills, is on a territory that a Spanish company was supposed to develop. At that time the Saakashvili government had decided to popularise golf in Georgia, so the Spanish investor was able to purchase the land at a discounted price. The company accumulated debt to the government while failing to fulfil its investment obligations. Therefore, the land was taken back into state ownership.

In 2014 Deputy Minister of the Economy Dimitri Kumsishvili approached Ossinovski with the offer to develop the 331-hectar plot of land. “The proposal was as follows: we would have to instantly cover the debts accumulated by the Spanish firm, as the Ministry of the Economy had planned to increase investments and the GDP during that year,” – Ossinovski recalls.

Covering debts, however, was not the only term that the investor had to meet: “We also had to fulfill the investment obligations associated with the development of golf in a short period of time. Mr. Kumsishvili argued that we were still getting this land for a cheap price. However, the term ‘cheap’ is always subjective – for the seller, the price is always cheap, while for the buyer, it is always expensive”.

Investor recalls how he sat across the table from the Deputy Minister of the Economy and discussed the terms of the contract with him. “In the end, the contract was written. The contract was signed only due to Kumsishvili’s focus on the final result. He is a very strong negotiator, he bargained for the Georgian state all the best things that could be obtained, the talks were very tough but very right for the country, Georgia got everything it wanted ”Ossinovski remembers.

Once an agreement was reached, the minister managed to obtain government approval for the contract by the end of that same day. “It was the quickest of investment agreements” – says Ossinovski: “If this had been a conventional process, then both sides would have devoted substantially more time to preparing the contract. I may not have started the development of this location with golf but added this element at a later stage”.

Nonetheless, today in about 15 minutes from the centre of the city, you can find 100 ha territory occupied by the professional golf course. Activity here has already begun. You will notice a multitude of local and foreign faces (including families) at any time of the day, but especially in the afternoon, when Georgian and foreign coaches are giving free lessons.

Ossinovski believes that golf is for everyone, not only for the rich: “What you really need is spare time, in order to ensure that you can experience and appreciate the thrill of this game to the fullest” – he says. Business-wise, Ossinovski says, projections show that 10 big golf courses of international standards in Tbilisi could supplement each other due to the unique nature of this sport where competition is virtually non-existent: “Golfers play at the different courses continuously, as they primarily compete against the course itself, rather than against each other”.

In addition to this, the investor believes that the world develop  ment copies its stages in any country across the globe and golf cannot be an exception. “It might not become the most popular sport in the country, but there will always be sufficient number of people, including local citizens, who want to play golf here”, - says Ossinovski.

Coming back to our conversation on risks, the investor says, all was worth it. “Yes, while working on a business plan, you do have a grid with risks written on top of it. And you may have a long list there. But you look at it and just see through it. Otherwise, you will have to stand still” – says Ossinovski.

Excessive bureaucracy and lack of communication is what he believes represent the biggest challenge for doing business in any country, and, to him, Georgian government should be aware of it at any stage of the economic development. ““Political will is very essential. It is very important to be able to clarify things with decisionmakers directly, if needed” – says Ossinovski, adding that in this context, investment agency Invest in Georgia was of great help. “It is good when one individual is working specifically with foreign investors” – says Ossinovski, adding that Giorgi Pertaia, then-head of the agency was very effective in providing a helping hand on any issue almost instantly. “I think Georgia should maintain this big advantage that it has compared to the rest of the world, including Estonia”, - says the investor, adding that overall, it was during Gharibashvili that the government was especially, business-oriented, and investment decisions were made in a quick and easy manner.

Valuing time of investors turns out to be a core problem in dealing with courts: On the one hand, Oleg Ossinovski seems to have enough faith in just approaches of Georgia’s judicial system towards foreign investors in this country, which is reflected in his long-term plans of continuing to do business here; but on the other, “the biggest problem for Georgia is that business disputes take extremely long” – he says.

Ossinovski draws this conclusion on his own experience with the railway: “We had an issue with the railway authorities, which we could not resolve through negotiations, so the case went before court. I must say that this is a civilized dispute, in which the court partially ruled in our favour. We then appealed the aspects of the ruling that were not in our favour. I did not get the impression that the railway authority as a state company was favoured by the court. On the other hand, it took us three years to get the first hearing, which is an incredibly long period of time”.

Mounting regulations seem to be another factor, which also slows the investing process – especially, in construction and development sector. As Ossinovski analyses, regulatory burden in Georgia has been steadily increasing, partly because of the harmonization process with EU and partly due to the inherent nature of regulations. “The main problem with regulations has always been the fact that existing regulations are rarely being abolished, and new ones are being added as an additional layer; then the regulator steps in, which means that soon the regulator’s regulator will be needed and so it goes. Estonia is a good example. It is already considering deregulation of the construction sector, as there are numerous projects that are virtually standing still” – says Ossinovski.

Currently, with the plans for the whole new city in about 15 minutes from the Freedom Square underway, excessive regulations and bureaucracy could become an important barrier for the investor. According to the plan, the first residential areas are to be added starting from autumn 2018. As Ossinovski revealed to Forbes Georgia, he will personally become the first resident at Tbilisi Hills this year. In about 10 years, 5 thousand people should have their keys to the 331 hectares of green space and golf. “We are building a city with all the necessary features” – says Ossinovski.

He is confident for competition. “Due to the concept that we provide, we don’t have competitors on the market”, - adds the investor, further explaining his bold statement: “If you want to live outside Tbilisi, but still very close to the city centre; if you choose forest over the loud and dusty streets of the capital; then there’s only one option and it’s ours, since we are the only ones to provide a whole package of comfortable living, golf, clean ecology, big distances between the homes and all of this, not exceeding the average price on the market”.

Coming back to the currently one of the hottest debated issues of regulating the real estate market and the obligations that Georgian government has taken in the context of DCFTA, Oleg Ossinovski has a humble advice to share: “I do not wish to tell the government what to do, but I personally believe that Georgia should not implement all EU regulations simultaneously. This would be a serious blow for the local market”- says Ossinovski. 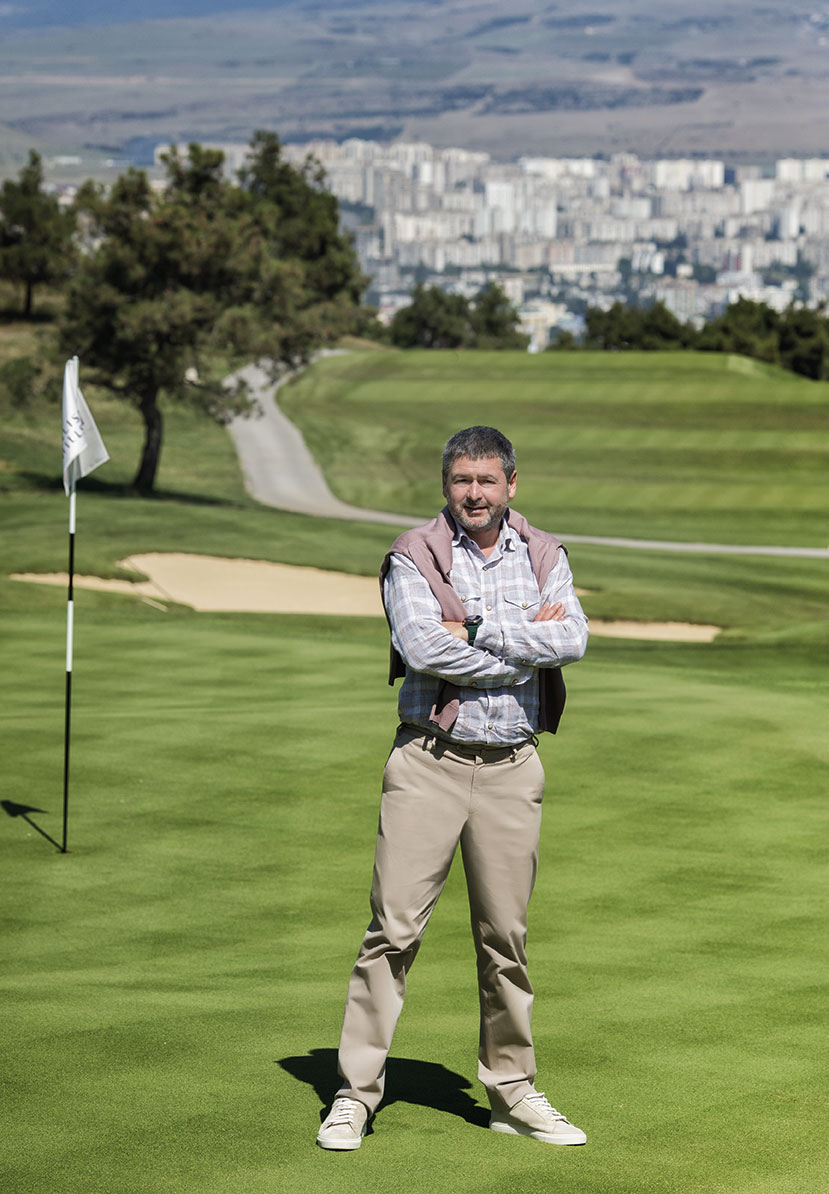