Employment remains one of the most pressing problems in Georgia. Despite the records published by the National Statistics Office, which show that the unemployment rate decreased to 12.4% in 2014, Georgia still has the highest unemployment rate in the region.

The Compensation & Benefits Survey conducted by EY Georgia revealed a number of interesting trends in the Georgian labor market in 2015.The survey was conducted with the participation of 36 leading companies (employers) operating on the local labor market. 30% of the participating companies represent the banking and finance sector; 20%represent the pharmaceutical sector; 13% the consumer goods sector; 7% the production sector; 7% trade; 7% HORECA (Hotel/Restaurant/Café) sector, 7%; transportation and logistics; 3% telecommunications, and 6% other sectors.

The new data was quite different from the previous year’s figures. Last year, only 68% of employers revised the salaries of 60% of their employees. Such actions can be explained by the willingness of certain companies to compensate for the reduced purchasing ability of their employees. Interestingly enough, local employers plan an 8% average increase in salaries for 2016.

The annual compensation data indicates that there is certainly a salary increase tendency. It should also be mentioned that the range between salaries in each company has decreased and there is a positive tendency towards pay equalization. The ration between the pay of mid-level management and specialists is from 4 to 2, 8 (median). As for the ratio between the highest and lowest pay, this has decreased twice from 32 to 16 (median).

Employers increased salaries partly by reducing noncash benefits. However, the main components of the benefits, including medical insurance, training, transportation of employees, mobile phones and company cars, have remained almost unchanged. The optimization of expenses was carried out at the expense of reducing the following types of benefits: sports, tea/coffee, corporate and team events.

It should also be mentioned that employees are increasingly given more flexible working schedules, and the ability to work from home. In addition, the practice of irregular working hours has significantly decreased. On the one hand, this trend might reflect the good will of the employer in an effort to improve the work schedules of their employees. On the other hand, companies that pay their employees for overtime, may have implemented these changes in an effort to cut costs.

Compared to the previous year’s data, employee turnover ratio on the labor market has doubled, reaching 16%. It is notable that 10% of the overall 16% is voluntary turnover ratio. Given the fact that 40% of the companies plan to increase their staff, employers are increasingly engaged in finding new staff to replace their employees, and respond to the company’s increased need for additional staff. Therefore, the number of monthly vacancies has increased from 8 to 19.

It should also be noted that the survey is based on the data collected from the leading companies on the local market, and these trends may, after a certain period of time, partially affect the entire labor market.

EY Georgia will continue to update Forbes Magazine readers with information regarding the latest trends on the labor market, and other pressing issues. 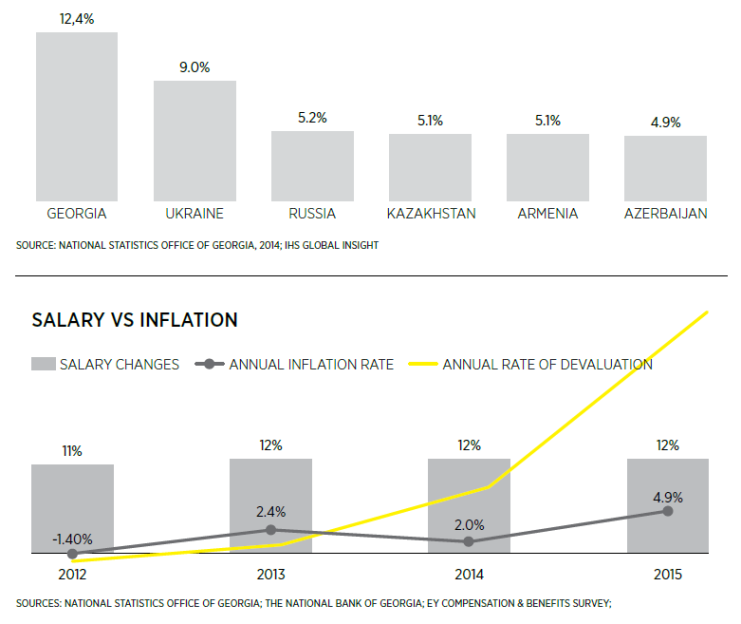