The International Budget Partnership (IBP) published the results of the Open Budget Survey 2017, according to which results, Georgia with 82 points holds 5th position among 115 countries of the world.

With this position, Georgia becomes one of the fully open countries. Georgia is the only country of the region, which moved into this category, standards of which, according to the recent survey, are satisfied by only five countries in the world.

The above survey and determination of the Open Budget Index are conducted every two years, organized by the International Budget Partnership.

The survey evaluates openness of budgets of all the countries in the world based on same methodology. Points are calculated for each country separately, as well as average for the world, which allows the countries to evaluate their processes compared to other countries and the global average. It is important to note that the survey is not conducted through self-assessment by the government and the questionnaires are filled out by independently selected NGOs (in Georgia, Transparency International, Georgia). Accordingly, the results depend upon information provided by civil society and independent experts, operating in the country.

The supervision of budget management.

High scores of budget openness (82 of 100) means that Georgia publishes budget information timely and fully. However, Georgia’s score for public participation to budgeting process is quite low (22 of 100). It should also be noted that according to the 2015 survey, Georgia had 46 points for public participation to budgeting process.

The survey was first published in 2006 and back then Georgia held 30th position with only 34 points (with updated methodology) and was among least transparent countries.

By the 2015 survey, the country moved to the group significantly transparent countries for the first time and with 66 points, held 16th position among 109 countries. 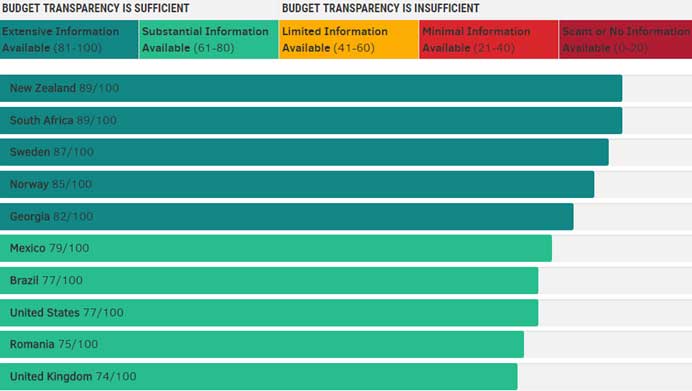