It’s still raining money for the world’s most valuable soccer teams because they attract an incredible number of fans inside stadiums and in front of televisions, particularly for the Champions League.

Sponsors salivate, paying more and more money to attach themselves to these teams, knowing their players are global billboards whose likenesses are embedded in the hearts and minds of billions.

Real Madrid reportedly sold its sponsorship rights to Providence Equity recently for an upfront payment of $224 million over the first four years of the deal. Last season represented the start of Barcelona’s $246 million shirt sponsorship deal with Japanese e-commerce group Rakuten, as well the start of a ten-year kit agreement with Nike worth at least $174 million annually. At the end of 2018, Juventus announced a kit deal extension with Adidas worth $457 million over eight years. 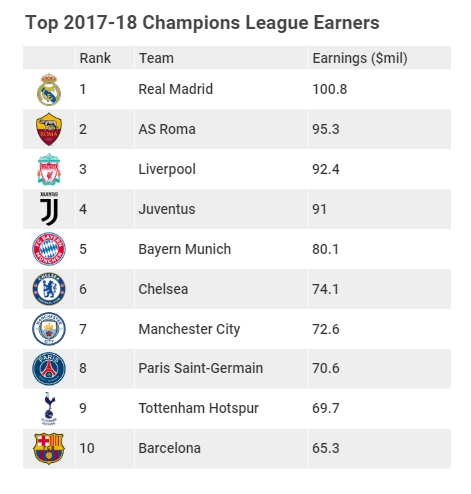 After a two-year hiatus as soccer’s most valuable team, Real Madrid is back on top, worth $4.24 billion. Real Madrid reaped $100 million from winning its third consecutive Champions League in 2018 and is reportedly on the verge of signing the most lucrative kit deal in soccer history—$1.8 billion over 12 years with Adidas.