Of the 2,153 billionaires on Forbes’ 2019 list of the world’s richest, a record 71 members make up an even more select group—the under-40 set. Of this young group, there are 21 newcomers from 18 countries, and 2 are returnees.

More than half—41—are self-made billionaires. Of these young entrepreneurs, 30 minted a fortune in the tech industry, followed by 7in fashion & retail and 7 in real estate.

Of the 41 self-made under 40, all are men except Kylie Jenner, founder of Kylie Cosmetics, who makes her debut this year as the youngest self-made billionaire ever. The remaining 14 female billionaires under 40 inherited their fortunes.

Jenner displaces John Collison, 28, as the youngest self-made billionaire. He cofounded payments company Stripe with his older brother Patrick Collison, who is 30. John is now the next-youngest self-made billionaire after Jenner. Stripe’s fundraising round in September 2018 valued the company at $20.25 billion, boosting the brothers’ net worth to $2.1 billion each, up from $1 billion a piece a year ago. John Collison is just a few months younger than Snap cofounder and CEO Evan Spiegel, whose net worth has fallen to $2.1 billion, down from $4.1 billion last year in the wake of waning user growth and stiff competition from increasingly popular social media apps such as Instagram and TikTok.

In all, the 71 youngest billionaires in the world are worth a collective $299 billion, up from $265 billion last year when we found 63 under 40. Of those on both years’ lists, 17 are richer, while 24 are poorer. Forbes used stock prices and exchange rates from February 8, 2019 to calculate net worths. 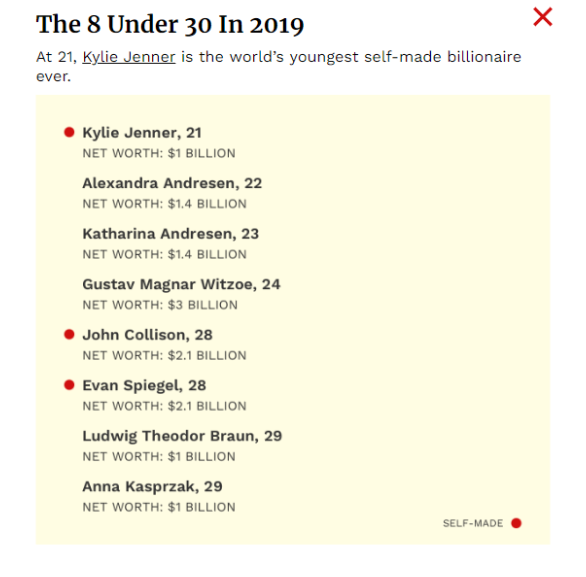